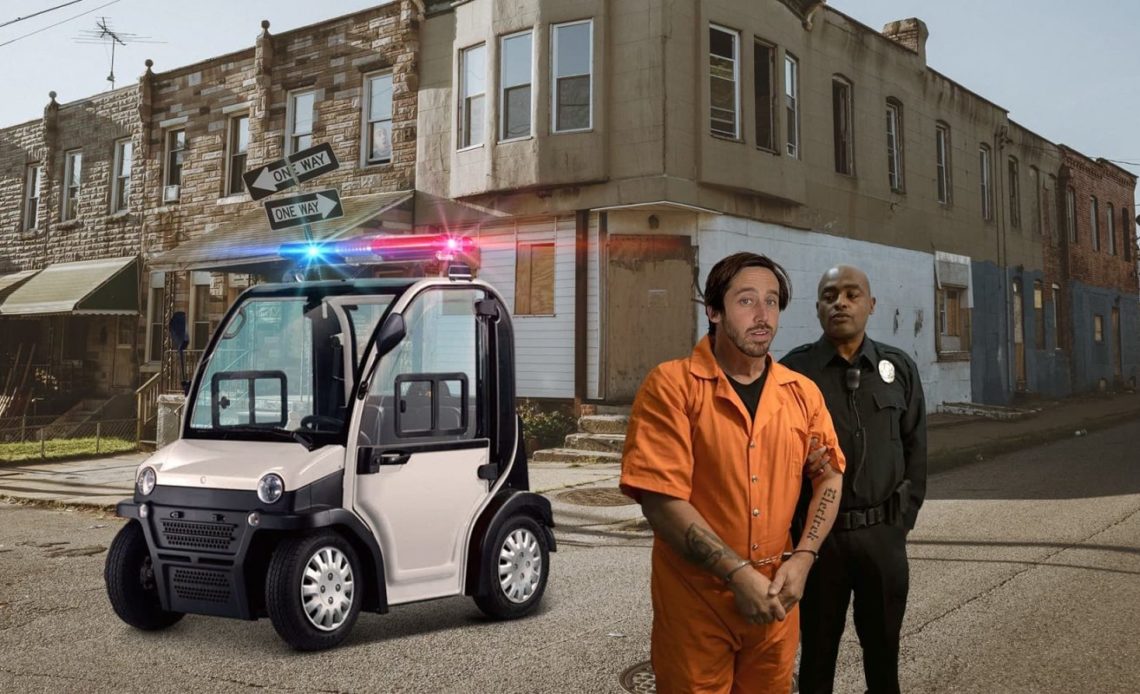 In today’s age of police militarization, perhaps it’s time to take a step back and see how we could downsize some of the police gear used on our streets. Who needs a three axle gas-guzzling police tank when you could have a tiny electric police coupe?

Benefits include low maintenance, reduced fuel costs and being able to fit in a parking spot reserved for a mobility scooter!

It’s probably about time that we refocus on smaller vehicles anyway. My last few Awesomely Weird Alibaba Electric Vehicles of the Week have been ballooning in size to the point where they’re getting a bit big for their britches.

Not only is it modestly powerful with a sprightly 2.8 kW electric motor (nearly four horsepower!), but it’s probably going to run for a week on a dollar of electricity.

The on board 60V 120Ah battery offers 7.2 kWh of capacity, or about the amount found in an entry level Zero electric motorcycle. That’s enough for a range of 140 km (87 miles), which is actually pretty impressive for a car the size of a washing machine.

If you’re doing more than 87 miles a day on a shift in one of these things, you deserve a promotion!

The top speed of 45 km/h (28 mph) means you could chase down even the fastest legal electric bikes on the road. Of course it’s the illegal ones that you’d really want to be after, and they’ll easily outrun you. But at least you’ll give them a giggle as you futilely floor it behind them.

If you do catch up to a perp (perhaps you should focus on the ones on foot), making the arrest might be a tricky. The first part should go fine, but transporting them downtown is going to be an intimate affair in a two seater coupe. It’s going to be shoulder to shoulder action with the bad guy (allegedly), so I hope you were nice during the arrest.

It may be an awkward drive back to the station, but at least you and the perp are going to have plenty of fun features to enjoy on the way. There’s a sun roof that opens for ventilation, sliding windows, and a built in stereo system!

On the mechanical side you get nice options like disc brakes for confident stops, suspension to avoid rattling your pea shooter out of its holster, LED lighting and even a pair of three-point seat belts. Safety first!

The price is a bit of a head scratcher, coming in at US $3,450. If that sounds cheap to you, then you must be new here. Welcome!

But here’s the thing: Most of my other fun Chinese electric vehicle finds are much more affordable. Hell, I found a whole electric RV for around this price.

Perhaps it’s the police light package and siren that increases the price. Perhaps it’s the upgraded parts to make this thing more powerful than the other Rascal scooters in its size class. Or maybe them’s the times and inflation is hitting everyone hard – even our boys in mall cop blue.

But if that’s the price to pay for the world’s smallest electric cop car, then I guess you’ll just have to pony up. Because at the end of the day, can you really call yourself a self-respecting police department if you don’t have at least one of these bad boys in your fleet?