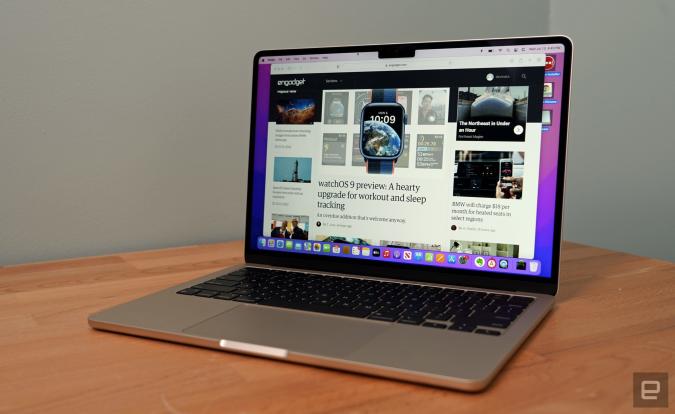 A quick PSA for anyone looking to pick up a new laptop ahead of the holidays: The base model of Apple’s newest MacBook Air is back down to $1,049 at various retailers, including Amazon and B&H. That matches the best price we’ve seen for what is currently the top pick in our guide to the best laptops. The notebook has hit this price a couple of times over the last month or so, but the discount still comes in $150 below Apple’s MSRP and roughly $85 off the average street price we’ve tracked online in recent months.

We gave the new MacBook Air a review score of 96 earlier this year, praising its thin and typically well-crafted design, vibrant 13.6-inch display, lengthy battery life, reliable keyboard and trackpad, and fast performance aided by Apple’s M2 system-on-a-chip. It’s a good ways pricier than the M1-based Air even with this discount, and you’ll have to get onboard with an iPhone-like display notch, but the extra cash gets you a sharper 1080p webcam (compared to a 720p unit before), much-improved speakers, slimmer display bezels and faster charging support with a dedicated MagSafe connector, alongside the slightly larger display. The M1 Air is still a fine laptop for everyday use if you’re looking to spend less — it’s currently available for $899 — but the M2 model is a clear upgrade.

The big caveat to note is specific to this entry-level configuration, which includes 8GB of memory and 256GB of SSD storage. On this model (as well as the base 13-inch MacBook Pro), Apple uses a single NAND chip to hold all 256GB of storage. Higher-capacity SKUs and even the M1 MacBook Air, meanwhile, are equipped with multiple flash storage chips they can use in parallel. This means the base version of the M2 Air is markedly slower in benchmarks when it comes to read and write speeds. If you’re looking to do more involved tasks like high-res media editing, it’s likely worth stepping up to 512GB version, which is currently $150 off its MSRP as well.

However, for streaming 4K video, web browsing across a bunch of Chrome tabs, word processing, email, lighter editing, and other more common tasks, the real-world differences with this configuration shouldn’t be hugely noticeable. The bigger issue might be whether 256GB is enough space for you in the first place. If it is, this deal should still be a good value.

In other Mac deals, the base 13-inch MacBook Pro is down to $1,149, which is within $50 of the lowest price we’ve seen. We have a harder time recommending that model over the M2 Air given its more dated design and similar storage limitations, but its battery lasts a little longer, and its built-in fan makes it a bit more performant for heavier tasks. If you can’t afford to step up to the more powerful 14- and 16-inch MacBook Pros, it may be worth considering.