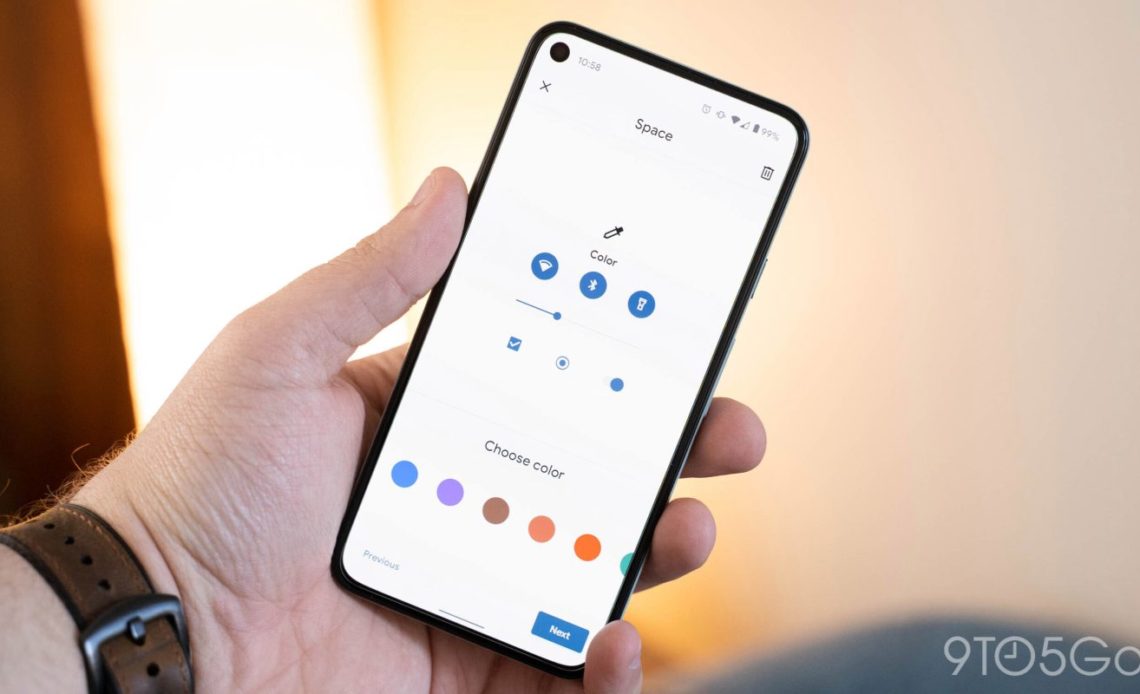 With Android 10, Google introduced a dedicated dark mode to reduce eye strain and simply look cooler. For Android 12, Google is working to bring a much deeper theming system, able to recolor supported apps.

On Google’s Pixel phones today, you have the ability to select one of a handful of colors to be used as an accent in a handful of places like the Quick Settings tiles and brightness slider. Beyond that, the main way to customize the colors of your phone is to switch between the light and dark theme.

According to information viewed by 9to5Google, Android 12 is working to bring a native theming system, which allows you to select a primary color and an accent color, and see those colors reflected throughout Android — where supported, more on that in a bit. The primary color chosen should even affect things like the background color of notifications and the Quick Settings area.

We’ve crafted some rough mockup images showing what it could look like to have a theme enabled. In the first mockup, I’ve borrowed the “Dim” blue shade from Twitter for Android, and combined it with the Pixel’s “Space” accent color. In the second mockup, I’ve used some colors from a green Material Design color palette.

The actual colors that you’ll have available to choose from will vary from brand to brand and possibly even model to model, as each phone maker will likely have their own sets of colors. Unfortunately, there doesn’t seem to be an option to craft your own unique color scheme or for one to be installable through the Play Store.

What really makes Android 12’s theming system special, however, is that your chosen primary and accent theme colors will also be accessible to developers of Android apps. That means, if their developers so choose, your favorite Android apps can better match your phone’s chosen theme.

By comparison, apps built for Android 10+ simply know whether you’re in light or dark mode and can adjust to whatever that app considers to be a dark theme. However, dark mode is very much a subjective issue, with many having different opinions on which scheme is best. Some prefer a dark gray or even dark blue base, while others contest that true “AMOLED black” is the only correct dark theme.

Instead of developers needing to design multiple color schemes to suit their customers, individuals can choose their own color scheme and have it potentially respected by apps. This level of deeper customization that can affect third-party apps, like Android 12 appears to be bringing, previously required a rooted device and Substratum, a community-built theming system.

One key difference between Android 12’s theming and Substratum is that Substratum forces individual apps into a particular appearance, while Android 12 merely offers your selected theme colors to apps as part of Android’s API.

Interestingly, your Android 12 theme colors should also be able to be chosen automatically based on your current wallpaper. When you change your wallpaper, Android should be able to seamlessly swap to new colors similar to your wallpaper’s color palette.

As Android 12 is still early in development, it’s still possible for Google to remove this new theming system ahead of launch later this year. We’ll likely learn more once we get our hands on Android 12 Developer Preview, which could happen as early as next month.