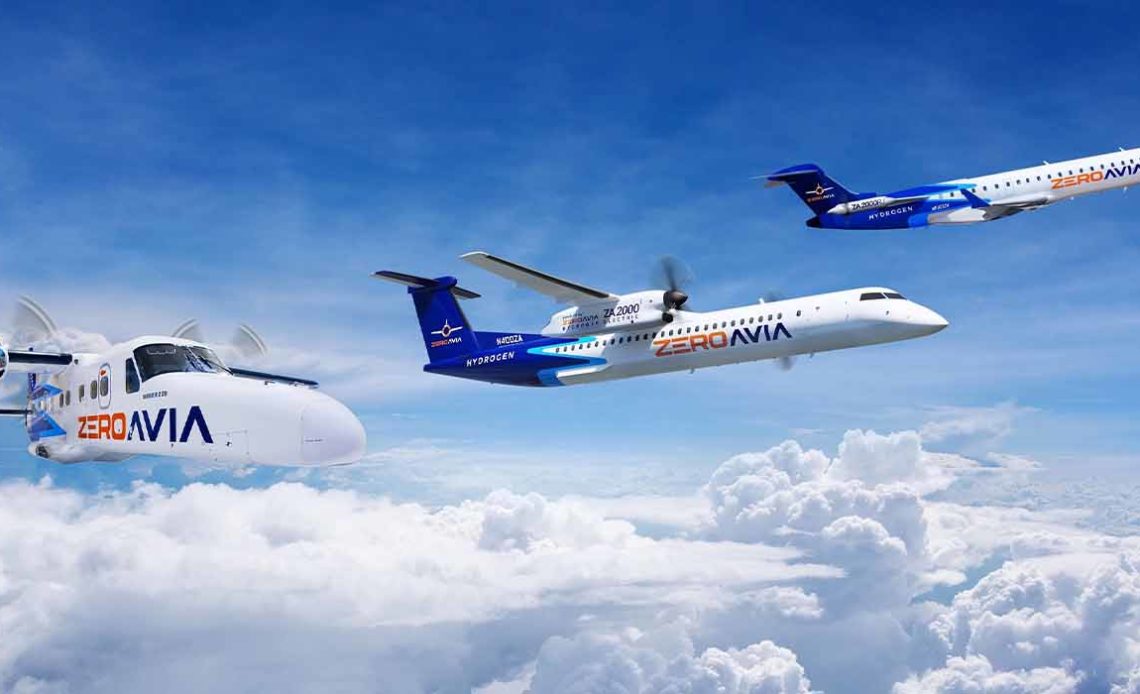 Hydrogen-electric plane developer ZeroAvia announced it has garnered an additional $30 million in funding from both new and returning investors, including International Airlines Group (IAG). The aviation company’s Series B funding round now totals $68 million, which will be used to get its forty to eighty seat planes into operation by 2026.

ZeroAvia is a zero-emission aviation company focused specifically on planes that utilize hydrogen-electric propulsion. The company currently operates in the US and UK and has experimental certificates for two prototype aircraft from both the CAA and FAA.

The company is working toward zero-emission commercial plane operations with its 600kW powertrain by 2024, targeting nine to nineteen seats and a range of 300 miles. It will be followed by a 2 to 5 mega-watt (MW) version targeting a 700 mile range. The latter is expected to cleanly power planes with forty to eighty seats and ZeroAvia hopes to deliver it in the next four years.

Last October, we shared news that Alaska Air Group, parent to Alaska Airlines, had invested in ZeroAvia to develop future hydrogen-electric planes. In December, Alaska was joined by United Airlines in an investment round totaling $35 million.

Since then, ZeroAvia has added several new investors and has secured additional funding from some airlines already onboard in support of a future filled with hydrogen-electric plane travel.

ZeroAvia announced the additional $30 million in funding in a press release today, sharing that IAG had increased its initial investment last year and is now joined by Barclays’ Sustainable Impact Capital and Saudi Arabia’s city of the future – NEOM.

By investing further, IAG brings along with it its arsenal of European airlines including Aer Lingus, British Airways, and Iberia. Combined with Alaska and United, ZeroAvia now has three major aviation companies (and their wallets) in its corner. ZeroAvia founder and CEO Val Miftakhov spoke about the investors:

Each of these star investors brings a unique perspective and strength to ZeroAvia’s wider team – from one of the world’s biggest airline groups, one of the largest and most historic banks, to the ambitious project to build the world’s first zero-carbon metropolis, as well as a pure-play impact investor. Our new investors are each looking at our journey through a different lens, but all energized by our mission to enable zero-emission flight using hydrogen-electric engines. This is a great recognition of ZeroAvia’s leadership in the space, fueled by real, tangible achievements.

According to the release, the additional investment funds will go toward ZeroAvia’s 2-5MW hydrogen-electric powertrain development program for planes. These larger aircraft will use liquid hydrogen fuel as opposed to gaseous for smaller aircraft, resulting in higher energy density and thus, increased range, and payload capacity.

Additionally, the funding will be used to build necessary infrastructure at airports to support live demonstrations of its Hydrogen Airport Refueling Ecosystem (HARE). ZeroAvia is currently ground testing its ZA600 powertrain at its R&D facility at Cotswold Airport in the UK. The testing is part of “Project HyFlyer II,” the name of ZeroAvia’s program to demonstrate hydrogen-electric flight in a Dornier 228 plane.