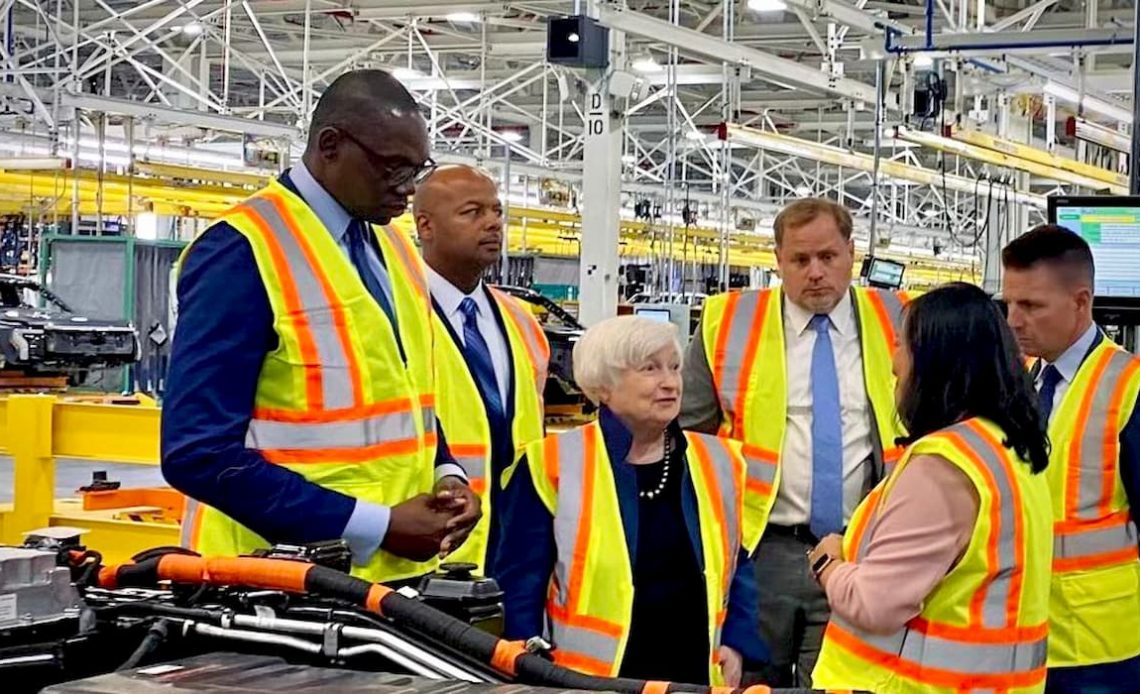 On Thursday, Janet Yellen, US treasury secretary, visited Ford’s Rouge EV plant in Detroit, Michigan, commenting on the newly passed climate initiatives and how they are already helping boost the American economy.

“Our plan has worked,” Janet Yellen declared during her visit to Ford’s Rouge EV facility, where the in-demand Ford F-150 Lightning is made.

Since Yellen was appointed treasury secretary in 2021, several major climate initiatives have been passed with her oversight. For example, the Inflation Reduction Act (IRA) and the CHIPS and Science Act are two of the most significant investments in clean energy and supporting technology in history.

The new bills come as the US economy hit the brakes as economic growth slowed throughout the first two quarters of 2022, which many see as a sign of a recession (though not official until the NBER declares it).

Much of the pressure results from soaring oil and gas prices (which the pandemic exposed as a vulnerability to the US economy), cutting into business and consumer budgets. In fact, Yellen said in March, as oil prices hovered around $110 per barrel and gas prices were climbing by the day:

The United States should have moved faster toward renewable energy sources and that, had we done so, the country would be in a better position to address climate change and national security.

Europe and the United States would be less exposed to the pressures that this conflict is putting on our energy markets if we had greater reliance on renewables.

Since then, US leaders have made it their mission to ween off fossil fuel reliance and build up the nation’s renewable energy sources.

Yellen traveled to Detroit to visit Ford’s EV plant and explain how these initiatives benefit them now and will continue to as the plan rolls out.

Yellen, one of the most influential people in the financial world (you know, managing the world’s largest economy), traveled to Detroit to address American workers.

The Bipartisan Infrastructure Law, the CHIPS Act, and the Inflation Reduction Act authorize among the most significant investments our country has ever made. I believe firmly that they will help us achieve stable, sustainable growth. And they will move us toward a fairer and more resilient economy.

The Treasury Secretary went on to explain:

We have experienced one of the quickest economic recoveries in our modern history.

Much of the administration’s focus is to fix the disrupted supply chains caused by the pandemic and strengthen the nation’s energy supply for a sustainable future.

For example, the CHIPS Act intends to speed up semiconductor production, a critical component in electric vehicles and renewable energy. Due to shortages and rising costs, many automakers have been slow with their EV rollout.

Altogether, these investments will, according to Yellen at Ford’s Detroit EV facility:

Support our energy security and insulate us from the type of fossil fuel-driven energy volatility that we’ve seen in the past year.

Ford has also been actively campaigning for climate change measures as it fully commits to an all-electric future. With this in mind, Ford’s VP of Sustainability revealed the CEO, Jim Farley, and the executive chair, Bill Ford, believe EVs could be the automaker’s revival.

If EVs and renewable energy are reviving Ford, can they revive the US economy? That’s what leaders are aiming for.

The US moving toward renewable energy and electric vehicles will be beneficial in the long run. With the new investments, the US is looking to strengthen the energy grid, lower costs to access sustainable transportation (electric vehicles, buses, school buses, delivery vans, etc.), and support the technology to make it happen.

You can already harness energy from the sun and use it to power your EV. But new investments could take this to the next level.

Companies like Enphase, with their IQ8 microinverter, have already developed ways to store solar energy and use it, even if the power goes off. In other words, you can use it off-grid, which, if this technology is applied on a mass level, could provide sustainable, lower-cost energy for everyone.

And then the US won’t need to rely on market-driven commodities like oil and gas that have prices driven by supply and demand. Instead, they will be able to regulate them.