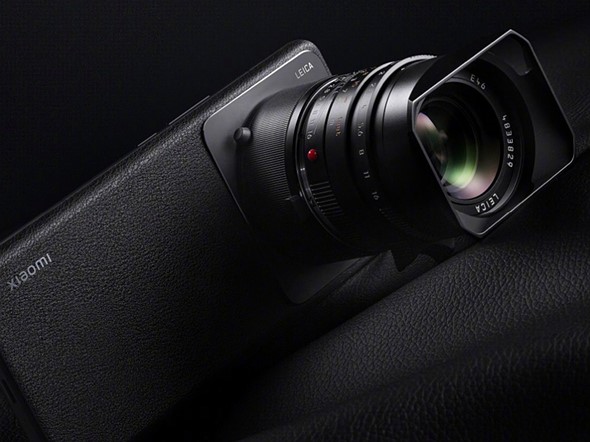 This past summer, Xiaomi introduced the 12S Ultra flagship smartphone. The phone offers many high-end features, including a 50.3MP Type 1 (13.1 x 8.9mm) Sony sensor and 23mm equivalent F1.9 main lens. The smartphone also includes Leica branding and Leica image and color-processing technology. When the 12S Ultra was announced, its distinct design was instantly noteworthy. The camera array, which includes smaller Sony sensors for ultra-wide (13mm) and telephoto (120mm) cameras, is circular and placed against a smooth, square surface. The circular camera array looks a bit like a lens mount. That’s no coincidence. Xiaomi has announced a new concept smartphone called the Xiaomi 12S Ultra Concept Phone that it developed internally alongside the 12S Ultra. The new concept product looks like the existing 12S Ultra, except you can see an image sensor behind protective glass in the center of the camera system.

The Leica M lens mount isn’t the only change. The 12S Ultra Concept Phone sports a second 50.3MP Type A (13.1 x 8.9mm) sensor. The second large image sensor sits in the middle of the camera array, pushing the regular main camera to the spot where the 48MP telephoto camera sits in the 12S Ultra. The second image sensor is housed beneath protective sapphire glass to keep dust and water out of the phone.

As Xiaomi shows, the lens doesn’t attach directly to the smartphone. Instead, it requires an adapter between the lens and the smartphone. The extra hardware adds a bit of bulk. When not in use, the 12S Ultra Concept is basically just like the regular 12S Ultra, save for the rearranged camera array.

Looking closer, what can users expect with an attached Leica M lens? Based on the size of the 50.3MP sensor, which is 13.1 x 8.9mm, the crop factor relative to full frame is 2.73. For example, the same Leica Summilux 35mm F1.4 ASPH. lens shown in the Xiaomi video above would deliver a field of view similar to that of a 95mm lens on a Leica M11.

The idea behind the 12S Ultra Concept isn’t new or unique. We’ve seen many add-on accessories for smartphones, such as those from Moment, ShiftCam and SmallRig. These accessories typically require a special adapter or phone case and work alongside a smartphone’s built-in optics. None of these solutions, including the 12S Ultra Concept’s approach, avoid some tradeoffs. In the case of Xiaomi’s concept phone, you must use expensive lenses and carry an adapter and lens with you. The adapter and lens attach with a simple twist and typical locking mechanism, but it’s still less convenient than just pulling your phone from your pocket and capturing a shot.

As for image quality, the 12S Ultra Concept differs considerably from add-on lenses because the phone is designed, from the ground up, to accept Leica M lenses. Aside from a layer of protective glass in front of the sensor, light travels directly through the lens and adapter to the large image sensor. The image quality should be among the best seen with a smartphone. Looking at the images below from Abi Go, head of product marketing for Xiaomi, it’s clear that the 12S Ultra Concept can capture impressive photos.

The Xiaomi 12S Ultra includes numerous impressive photography features, including 10-bit raw shooting and Leica’s impressive color science. With an attached M-mount lens, you can take advantage of these features, plus focus peaking, zebra lines, a live histogram, and more.