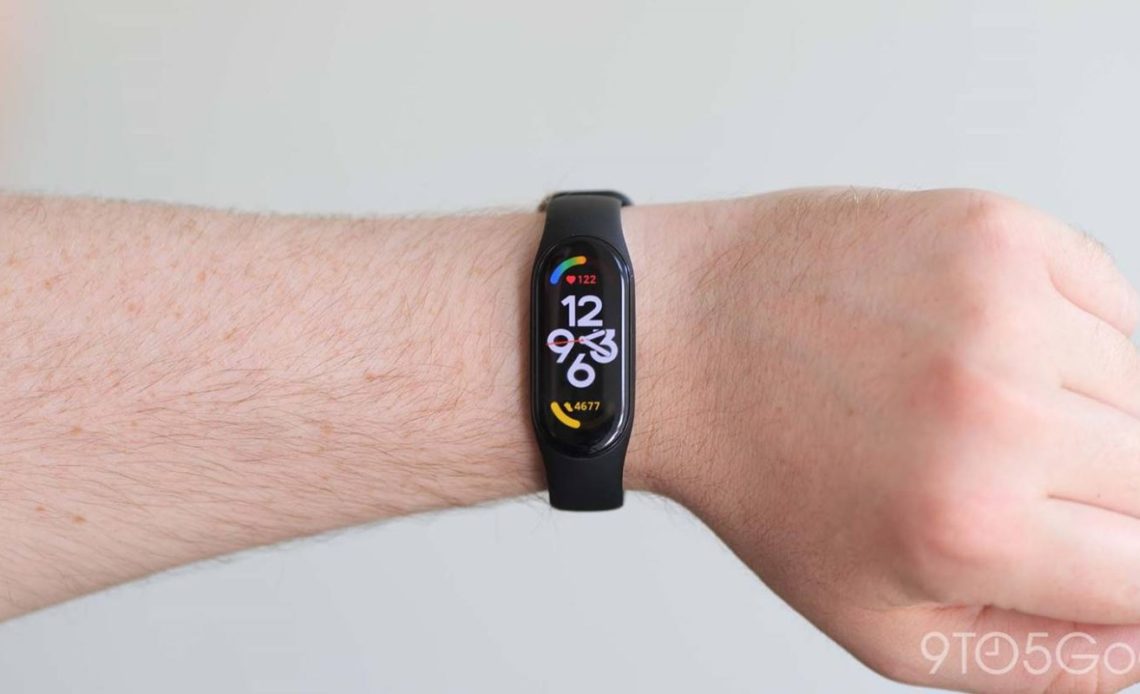 Few wearables beyond the Apple Watch have taken the market quite like the Xiaomi Mi Band series. A mixture of price, battery, form and function combine to ensure that the Mi Band 7 remains Xiaomi’s best budget product for yet another year.

While you might first feel that very little has changed. There are some very minor tweaks that evolve the Mi Band and make it the perfect everyday fitness tracking companion to all Android phones – or even an iPhone.

The clue is in the name of the Xiaomi Mi Band 7, it’s predominantly a silicone band with a small screen that can be detached and fixed to various straps, clips, and even a keychain from certain retailers. When most of our everyday tech has ballooned over the past few years, this is kind of refreshing in its simplicity.

Although the lack of fanfare with the design is commendable, it is hard to differentiate between the Mi Band 7 and its predecessors. Kudos to Xiaomi for not making changes for the sake of it, as this does mean that many existing accessories — such as replacement straps — should work just fine.

Think of the Xiaomi Mi Band 7 like an old pair of slippers, it’s familiar in all the right ways and that is a good thing given that it’s not trying to upset proceedings with fancy new hardware or major new functionality. Sadly there are no new watch face colors. You’ll need to switch out the silicone band to inject a bit of extra flair here.

That said, given that the Mi Band 7 is simply a thin strap with a sub-2-inch screen, I think it actually works best in the standard stealthy black design. Factor in that the Mi Band line starts at around $40-50 and it’s a forgivable design choice. Without NFC connectivity for wireless payments on global variants, this helps keep pricing low.

The fact that we’ve seen fitness bands develop from the early Fitbit-era strap with no display to full-color AMOLEDs shows just how far this style of wearable has evolved in such a short space of time. After introducing color to the line with the Xiaomi Mi Band 4 the display footprint has steadily increased millimeter by millimeter every year since. The 1.62-inch AMOLED display has a 326ppi, which is incredible given its size.

It’s a deceptively good display that is a lot smoother than I anticipated. I’m sore about the removal of the capacitive home button but gesture navigation and animations are fluid given that this is just a few steps up from a scientific calculator in the power stakes. Being able to skip tracks and read notifications feels more “analogue” than on your smartphone display — something that feels great even despite being essentially overloaded with info.

Being able to utilize the Always-on display feature for the first time was something I really had been looking forward to and after a recent software update, it hasn’t disappointed. There is certainly a battery life hit but it’s worth it as you gain at a glance time information without needing to activate or interact with the Mi Band 7. Each watch face has unique designs that take advantage of the feature too, which makes it even more fun to experiment with. I would stop short of calling it the killer feature but it’s certainly one of the best new additions and might be the reason that many people upgrade from an older model.

Xiaomi has added a number of new watch faces to take advantage of the larger display and the addition of Super Wallpapers from MIUI are an interesting but not necessarily great one. I found that something the animations would jump when activating the screen. While nice in principle, I simply stuck with the default watch face as it provided all of the information I wanted at a glance. Through the Zepp Life app, you can choose from a motley selection of designs that range from mechanical to abstract art.

I’ve found the 500 nit maximum brightness to be just enough for legibility in sunny environments but the domed, glossy display does hinder the Mi Band 7. However, it’s small enough that you can cover it with your hand and make out everything on-screen without too much issue.

At just 13.5g and with a compact size, you’ll barely notice you have anything attached to your wrist on a day-to-day basis. I’ve found the Mi Band 7 to be supremely comfortable thanks to the shape and size but the band fastens in a way that makes it secure too.

Because the display is flat and elongated, nothing protrudes out to inhibit your wrist movement. Heck, you could probably strap this to your ankle for a run and it wouldn’t be a bad experience.

Everything is waterproof to 5ATM, which means wearing the Mi Band 7 when in the shower – or even a dip in the pool is not even a concern. I would recommend removing and drying as you could get irritation because of the rubberized band.

There’s still no onboard GPS, which means you’ll need to take your phone with you for mapped runs or walks. I don’t personally have a huge problem with this, as those serious about fitness would likely prefer a dedicated tracker.

Xiaomi has slapped tracking for 120 workouts. Yes, 120. That’s a four-fold increase over the 30 modes offered on its predecessor. That’s not all as there are recovery mode tracking data options alongside training load data points.

I can’t speak too highly for the accuracy but you have plenty of options that dwarf a lot of full-fat smartwatches. Auto-workout tracking can be a little slow to kick in, which is something you might want to bear in mind. Being able to track things even from a rudimentary standpoint is always going to be more useful than simply guessing the metrics yourself.

Using the Zepp Life app (formerly MiFit) you can sync all of your fitness and health data to Google Fit. This data gets tagged within the Fit app, making it easier to see when you’ve actually worn your band or another wearable connected to your Google account.

To help ensure that you get the best battery life, I would suggest turning the continuous heart rate monitoring down to every 30 minutes at the most frequent. I left constant blood oxygen (SpO2) tracking on and after receiving the Mi Band 7, I charged once fully to 100%. In the 6 days since I started to wear it, I have not had to seek out the somewhat annoying charger.

Xiaomi claims that you can get up to 15 days of lifespan and with some tweaks that might be possible but you’ll lose out on some of the nice features that this slim wearable has to offer. For sleep tracking, this is where this kind of device will always beat out a large, bulky and power-hungry smartwatch.

When charging I found that removing the bulbous screen portion from the wristband was the only consistent way to ensure power draw. This is a little annoying but the charging method has not changed since the Mi Band 5.

The lack of NFC support outside of China is one of the few continual sore points for a tried-and-tested product that gets marginally better with each passing year. If you want a daily companion for basic fitness tracking with little to no bulk, there is simply nothing better.

However, if you have an older Mi Band, such as the Mi Band 5 or newer, there likely isn’t enough for you to consider picking up the new model. Personally, I think that the Mi Band 7 is the perfect alternative to a fully-fledged smartwatch such as the Galaxy Watch 4. If you just want basic health and workout tracking, a slim form factor, and excellent battery life then this is — still — the undisputed king of the fitness bands.

Where can I get the Xiaomi Mi Band 7?

While Xiaomi smartphones are quite difficult to buy in North American markets via reputable retail channels, accessories and wearables are easier to obtain. You can pick up the Mi Band 7 direct from Xiaomi’s official Amazon storefront for $69 shipped.