Weird Alibaba: Time to take this electric mobility scooter off some sweet jumps 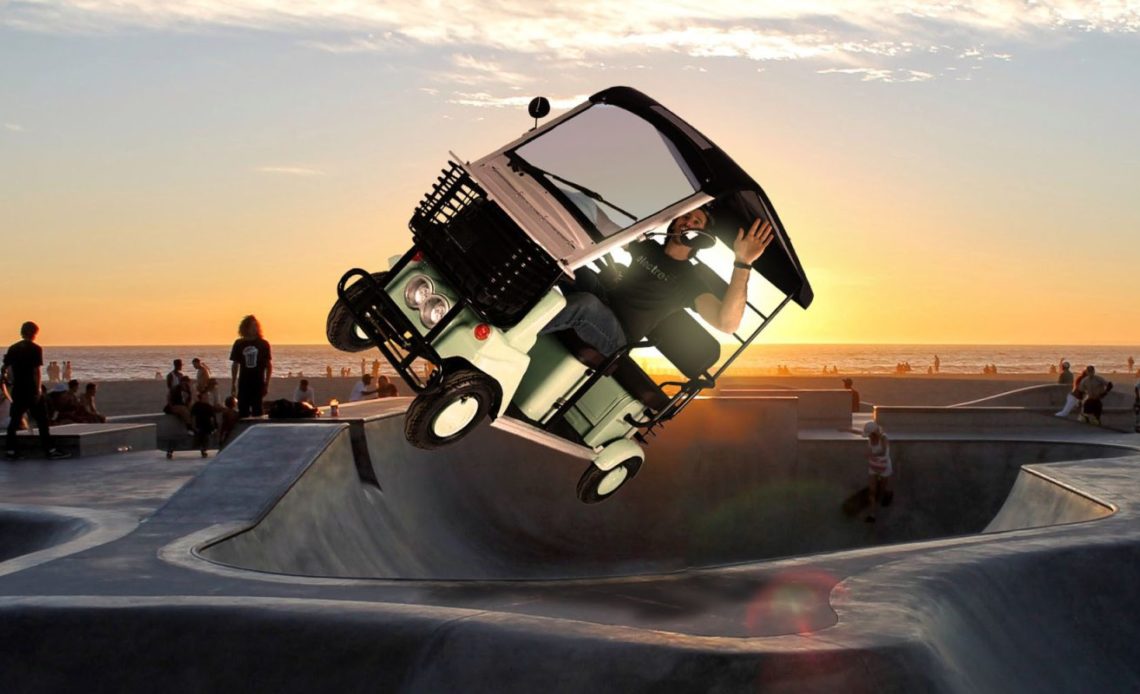 One of the best things about scouring Alibaba for awesomely weird electric vehicles is that many of them seemingly start from something rather normal. There’s nothing strange about an electric tour bus, until it comes shaped like a tiger. Stuffed animals are rather normal, until engineers added wheels, motors and batteries to make them rideable. And a mobility scooter for old folks is a pretty common sidewalk vehicle, until you add enough seats to make it into a party bus for old folks.

And that’s what we’ve got here, a stretch limo version of a Rascal scooter.

It’s just odd enough to make it into this week’s edition of the Awesomely Weird Alibaba Electric Vehicle of the Week.

Old people scooters are normally single-seater affairs, but this bad boy has a claimed “three to four” seats. The rear bench appears to be larger, but a couple frail grannies could probably squeeze in together up front.

The larger rear bench would be perfect for picking up their boys toys Milton and Edward for a night on the town. And by “night” I of course mean early evening. Can’t miss that Early Bird Special at the local eateries down in Del Boca Vista!

This old people party bus doesn’t slouch on the specs, either. You can get it outfitted with a range of motors with up to 1,000 watts of power. They say it can climb a 30º incline, which is almost certainly false, but I’m going to give it to them. Taking these honest Alibaba vendors at their word, those are some impressive specs.

I’ve got more expensive 28 mph electric bikes that have smaller motors than that!

There doesn’t appear to be any mention of a top speed for the mobility scooter, but that’s probably because it’s so fast they can’t legally print the specs. I’ll bet this bad boy is a blur when you put the pedal to the plastic.

That’s probably why they overspec’d the brakes, with front and rear disc brakes and regenerative braking.

I love all the accessories, too. There’s a storage basket up front, mirrors, a windshield wiper, optional rain curtains, a full light package and beautifully padded seats. It just needs a cane rack on back like a rifle holder and you’ll be set!

The batteries are 60V lead acids, which is some pretty old tech, but you could easily swap in some 12V lithium battery bricks to get some modern energy storage in this mobility scooter turned fun-mobile.

With 60V worth of lithium in this oversized mobility scooter and 1,000 watts worth of power beneath you, there could be some serious fun to be had.

Our graphics guy seems to think this geriatric go-kart belongs in the skate park and I don’t disagree.

I’d grind the edge of that bowl all day in this thing, making every Dorothy, Agnes and Harriet in the park weak in the knees. The designers obviously built it for extreme riding, which is why they put scooter tires on it instead of flat tires. They knew you’d be leaning this up on two wheels for hard cornering!

With that kind of stunt driving, you could be picking up blue hairs left and right in this thing. And fortunately there’d be enough seats for all of them too!

For a cool price of just $899, this hot-rodded mobility scooter limousine won’t break the bank either. That’s perfect for a pensioner’s fixed budget, and even leaves them with enough cash left over to really accessorize those rims.

It’s been a while since I made any big electric vehicle purchases on Alibaba, and I absolutely don’t need this mobility scooter. But somehow and for some reason I kind of want to get one. I’m sure that inquiring about the shipping cost will be a cold splash of water to the face and wake me out of that dream, but until then I can at least imagine being the coolest dude in Florida under 75.