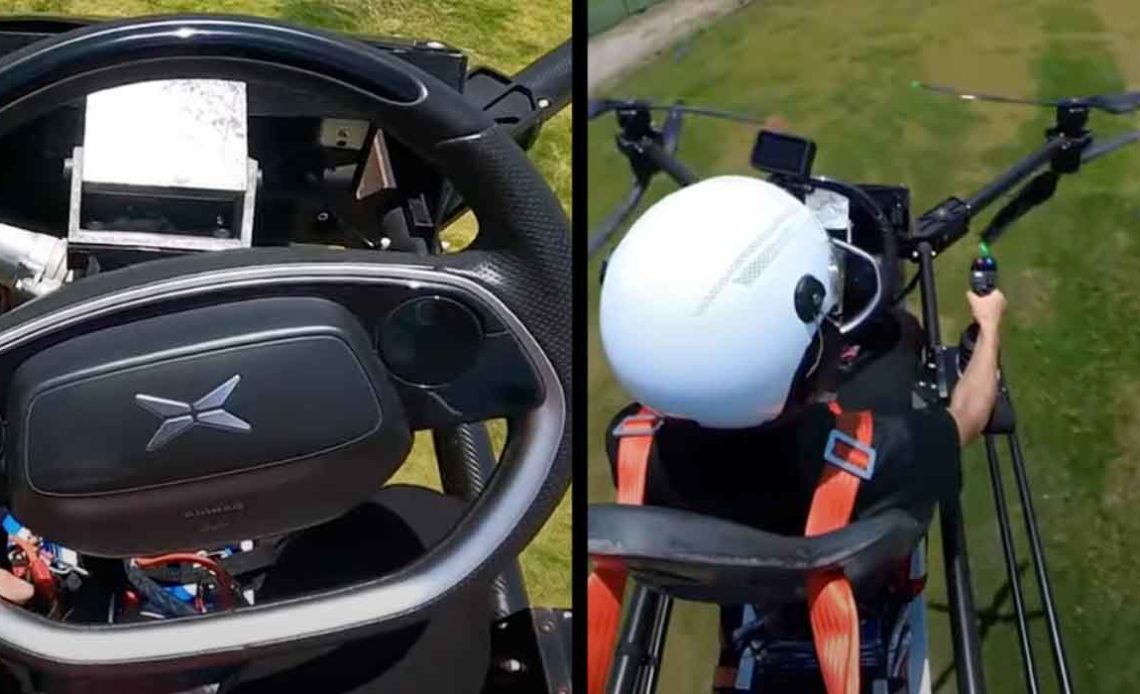 Urban air mobility (UAM) company HT Aero continues to make progress toward the “flying car” it has promised to deliver by 2024. XPeng Huitian (aka HT Aero) recently posted a video to Weibo demonstrating an eVTOL prototype taking off, flying around, and being maneuvered like a car. It has the XPeng Motors steering wheel and everything – check it out.

HT Aero is the rebranded name of XPeng Huitian, a majority-owned entity of XPeng Inc. and founder He Xiaopeng. Since its foundation in 2013, HT Aero has conducted over 15,000 safely manned flights with the goal of combining automotive and aerospace technologies to develop safe, domestic electric flying vehicles at scale.

This began with the T1 eVTOL (electric vertical takeoff and landing) vehicle in 2019, followed by the X1 in 2020, which appears to be the model demonstrated in the video below, given that it doesn’t have a roof like the X2.

Speaking of which, the X2 is the company’s fifth-generation “flying car.” Although it doesn’t have wheels, HT Aero refers to the X2 as a flying car, because it shares much of the same design DNA as the XPeng P7 sedan.

XPeng’s HT Aero has already shared video footage testing the X2 in extreme environments and high altitudes as it works toward delivering its sixth-generation model. This actual flying car was unveiled this past October and is scheduled to arrive in 2024 and only cost about $155,000.

As you’ll see in the latest video from XPeng below, HT Aero still has a long way to go before it starts delivering anything close to resembling a flying car.

That being said, the footage does show promising progress in electrified flight and HT Aero is taking a unique approach to the design that is definitely more car-like. The steering wheel is a dead giveaway.

The latest flying car video was posted to the XPeng Huitian/HT Aero Weibo page today, along with the following caption:

Many students are curious about how to operate a flying car. Huitian students are also actively exploring and experimenting. We hope that the final driving mode is as simple and easy to learn as a car. We are constantly experimenting with the ‘flying car control logic’ that integrates land and air to verify its feasibility; at the same time, we are also exploring other possible control methods.

As you’ll see below, the eVTOL prototype is equipped with an XPeng Motors branded steering wheel in addition to a throttle on the right. It looks like the pilot uses the throttle to control movement flying up, down, forward, and reverse, then uses the traditional car steering to move left and right.

Perhaps this is the setup we can expect to see in the 2024 model promised? Where do you put that throttle joystick when you’re in normal drive mode? XPeng is clearly working on it.

We had trouble pulling this video from Weibo because we’re in a different country, but shoutout to CnEVPost for putting it on YouTube. Have a look and let us know what you think.