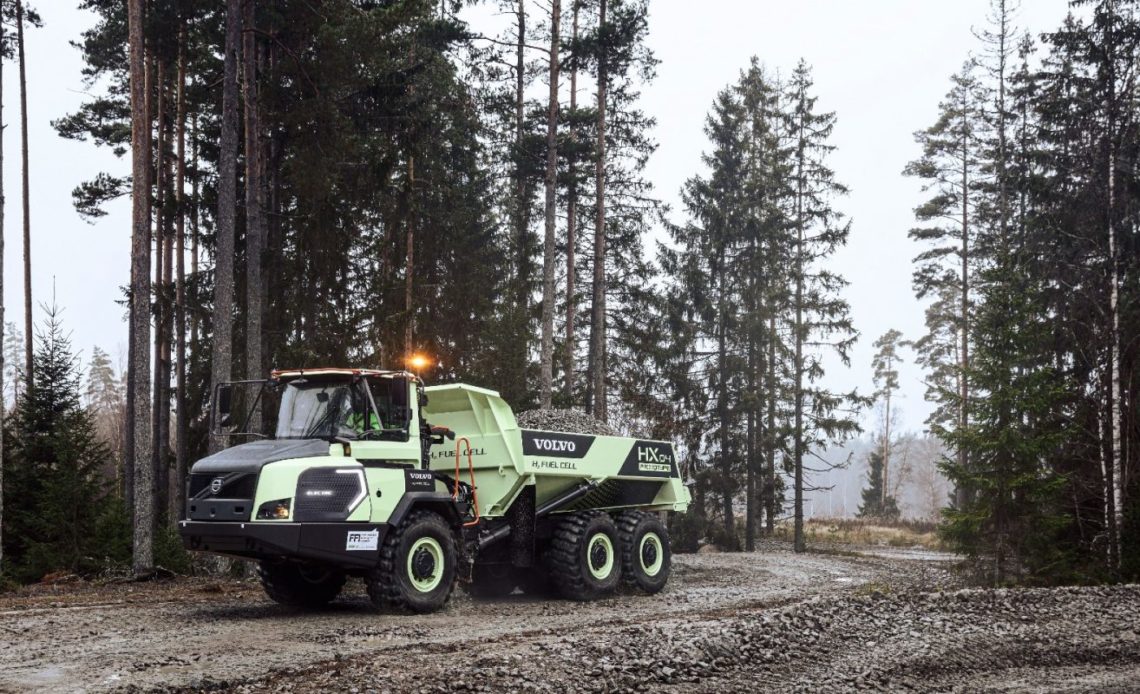 Articulated haulers are very large, heavy-duty dump trucks used to carry bulky loads over rough terrain and occasionally on public roads. They feature a swivel joint, so they are able to move – or articulate – to keep the cab stable.

Volvo’s HX04 articulated hauler, which is the result of a research project that started in 2018, is charged with 12 kg of hydrogen in around 7.5 minutes, which enables it to operate for around four hours.

Fuel cells work by combining hydrogen with oxygen. The resulting chemical reaction produces electricity that powers the machine. Fuels cells only emit water vapor and can also produce heat that can be used for heating the cab.

In order for hydrogen to be “green” – and it must be green, or there’s no point – the electrolyzer used to make the hydrogen must be powered by wind or solar, not by fossil fuels. (Learn more about hydrogen production here.)

In principle, a fuel cell works much like a battery except that it generates its own electricity from the hydrogen onboard as needed rather than being charged from an external source. Vehicles with fuel cell electric powertrains have an uptime, range, and fueling time similar to that of combustion engine powered vehicles.

Hydrogen charging infrastructure is still in development. Shell has installed a hydrogen refueling station at the Volvo CE test track in Braås, Sweden, where Volvo has manufactured articulated haulers since 1966. The development of the six-wheel prototype was carried out there, and the fuel-cell test lab is at the Technology Center in Eskilstuna, Sweden.

Volvo asserts that commercialization of hydrogen-powered machines is expected to start in 2025.

Being inventors of the world’s first articulated hauler more than 55 years ago, we are happy and proud to again drive change with this fuel cell hauler concept.

While an early prototype, this innovation will give valuable insights into the opportunities of hydrogen in the energy transformation alongside battery-electric solutions. We believe that by exploring multiple technologies and working in partnership, we can create the best path forward to decarbonize the construction industry.

Volvo Construction Equipment has a value-chain net-zero emissions target of 2040. It’s already rolling out electric construction equipment in Europe and the United States.

Read more: Volvo showcases its electric construction equipment ahead of full rollout in 2022