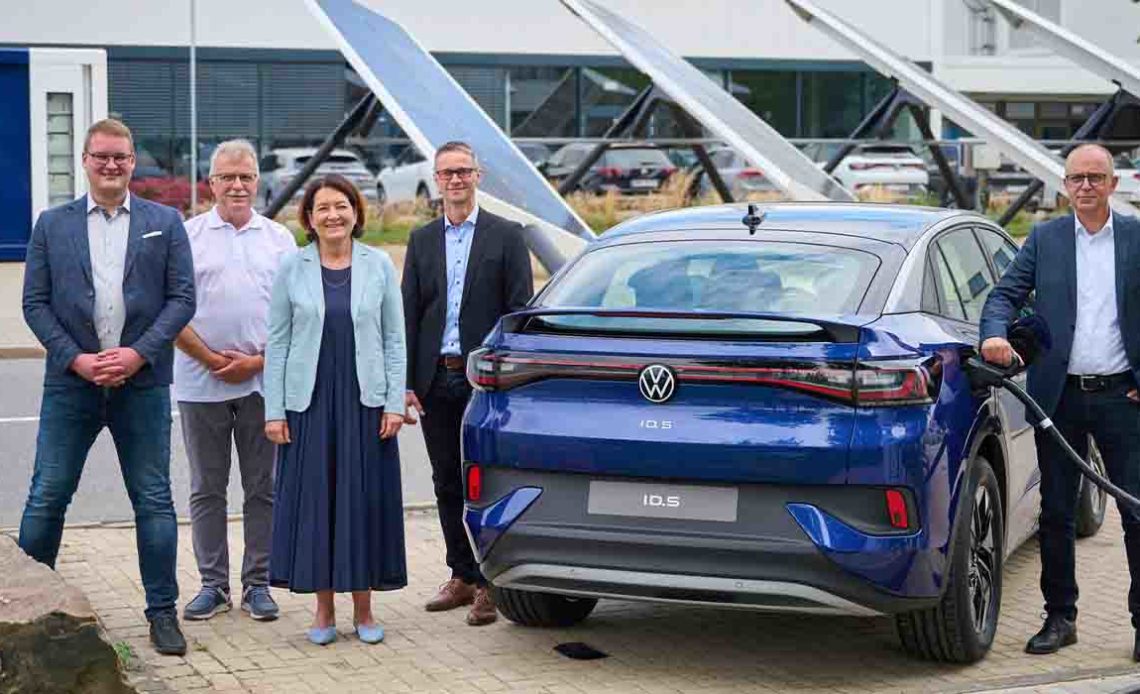 Volkswagen’s ACCELERATE strategy is to further EV adoption and become net-zero climate-neutral by 2050 at the latest. This strategy includes introducing a new BEV model each year through 2026 and includes investments in other EV-adjacent technologies, such as charging infrastructure.

For example, VW Group is developing flexible charging stations in China through a joint venture with DU-POWER as well as fast chargers equipped with battery storage technology through E.ON.This past April, Volkswagen Group announced a partnership with BP to deploy over 8,000 EV chargers across the EU and UK.

Now, Volkswagen is piloting more sustainable charging technology on its own turf using storage containers filled with repurposed EV batteries. If this concept sounds familiar, it should.

Volkswagen tries its own use of EV batteries for charging

According to a press release from Volkswagen Group, the automaker is commissioning a fast-charging park in Saxony, Germany, that will pilot power storage containers equipped with EV batteries formerly used in preproduction model ID.3 and ID.4 EVs.

These PSCs house ninety-six EV cell modules that combine for a net capacity of 570 kWh, offering portable and more sustainable charging infrastructure in the future. According to VW, AW Automotive and Automotive Research also helped develop the project.

Volkswagen believes these automotive power banks can eventually enable high-power chargers (HPCs) in areas where the available max AC charging is only 11 kW, like in residential areas, for example. Managing director for finance and controlling at Volkswagen Sachsen, Karen Kutzner, elaborated:

Reusing batteries is important for the future and it’s closely linked to the acceleration in the trend toward electric mobility. With the power storage container, Volkswagen Sachsen is demonstrating a practical, cost-effective and useful case to enable cell modules at the end of their service lives to have a second life. This automotive power bank could be used wherever the capacity of the grid connection is too low but there is demand for powerful charging infrastructure. Innovative ideas like this could provide renewed impetus for the critical buildup of fast-charging infrastructure.

While Volkswagen Sachsen’s new PSCs are exciting for more portable and sustainable charging, the automaker gives credit to Audi, who already successfully demonstrated the technology using its own repurposed EV batteries last year. The VW Group subsidiary actually took the containers a step further, designing a visitors lounge on top to create its Charging Hub in Nuremberg.

Perhaps VW CEO Herbert Deiss was impressed enough during his visit to the Audi Charging Hub that he instructed Volkswagen Sachsen to adopt a similar strategy using ID.4 EV batteries. Audi’s initial pilot of the hub was such a success that the automaker is now working to expand the model to other cities in Germany.

The new Volkswagen charging park currently consists of four charging stations, each with an output of 150 kW. They can also be divided into two outputs of 75 kW, meaning that up to eight EVs can charge simultaneously. Three additional fast-charging parks are expected to be in operation by the end of the year.