Whether you like it or not, 5G is coming, and a handful of brands are already offering compatible devices in select markets. The latest to jump on the 5G bandwagon is Vivo with its NEX 3 5G, which is a flagship smartphone that doesn't look too bad. It comes with Qualcomm's top-tier Snapdragon 855+ chipset, along with a "Waterfall FullView" curved display, a triple set of rear cameras (including a 64-megapixel one), a faster pop-up front camera and a few other bonuses. The Chinese company is already in talks to bring this device to Europe, and if all goes well, there's a small chance that this may even land in the US.

There's hardly any surprise with the NEX 3 5G's appearance, as Vivo had already been showing it off since late August. The idea behind that 6.89-inch "Waterfall FullView Display" is to push the screen-to-body ratio up to 99.6 percent, thus further reducing the bezel. Indeed, if you're facing the screen directly, the bezel on the left and right are pretty much gone, as the AMOLED panel folds around at almost 90 degrees. While Vivo is the first to implement this "waterfall" screen on a retail device, its sister company Oppo had already revealed this then-upcoming technology back in July.

This curved display also allows for a bigger screen in a narrower body, and Vivo took further advantage by offering "Side Ambient Light": When the phone is placed upside-down, the two sides show various light patterns to go with notifications and music. If that's too much for you, don't worry: You can turn it off.

While this Samsung-made panel only packs a 2,256 x 1,080 resolution plus the usual 60Hz refresh rate, it makes up for it with an impressive 800-nit brightness, HDR10 compatibility and 100-percent coverage for both P3 and sRGB gamut. Night owls such as myself will also appreciate the TÜV-certified blue light filter to reduce eye-strain at night. This is all protected by Schott's Xensation Up glass, which Vivo claims is the best option in terms of durability. 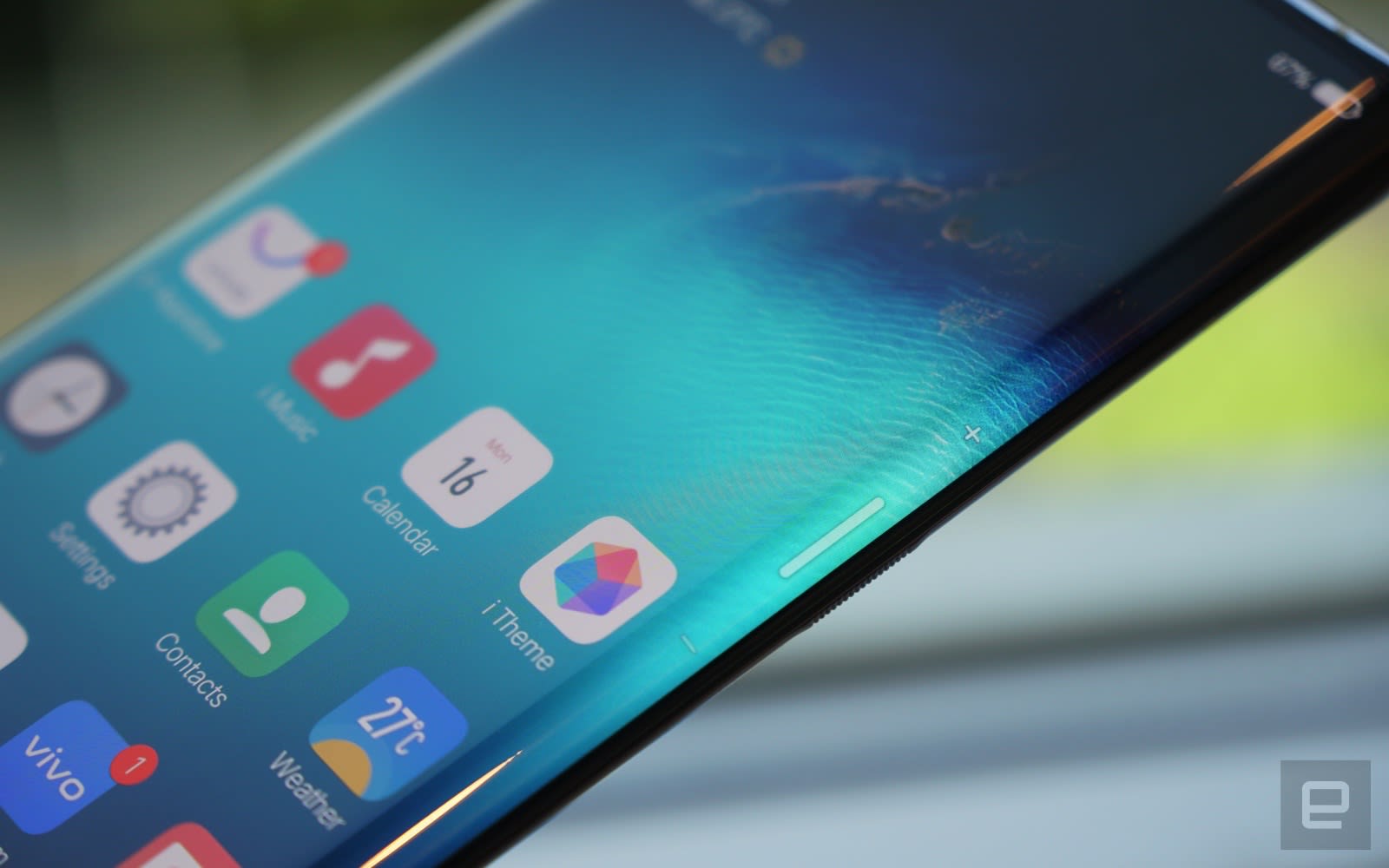 If you were expecting Vivo to port its full-screen fingerprint recognition from its APEX 2019 concept phone to the NEX 3, sorry, it's not quite ready yet. That said, the under-screen fingerprint reader here does benefit from a 25-percent increase in scanning area, and it's also apparently faster than before.

On a similar note, Vivo only took a partial approach to the APEX's invisible buttons for the NEX 3 -- you'll find them on the metallic frame instead of a glass body. These power and volume keys are enabled by a total of seven pressure sensors. Strangely, though, there's also a tiny physical power button at the top (near the 3.5mm headphone jack), which makes us wonder whether Vivo is actually confident with its invisible button tech. 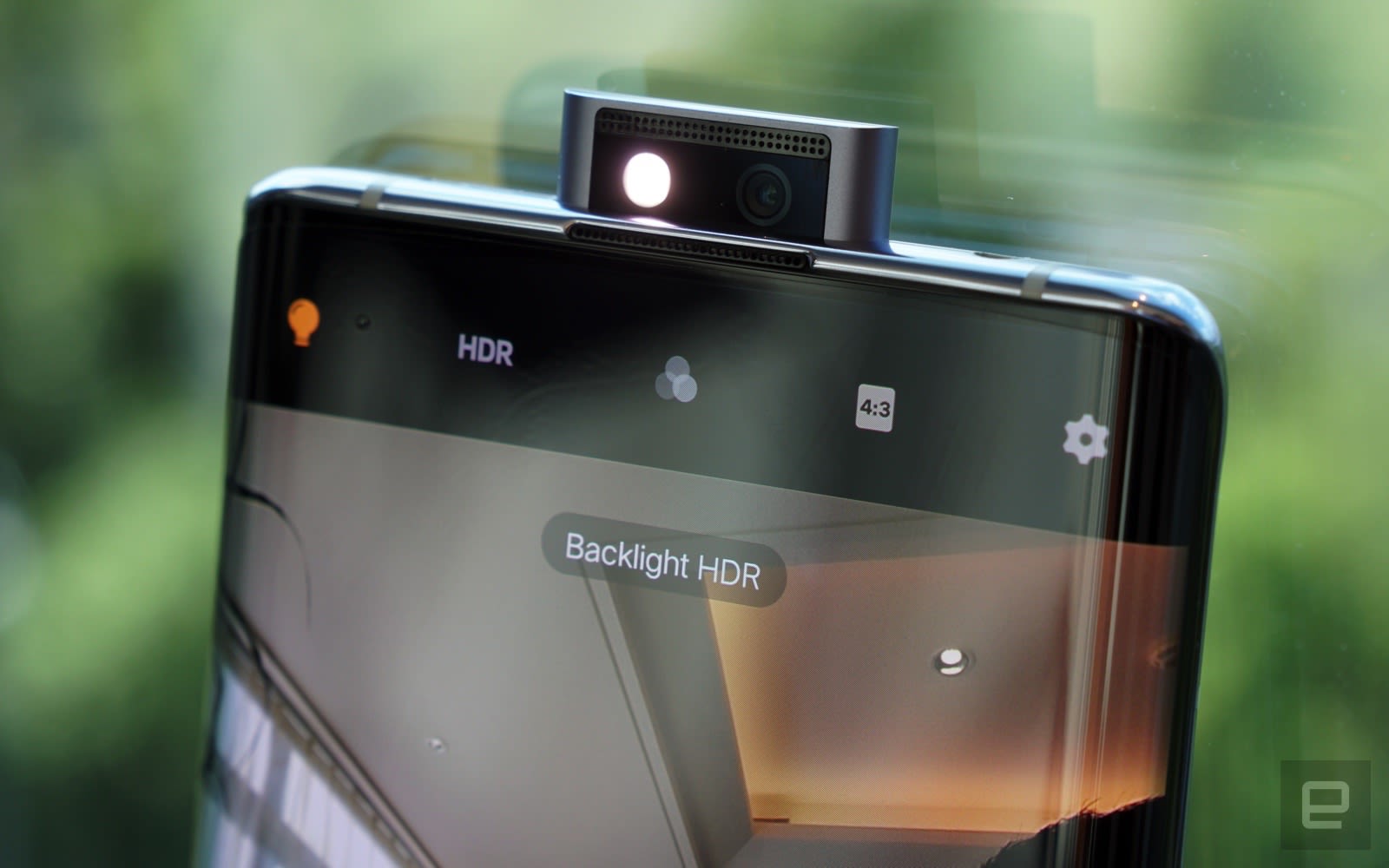 Like the original NEX, the NEX 3 comes with a pop-up front camera to avoid the notch. What's new is the 16-megapixel sensor, which is now accompanied by an LED soft light, hence the wider pop-up module. It's also been moved to the center for aesthetic reasons, and according to Vivo, the camera now pops up in just 0.65 seconds instead of taking an entire second. As with pretty much all phones from the Far East these days, there are various beautification features to go with this selfie shooter.

Flip to the glass back, and you'll find a "Lunar Ring Camera System" which packs three cameras. The main 64-megapixel, f/2.09 camera uses the same 1/1.71-inch Samsung GW1 sensor as the Redmi Note 8 Pro, and while it outputs optimized 16-megapixel photos by default, you can toggle the 64-megapixel mode to squeeze in all the details. Vivo also threw in "Hyper-HDR" which offers an impressive 12.3eV range, along with a 7.65eV range for the new "Portrait Master" mode.

The remaining shooters include an ultra-wide camera (f/2.2, 120 degrees) and a 2x telephoto camera (f/2.48), both of 13-megapixel resolution. Vivo added that the ultra-wide camera here does macro shots at down to just 2.5cm, which is apparently an industry-first. Oddly, Vivo chose not to equip any of these cameras with optical image stabilization, so it'll be interesting to see how these fare against the competition. 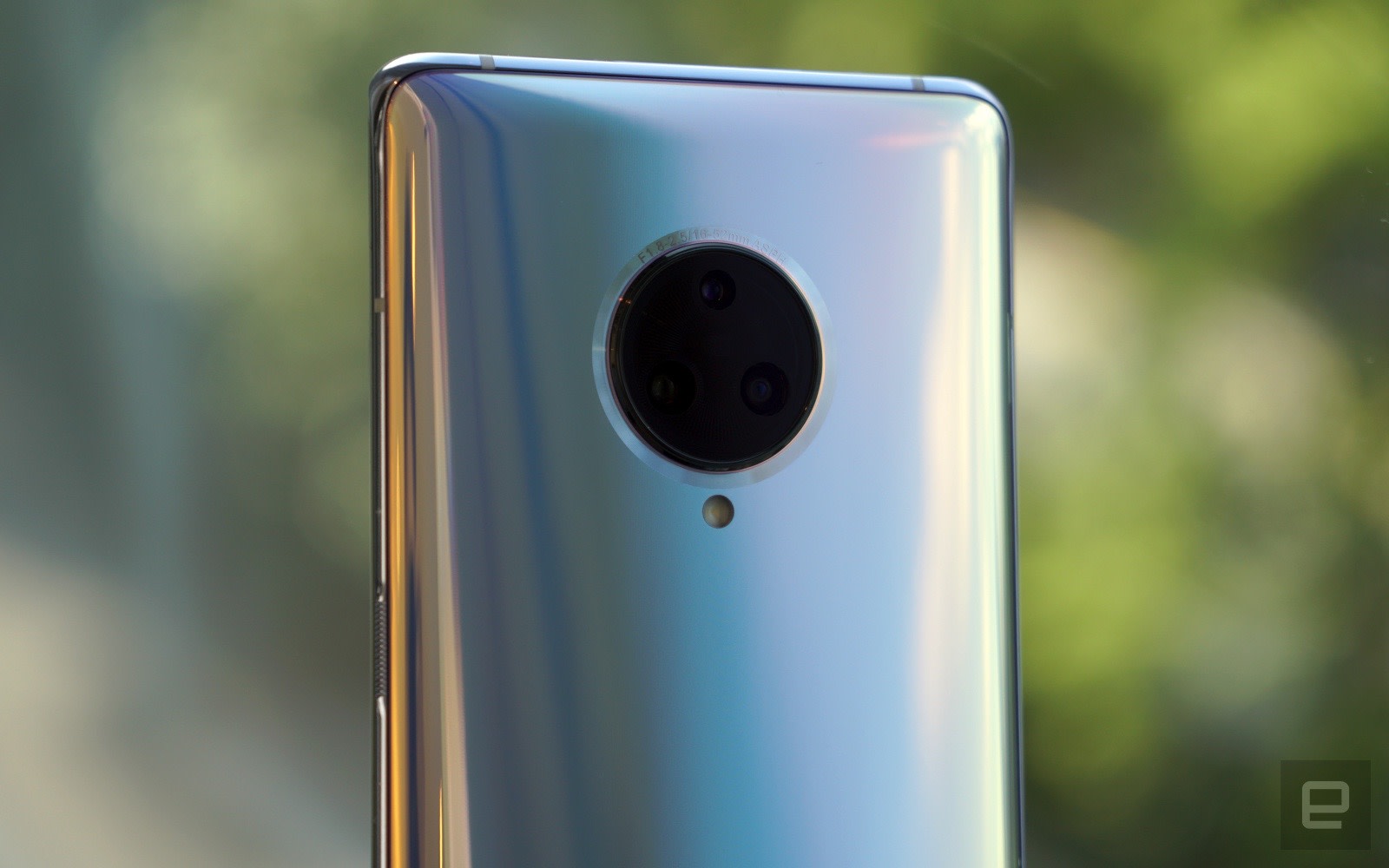 For the sake of stable 5G connectivity, Vivo worked in a "5G-6 antenna" to apparently allow for uninterrupted transmission no matter which way you hold the NEX 3. This is obviously more ideal than the usual 4x4 MIMO antennas for 4G. The company added that this design is based on its thorough study on how its users hold their smartphones. Alas, while Vivo was one of the first phone makers to demo the more advanced mmWave 5G connectivity, the NEX 3 will only utilize sub-6GHz radio. But then again, it's still early days for 5G networks, anyway.

Much like the company's gaming-centric iQOO, the NEX 3 features Vivo's 44W "Super FlashCharge" tech (11V/4A; single cell), and this takes just 30 minutes to reach around 67-percent charge, or 64 minutes to fully charge the 4,500mAh battery. In terms of percentage, that's about the same performance as the OnePlus 7 Pro with its 30W Warp Charge tech but smaller 4,000mAh dual-cell battery. Interestingly, Samsung's Galaxy Note 10 Plus shares a similar percentage at the 30-minute mark using the bundled 25W charger, though it does have a slightly smaller 4,300mAh battery.

Other features include a DAC audio chip, a dual-SIM tray and NFC. There's 256GB of speedy UFS 3.0 storage, along with either 8GB or 12GB of RAM to keep Android 9 running smoothly. 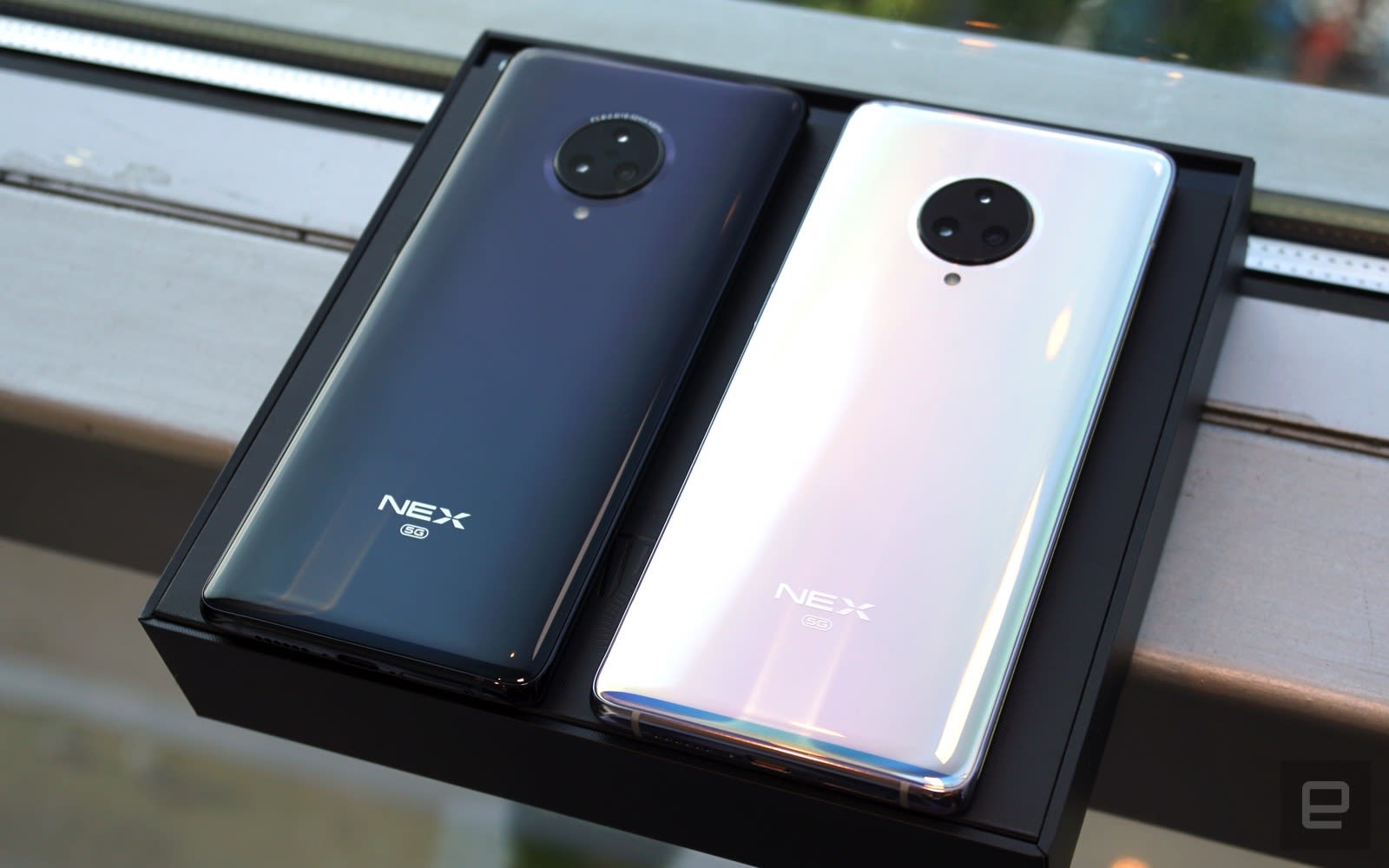 At the time of writing, Vivo had yet to reveal an international launch date and pricing for the NEX 3 5G, but we do know that it's already in talks with carriers and vendors in Europe. The company told Engadget that it's also keen to find a partner in the US, so that it can bring the same device over when the time is right.

For now, though, we'd advise our US-based readers against importing the NEX 3 if you're after its 5G connectivity, as the spec sheet suggests that only Sprint shares the same 5G band, and there's no guarantee that the phone will be fully compatible with the network. That said, if you don't mind sticking to 4G, you're good to go.

9to5Rewards: Still time to win the 2020 iPhone SE from Incipio