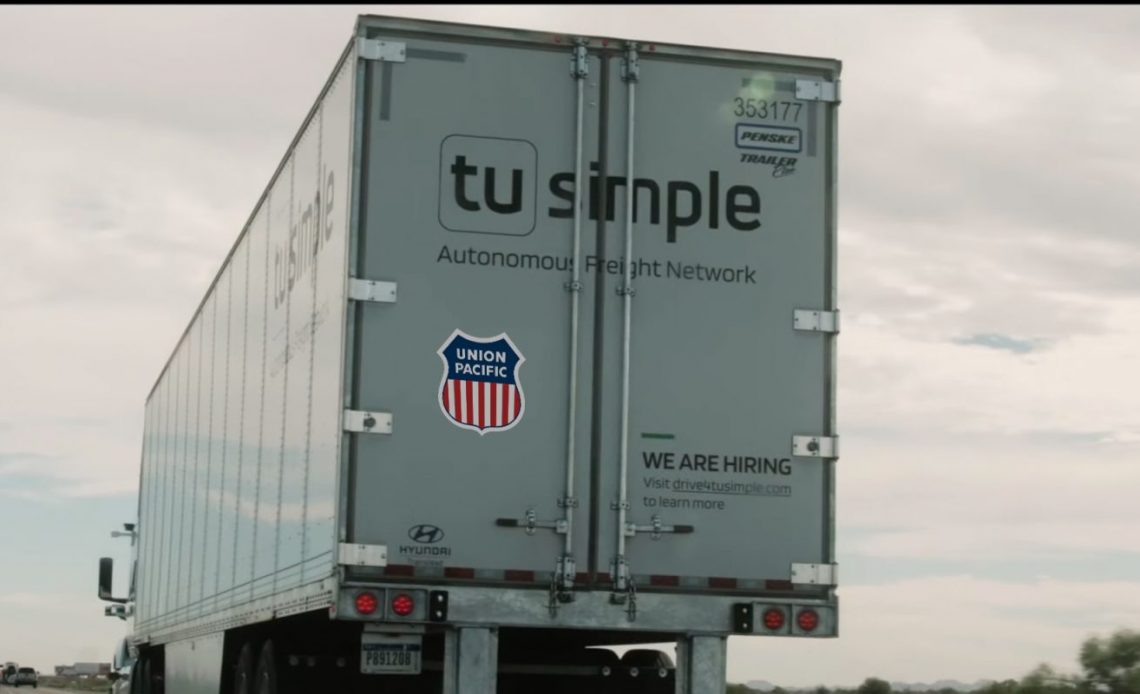 Autonomous driving technology company TuSimple announced that North American railroad Union Pacific has signed on as its first customer for autonomous freight trucking services. UP will become the first to utilize TuSimple’s technology, which will travel between an Arizona rail yard to first and last deliveries without a driver present in the vehicle and without remote human intervention.

TuSimple ($TSP) develops commercial-ready, fully autonomous (SAE Level 4) driving technology designed specifically for long-haul heavy-duty trucks. It was founded in San Diego in 2015, where it is currently headquartered, but it also operates in Arizona, Texas, Europe, and China.

The company’s “Driver Out” pilot program reached this pivotal moment this past December after 1.5 years developing an L4 autonomous semi-truck with the level of redundancy and reliability required to ensure its trucks can safely operate on public roads without a driver.

On December 22, a semi-truck rigged with TuSimple’s autonomous technology traveled over 80 miles on surface streets and highways from Tucson, Arizona, to a distribution center in the Phoenix metro area.

Since then, TuSimple has shared that it has completed six more driverless rides totaling 550 cumulative miles on public roads without a driver present. Previously, TuSimple has stated that its “Driver Out” program is the first vital step in scaling its autonomous trucking operations on the TuSimple Autonomous Freight Network (AFN).

The autonomous trucking company announced its new freight customer in a recent press release, outlining some of the terms of the new partnership.

Partnering with TuSimple allows us to extend our operations beyond our rail hubs and serve our customers faster and more efficiently. This groundbreaking autonomous driving technology and our partnership provide us a significant opportunity to scale the technology in our network, proactively reducing global supply chain congestion.

UP’s venture into autonomous freight technologies is one of several recent collaborations transporting the 160 year-old railroad into a cleaner, safer future. Last week, we covered news that Union Pacific had purchased ten battery-electric locomotives from Wabtec, followed by the purchase of another ten from Caterpillar Inc’s Progress Rail.

Those zero-emission locomotives will operate in UP rail yards in California and Nebraska to start, but could eventually be providing freight to TuSimple’s autonomous trucks in Arizona as well.

Looking ahead, TuSimple will continue to develop its autonomous technology through its “Driver Out” program, working to incorporate daytime freight runs and new routes. It plans to begin autonomous freight routes for Union Pacific this spring.