This Steam Deck dock has a thermoelectric cooler 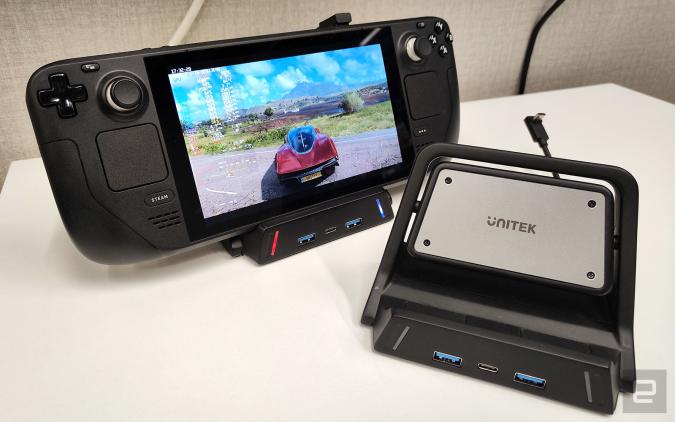 If you’re lucky enough to track down a Steam Deck, chances are you’ve already experienced the sweaty palm syndrome with this handheld console — just as our very own Jess Conditt did in her review. Worse yet, the machine is prone to throttling or even crashing due to overheating, to the point where modders came up with their own creative solutions. For the rest of us who don’t want to void the warranty, though, Hong Kong-based Unitek is now offering the Cooler Dock Pro for Steam Deck. This is essentially Valve’s official dock boosted with a thermoelectric cooler — like the one that comes with the ROG Phone 6D Ultimate — on the back, if you don’t mind paying the extra $30.

Much like the official dock, Unitek’s version cushions your Steam Deck — or any portable device, for that matter — with a strip of soft silicone, and there’s a short USB-C cable dangling from the back for connecting to the console. The thermoelectric cooler, RGB-lit fan and metallic contact plate are all housed within a hinged module, which allows for minor tilt angle adjustment while supporting the Steam Deck.

The Cooler Dock Pro comes with a set of ports similar to those on Valve’s dock, but with some placed at the front instead — the latter include two USB-A and one USB-C (up to 10Gbps), accompanied with two RGB lights. On the back, you get a USB-C PD socket (up to 100W passthrough), HDMI 2.1 and DisplayPort 1.4 and Gigabit LAN. It’s worth noting that this dock supports Multi-Stream Transport i.e. daisy-chaining multiple monitors in the console’s Linux desktop mode. If you’re using just one video output, you’ll get up to 8K at 60Hz or 4K at 120Hz; but if you’re using both ports, then it’s either dual 4K at 60Hz, or 8K at 30Hz on one and 1080p at 60Hz on the other.

Unitek has added one extra USB-C port on the left, which is dedicated to the cooler module. If you want to use just the cooling function while on the go i.e. no displays nor accessories connected to the dock, you can simply plug a power bank into that 10W USB-C socket.

Unitek claims that while running Apex Legends, the Steam Deck’s average surface temperature was around 46°C (114.8°F), but when used with the Cooling Dock Pro, this figure dropped down to 34.5°C (94.1°F) — falling within the recommended ambient temperature range. For a more extreme test, we ran Forza Horizon 5 on ultra graphics settings, in which case the Steam Deck would normally fail to start a race, but it managed to last for around six minutes on the Cooling Dock Pro. The company added that when lowered to high graphics settings, the game would crash after around 45 minutes of gameplay, but with its dock, it kept running even after an hour. Of course, your mileage may vary from one game to another, but it’s more about prolonging your Steam Deck’s lifespan.

The $119 Unitek Cooling Dock Pro is now available for pre-order, with shipments starting from around mid-December. There’s also a cheaper $89 Cooling Dock for those who only need an HDMI 2.0 port (capped at 4K at 60Hz), though it won’t be shipping until Q1 2023. It should be noted that there’s no power supply included with either model (but they do come with a 2-meter 100W USB-C cable), while Valve’s $89 official dock includes a 45W brick. Chances are you may already have a compatible power supply; Unitek recommends that you’ll need 60W or above to get the most out of the Cooler Dock Pro.