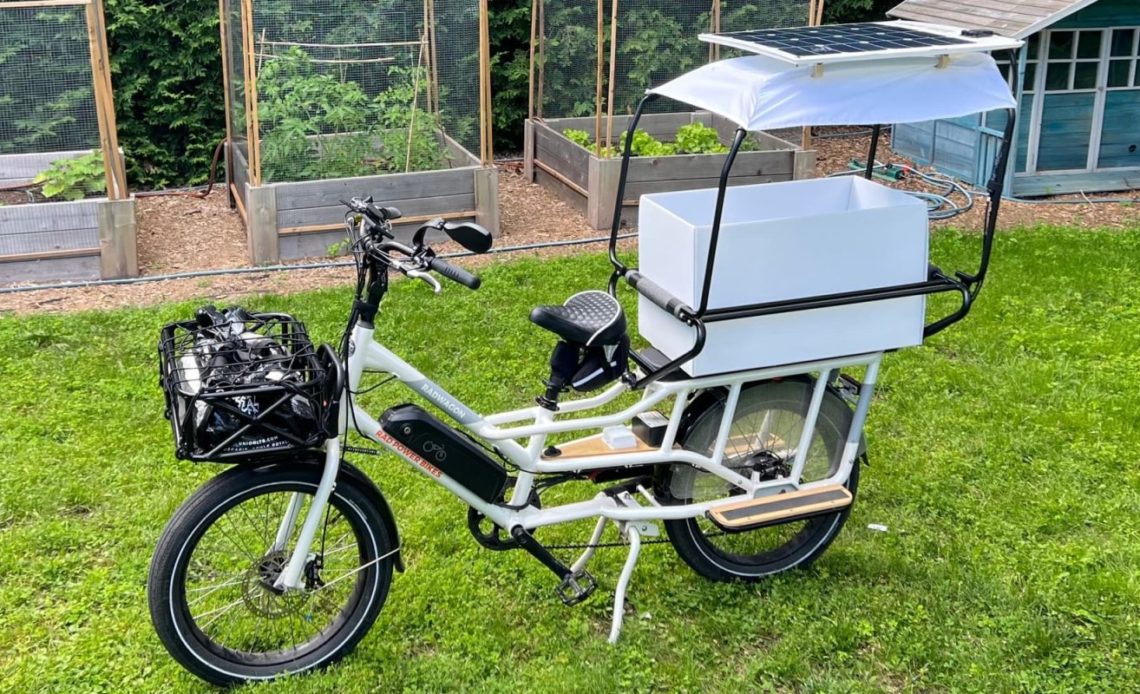 Last month we featured an awesome DIY solar cargo trailer that an Electrek reader built for his electric bike. Just in case you needed any more proof that our readers are some of the handiest and most clever eco-DIYers on the planet, we’ve got another impressive solar powered electric bike to show you. This time it does double duty a school drop-off vehicle for the kids and a grocery getter.

This build comes to us from Electrek reader Luke, who built this project during the pandemic with the goal of replacing a family car with a high-utility electric bike instead. He did so by heavily modifying his electric cargo bike.

While that bike is already an impressive cargo e-bike with plenty of utility, Luke made a number of upgrades to help the bike better perform the heavy duty daily use he required of it.

Before we even get to the solar addition, here’s a list of all the upgrades that Luke performed.

First he swapped out the stock controller for one with double the power. The new 1,500W controller is mounted underneath a varnished plywood platform that he built for the mid-frame. On top of that platform is a 200W DC-DC converter to provide a 12V outlet for any accessories Luke wants to run from the bike. He also painted it white to prevent it from heating up as much in the sun. Next to it is the solar charge controller, which we’ll get to in a minute. He used waterproof SAE connectors for all of the connections to make the system as water resistant as reasonably possible.

It should be noted that doubling the power of the controller, which essentially doubles the power pulled from the battery and supplied to the motor, almost certainly voids the bike’s warranty. With Luke’s level of handiness though, I’m not sure he really needs the warranty anymore.

From experience, I can also tell you that running your motor hotter with an overpowered controller can eventually fry the motor, especially if you push it too hard on hill climbing or other high power scenarios. Luke is careful about his power delivery though to keep that in check, and explained that if he ever does cook the motor, he’ll just replace it.

Next he swapped out the mechanical disc brakes for hydraulics, which he says have been a big improvement by reducing the need to adjust and tune the brakes. Hydraulic brakes don’t suffer from cable stretch, which can be exacerbated on heavy-hauling cargo e-bikes performing numerous stops while laden with kiddos and gear. He also added a suspension seat post to the saddle, helping improve the ride on the rigid-frame bike.

Finally he added a solar setup, consisting of a 50W SunPower solar panel mounted on a custom lightweight plywood frame. He used foam door seals to reduce vibration and captive threaded inserts instead of nuts for a clean-looking install.

The frame was connected to the , mounted with .

The solar panel feeds into a GenaSun MPPT boost charge controller to re-charge the e-bike’s battery directly from the panel.

The 50W solar panel trickle charges the battery, and a full day of sun would likely put around 50% of the battery’s charge back into it. In other words, as long as Luke uses around 50% or less of the battery per day, he likely would never need to plug the bike into an outlet to recharge.

That a distinct possibility, since the bike gets used for two main tasks: dropping the kids off at school and doing grocery runs for the family. For the former, the kids sit in the back (and Luke added some gorilla grip tape to the floor boards so the wood wasn’t as slippery when wet). The front basket holds their backpacks on the way to school.

The Rad Power Bikes Conestoga accessory that the solar panel is mounted above includes a waterproof enclosure for the rear passengers. To keep himself dry, Luke used one of those Chinese scooter waterproof canopies. He didn’t have a photo of it in action, but explained that the bike “looks like a bright blue rickshaw when installed”. He explained that he only pulls it out for heavy rains, but that it works well and can even withstand riding at speeds up to 35 km/h (22 mph) when properly tensioned in the front.

For grocery runs, Luke puts a corrugated plastic box in the kid carrier and can fit around four grocery bags in it.

It’s a slick solution that showcases how electric bicycles can be effective car replacers, even for more cargo-intensive tasks like shopping or carrying multiple passengers.

This project involved much more extensive modifications than most people would need, but that also means Luke ended up with a one-of-a-kind electric bike that is perfect for his exact needs.

In the past we’ve seen other simplified electric bike solar-charging setups (which I also recreated myself) and even learned of cases where other riders have saved tens of thousands of dollars over several years by giving up their cars in favor of electric bikes.