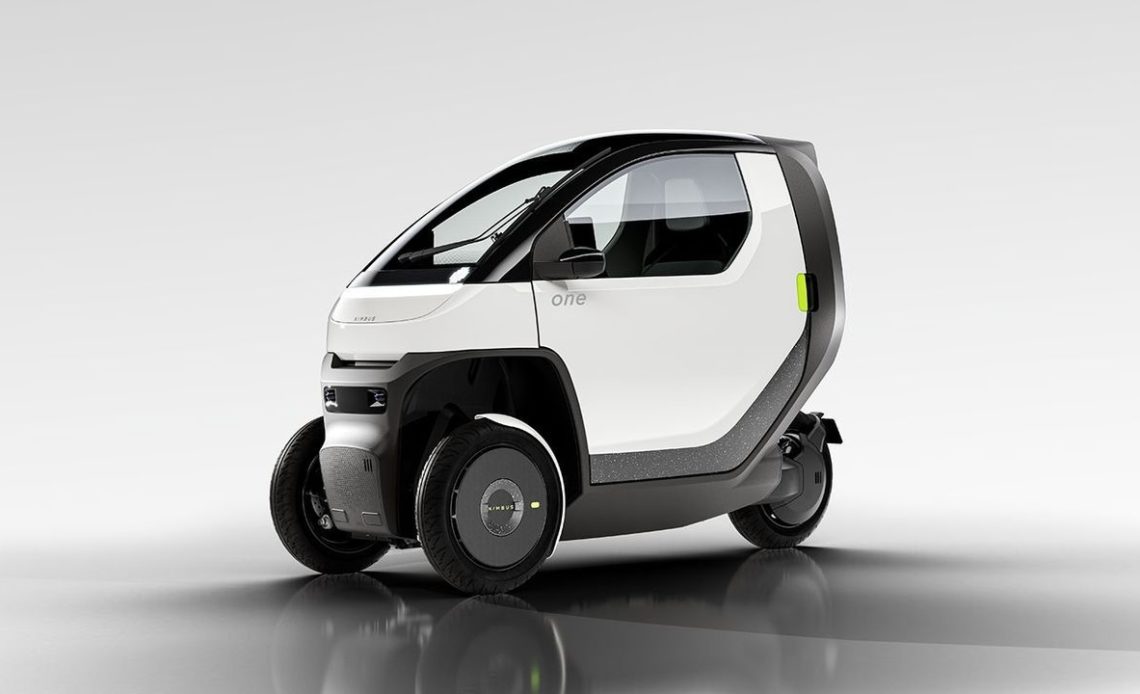 Two of the most cited reasons for car commuters shunning smaller vehicles like bikes, scooters and motorcycles are safety and weather. But the Nimbus One with its fully-enclosed design and car-like safety features is trying to solve both of those issues at once.

That’s the big idea, as the company says the Nimbus One “combines the convenience and cost of a motorbike with the safety and comfort of a car”.

The Nimbus One adopts a tadpole tricycle design, meaning it has two wheels in the front and one in the rear. That’s more stable than a typical delta trike design, though the real key to its stability is the leaning mechanism.

Similar to a bicycle, the Nimbus One leans into turns to prevent that “uh oh, I’m gonna flip!” feeling that rigid tricycles tend to create in hard turns. But unlike a bicycle, the driver (rider?) doesn’t actually have to manually lean the Nimbus One. Instead, the vehicle leans automatically based on the sharpness of the turn. That takes all the skill out of operating a leaning vehicle, making it much easier for beginners to control.

While the novel vehicle is closer to the size of a motorcycle and takes up around 25% of the parking space required by a car, it still adopts many car-like features. That includes a front airbag, fully-enclosed weatherproof design, windshield wiper, and even electronic safety features like “onboard cameras and AI to sense other vehicles and prevent collisions”.

There’s a main seat for a driver as well as space for either a second jump seat or cargo area behind the driver. Attachment points for a child seat will also be included, officially making this the coolest-looking electric vehicle in the daycare drop-off lane.

The Nimbus One is referred to as an autocycle, or three-wheeled vehicle class that usually includes standard seats, seat belts and a steering wheel. However, autocycles are a state-level class of vehicle in the US and there exists no federal-level classification for autocycles. That means they are federally classified as motorcycles and must conform to all applicable NHTSA motorcycle regulations. Autocycle laws exist in over half of the US, with most states requiring only a car driver license instead of a motorcycle license to operate them, as they operate functionally similar to cars. As far as I know, Massachusetts is the lone holdout that will require you to have a motorcycle license to operate a Nimbus One.

The Nimbus One’s technical specs still carry an “anticipated specs” disclaimer, but the designers are aiming for a top speed of 50 mph (80 km/h) and a range of 93 miles (150 km) at slower city speeds. A rather large 9 kWh battery would give it more capacity than entry-level Zero electric motorcycles.

The batteries are removable for charging away from the vehicle, and the team hopes to one day have Gogoro-style battery swapping kiosks. The battery pack is said to charge in just 1.2 hours from a Level 2 charger, though it requires a longer 5.4 hour charge from a wall outlet.

That 5.4 hour recharge sounds like it is pushing right up against the laws of physics for a common 15A breaker on a US 120V outlet, but perhaps the company is banking on you having higher power circuits in your home.

The Nimbus One’s designers say that it is the ideal alternative to larger vehicles, touting its carbon footprint as 1/3 that of a Tesla Model 3 and 1/10th that of a gasoline car.

At just 34″ wide (86 cm), it just might help you slice through traffic easier too, assuming lane splitting is legal in your state.

For Europeans that get to enjoy lane splitting more frequently than Americans, you’re in luck too. The Nimbus One is slated to begin deliveries in the US in Q3 of 2023, and European cities are apparently next on the list for anticipated deliveries in Q1 of 2024.

Reservations are now open for both US and European customers. To put your name on the list, you’ll have to initially plunk down just $100. Then it’s another $9,980 to buy the Nimbus one, or $200 per month to rent it.

I love the idea, but now it’s time to watch the execution. We’ve been wooed by fancy three-wheeled electric not-cars before, only to be left waiting at the altar.

The Nimbus One looks like a great idea, but there’s a long way to go from a prototype to a production line. Will the vehicle be able to achieve its anticipated performance specs? Will the price stay at $10k? Will they make the delivery timeline on one year from now? There are a lot of questions up in the air right now.

But if the Nimbus One can deliver, then this is exactly the type of small-format electric vehicle that could finally help get more Americans out of cars and into something smaller and more reasonable for our cities.

I’ve long touted the move away from large cars — even electric cars — and towards something much more sustainable. As much fun as Low Speed Vehicles (LSVs) and Neighborhood Electric Vehicles (NEVs) are (and trust me, they’re awesome!), we just don’t have enough good street-legal options in the US. Some companies are working towards solving this issue (check out my recent test drive of the Eli ZERO quadricycle below), but the more the merrier, I say.

What do you think of the Nimbus One? Let’s hear your thoughts in the comment section below.