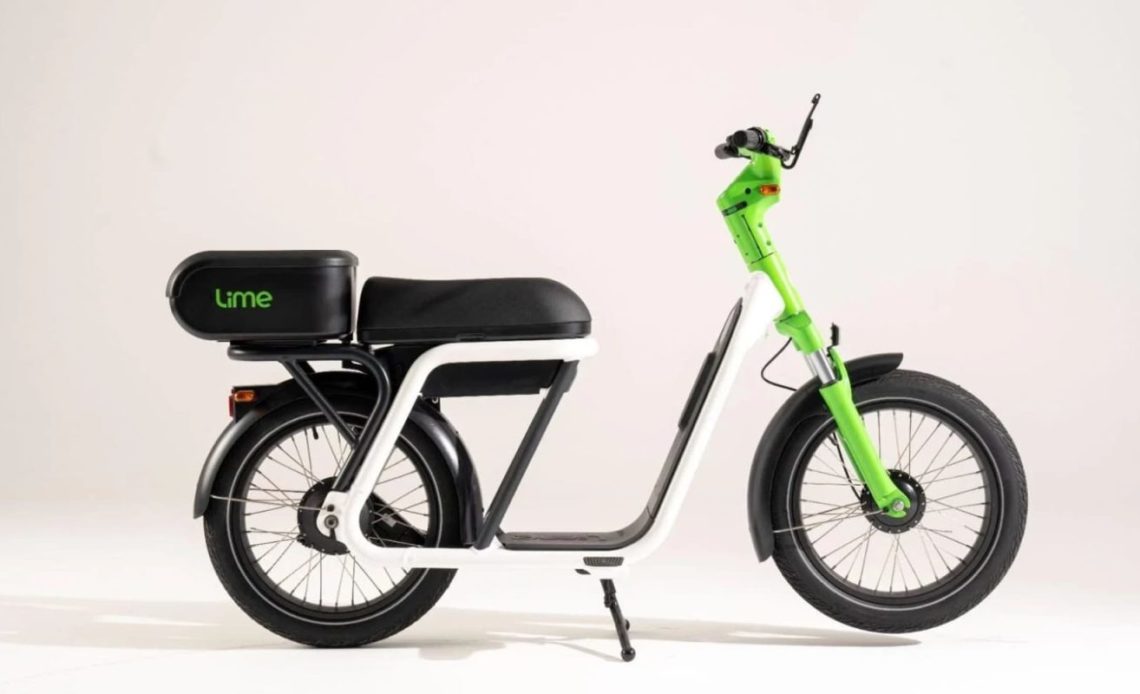 The new electric two-wheeler is getting its first testing in Long Beach, California, where several hundred units are expected to be piloted on the city’s streets.

Known as the Lime Citra, the new vehicle takes the form of an electric moped or motorbike – perhaps even a “noped” (due to the lack of pedals traditionally assigned to mopeds).

It isn’t that much faster than most standing electric scooters, clocking a maximum speed of just 20 mph (32 km/h). But for city riding, that’s as fast as any Class 2 e-bike and is likely to get riders to their location significantly faster than walking, and perhaps faster than an Uber or bus depending on traffic levels.

This isn’t Lime’s first brush with electric motorbikes, and actually comes after Lime quietly killed off its electric moped sharing that used NIU’s 30 mph (48 km/h) electric mopeds in NYC and Washington, DC. But unlike those electric mopeds, which were technically classified as motor vehicles, the Citra falls into a class similar to electric bicycles and standing electric scooters. That means lower speeds, lower power, and less regulation.

The design is also likely to be more approachable, offering a low step-through design and a form factor that feels more like a bicycle than a motorcycle. The front suspension and larger than scooter-sized wheels should even help give a fairly smooth ride that is more reminiscent of a bicycle.

Unlike an electric bicycle that often requires the user to pedal in order to activate the model, Lime’s Citra operates on throttle-only, meaning riders simply need to sit still and twist the throttle to go. That operation is more much like a motorcycle or scooter, and should also make the Citra easy to use for beginners and experienced riders alike.

The design includes a closing storage trunk behind the seat that should offer more cargo options than a typical bike or standing scooter.

We’re hoping with the new vehicle to get more women riders, as well. We want women to see this as something that’s for them in a way that they might not with scooters. There are various components like the fact that it’s seated, it’s a bit lower to the ground, it appears visually a bit safer because you have this more robust vehicle under you, but it’s not as heavy as a moped.

Electric moped sharing has been attempted by other companies, and rival Bird even launched a similar-looking option just before the COVID-19 pandemic, though it met an early demise during the tough early days of lockdowns.

Could seated electric scooters and electric mopeds help solve some of the issues commonly associated with standing electric scooters, namely more comfortable and stable riding positions (and perhaps fewer scooters knocked over on sidewalks)? Let’s hear your thoughts in the comments section below!