These are the best Android phones you can buy [November 2022] 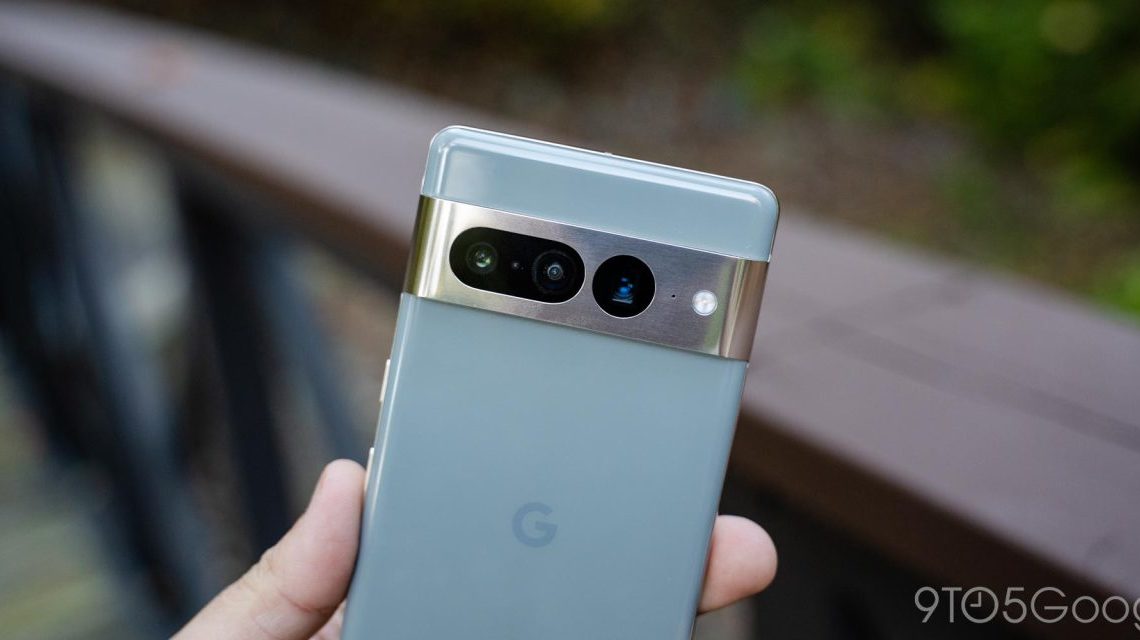 As Black Friday and holiday deals start arriving, it’s a great time to pick up a new smartphone. If you’re in the market for a new Android phone, these are the best options available as of November 2022.

9to5Google’s picks for the best Android smartphones look at the overall experience, pricing, reliability, camera quality, and length of software support to determine the best options. This list covers devices costing over $500 primarily in the United States.

The best value in a flagship phone

The first thing you might think of when you hear about a Google Pixel device is its camera and, yes, Google’s smartphones have the best cameras for still photography out there. But the offer goes beyond that.

In the camera department, the Pixel 7 and Pixel 7 Pro share the same primary 50MP camera with a 12MP ultrawide and a 10.8MP selfie camera that’s also used for face unlock. (There’s also an in-display fingerprint sensor.) The only big difference between the two is a 48MP camera with a 5x telephoto lens on the Pixel 7 Pro that greatly improves the zoom capabilities.

Under the hood is the Google Tensor G2 processor. While it’s not quite as powerful as the latest Snapdragon chip, it gets the job done incredibly well, all while improving on heat and connectivity issues from its predecessor. The main hiccup is still with battery endurance, as Google’s latest phones still won’t last quite as long as devices from Samsung and others. You’ll find 8GB of RAM and at least 128GB of storage on the Pixel 7 and 12GB of RAM with at least 128GB of storage on the Pixel 7 Pro.

The biggest reason why the Pixel 7 and Pixel 7 Pro are among the best Android phones in 2022 comes down to value.

The Pixel 7 starts at just $599 in the US, making it one of the most affordable devices on this list, despite having no major compromises to hit that price point. It has the same amount of memory, storage, and a similar overall experience to phones that cost $200-$300 more. The Pixel 7 Pro is a similar story at $899, undercutting devices well above that price with roughly the same package.

Google also offers excellent software support for both devices. You’ll get at least three years of major Android updates and be first in line for new versions, as well as quarterly “Feature Drops.” Monthly security updates continue for at least five years after the October 2022 launch as well. They, of course, both ship with Android 13 out of the box.

You’ll have to weigh out the pros and cons to make a final choice on the Pixel 7 series, but in our experience, these are both killer devices that punch above their price points. Whether you want the best camera or just a good deal, it’s hard to argue against the Pixel 7.

If you’re looking at the overall package from price to camera to performance, it’s really hard to beat the Samsung Galaxy S22 and Galaxy S22+. Samsung’s mass-market flagship phones are popular for a reason, and it’s because they are incredibly well-rounded.

Samsung’s camera array on the Galaxy S22 series is similar to the Pixel 7 series, with a 50MP primary camera, a 12MP ultrawide, and a 10MP camera with a 3x telephoto lens. There’s also a 10MP selfie camera.

Both the Galaxy S22 and Galaxy S22+ are currently eligible for Android 13 and will get major Android updates for four years after their early 2022 launch and security updates for another year after that. Rounding out the spec sheet is the Snapdragon 8 Gen 1 processor, 8GB of RAM, at least 128GB of storage (the microSD card slot is no longer available), and an ultrasonic in-display fingerprint sensor.

The Galaxy S22 starts at $799 while the Galaxy S22+ jumps up to $999. Both phones are reasonably good deals at their normal prices, but you’ll often find discounts or excellent trade-in deals from carriers, retailers, or Samsung itself.

If all you care about is getting the best of the best in your new Android phone, the Galaxy S22 Ultra is exactly what you’re looking for.

Samsung’s true flagship Android smartphone is one of the best you can buy because it tries, and mostly succeeds, at doing just about everything. The S22 Ultra has a huge 6.8-inch 1440p 120Hz AMOLED display with an in-display fingerprint sensor. That display also works with Samsung’s S Pen, which is held within the phone itself – that’s right, this is a Galaxy Note reborn.

The Galaxy S22 Ultra rests on a Snapdragon 8 Gen 1 processor, 12GB of RAM and 128GB of storage in its base model, and a 5,000 mAh battery with 45W wired charging and support for Qi. Like the rest of the S22 lineup, it currently has Android 13 and will get updates for four years after its launch and five years of security patches.

In the camera department, Samsung further flexes its muscle a bit with a total of four camera sensors on the back of the phone. There’s a 108MP primary camera, 12MP ultrawide, and two telephoto lenses. Both are backed by a 10MP sensor, but one is a 3x zoom while the other manages 10x. There’s also a 40MP camera on the front for selfies.

The Galaxy S22 Ultra retails for $1,199, but like the rest of Samsung’s smartphones, it’s not at all hard to find it at a discount, especially around the holidays and especially from Samsung.com.

These honorable mentions aren’t our first pick, but they are still excellent smartphones, often serving a specific need or customer.

Take a step into the future

Foldable smartphones aren’t for everyone yet – but they keep getting better and better, and the Galaxy Z Fold 4 and Flip 4 are proof.

The Galaxy Z Flip 4 brings back the flip phone that dominated the market before the smartphone. It folds in half to close, with a small outer display on a body that opens up to a 6.7-inch 120Hz display. When opened up, it’s virtually the same as your average smartphone, but it can shrink down to a fraction of the footprint of other devices.

The Galaxy Z Fold 4 builds on the smartphone experience by shoving a tablet inside of your normal device. When closed, there’s a full-size display that opens up to reveal a display the size of a small tablet. That inner display can show up to three apps at once (or more), offers support for Samsung’s S Pen for precision input, and really just expands what your smartphone is capable of.

Of course, this all comes at a price. The Galaxy Z Flip 4 costs $999 – around the same price as a comparable nonfolding phone, but with some minor compromises on battery life and camera quality. Meanwhile, the Fold 4 costs $1,799, a hefty price to pay for any smartphone. These foldables truly are some of the best Android phones you can buy, but they’ll need to be worth it to you. Luckily, Samsung offers some killer trade-in deals.

Save a bit on last year’s experience

If you want to save a few bucks, going the “year-old” route is a great way to do so. Year-old phones used to come with huge compromises on Android, but that’s a problem that’s quickly starting to go away.

Take the Pixel 6 and Pixel 6 Pro, for instance. While the Pixel 7 series offers better connectivity and heat management, you’ll get 90% of Google’s latest phone by buying the prior model, and you’ll do it while still getting plenty of software support. If you buy a Pixel 6 this holiday season, you’ll be getting two more years of major Android updates and four more years of security updates, while potentially saving hundreds of dollars.

Best Buy, for example, sells the Pixel 6 Pro with 256GB of storage for just $699. That’s $300 off of its original price! Amazon will also sell a regular Pixel 6 for under $350 through its “Renewed” smartphone store.

The same applies to recent Samsung devices. The Galaxy S21 series or Samsung’s Galaxy Z Fold 3 are killer buys that have most of the same features and specs as the 2022 models. And all of Samsung’s 2021 flagships are eligible for four years of Android updates and five years of security updates too, meaning they won’t be hurt all that much.

You can get the Galaxy Z Fold 3 for $1,199 at Samsung’s website, $600 off its usual price tag. Samsung also sells the Galaxy S21 refurbished for a couple of hundred dollars off with certified refurbished models. Amazon sells refurbished Galaxy S21 devices at a steal too, often for under $500.

Plus, you can even pick up a device used, often for even bigger discounts. is always a good place to check, and Swappa is a tried-and-true option for buying (and selling) used phones safely, and there are some genuinely good deals to be found both on last year’s phones and even this year’s.

We have a full list of the best affordable Android smartphones, but a couple of key budget picks include the following.

If you’re looking for the most bang for your buck, the Google Pixel 6a is one of the best choices out there.

It has the same Tensor processor as the Pixel 6 and Pixel 6 Pro, the tried-and-true cameras of the Pixel line’s history, and a solid display that’s pretty compact at 6.1-inches. It has good battery life – though no wireless charging – and will get three years of major Android updates with security patches going for five years after launch.

The Pixel 6a does all of that too, for just $449. And around the holidays, the Pixel 6a is easily the best deal on an Android smartphone. For Black Friday, it’s down to just $299, a deal that simply can’t be beat.

Samsung Galaxy A53 and Galaxy A23

On Samsung’s side of the equation, the Galaxy A53 and Galaxy A23 are solid choices on the budget end in the US. The Galaxy A53 has a 6.5-inch 120Hz display that’s just brilliant at this price with a 64MP primary camera on the back and a solid update policy. Samsung will offer major Android updates for four years and security updates for a year after that.

The Galaxy A23 has a 6.6-inch 90Hz display and a 50MP primary camera. It’s a pretty big bang-for-your-buck offer on paper, though it does come with one catch. While this phone is a good value, it only gets two major Android updates, with four years of overall support. This is still one of the best update policies you’ll find at this price point, though.

The Galaxy A53 usually costs $449 but is easily found for less with deals, and it can be purchased from Samsung directly with hefty trade-in values. The Galaxy A23, meanwhile, runs $299 at retail and can also get some solid discounts if you trade in your current device to Samsung.