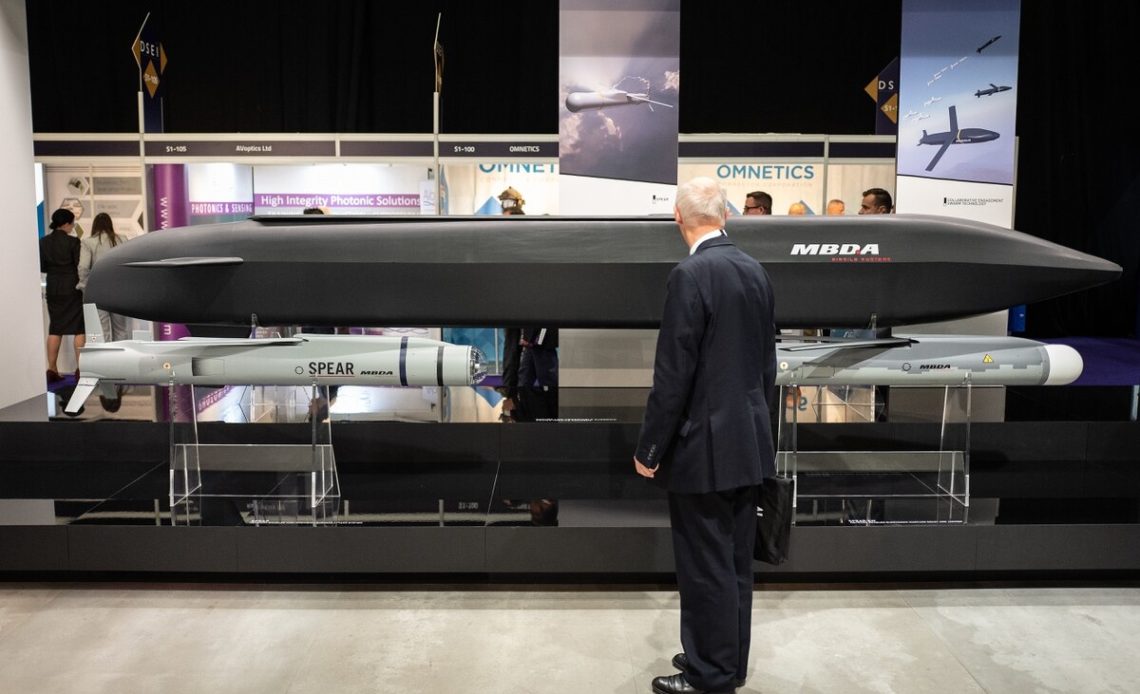 LONDON — British F-35B combat jets are to be equipped with a new mini cruise missile following the signing of a £550 million (U.S. $750 million) production contract by the Ministry of Defence and contractor MBDA, the company announced Jan. 6.

The deal should see the Spear 3 missile achieve initial operation capability on the aircraft in 2025, making it the primary air-to-ground weapon for the Lockheed Martin-built jets now coming into service with the Royal Navy and Royal Air Force.

For the moment, the weapon, which has a range in excess of 140 kilometers, is destined to be fitted solely to the F-35B models. But that could change, with Ministry of Defence officials admitting there is a possibility Spear 3 might also eventually be installed on the Royal Air Force’s fleet of Eurofighter Typhoon fighters.

“There is growing recognition around the benefits of widening platform access and developing a range of Spear variants in order to maximize commonality within Spear, for both additional military capability and to meet potential demand from export customers,” one defense official said.

“There is an aspirational requirement to integrate Spear 3 operational capability onto Eurofighter Typhoon, and both Italy and Germany [partners with Britain on the Typhoon program] are showing interest,” the official added.

A joint team of MBDA, BAE Systems and the MoD have previously undertaken ground trials and fit checks on a Typhoon launcher carrying three missiles.

MBDA’s U.K. arm has already test fired Spear 3 from a Typhoon as far back as 2016. According to the company, guided firings of the weapon from a Typhoon in support of the Spear 3 development for the F-35B will start within 18 months.

Among the Spear variants thought to be interesting the MoD is an electronic warfare weapon.

MBDA was awarded a technology demonstration contract in 2019 to investigate such an application. That deal has been extended, and work is currently ongoing in association with partner company Leonardo.

The new demonstration and production contract announced today follows the successful implementation of the £150 million weapon development contract placed in 2016 and a £411 million deal in 2019 for integrating Spear 3 onto the F-35.

Doug Barrie, the senior air analyst at the International Institute of Strategic Studies think tank in London, said the availability of the weapon will mark a significant step forward for the British F-35B strike power.

“Spear 3 is a key element of the U.K. F-35B air-to-surface capability, intended to provide a medium-range-powered weapon with a credible internal carriage load against a broad target set,” he said.

MBDA chief Eric Beranger said, “stand-off, network enabled and swarming weapons are a key part of the MBDA vision — Spear is leading the way with these technologies and is the most technically advanced weapon of its type.”

The seven-year demonstration and production contract will see missile and launcher manufacturing slated to begin in 2023.

The F-35B can carry up to eight Spear 3 missiles in its internal weapons bay and further missiles on the wing.

Like the Brimstone, it uses both millimeter-wave and semi-active laser seekers.