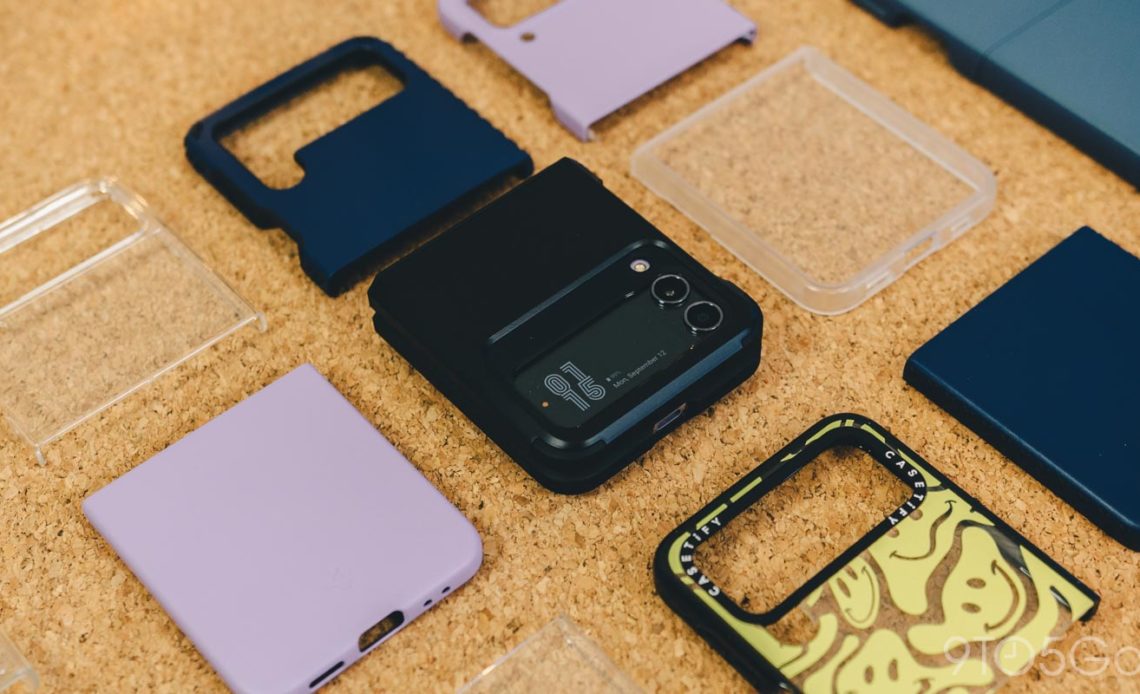 The Galaxy Z Flip 4 can be a difficult phone to buy a case for. Because of the bending motion, there’s an added complication and if done wrong, can make for a case with a bad experience attached. Here’s our roundup of some of the best cases you can get for the Galaxy Z Flip 4.

Does the Galaxy Z Flip 4 really need a case?

How we look at some phones and the cases that protect them has definitely changed over the years. The iconic clamshell design has provided quite the challenge for case manufacturers, forcing them to come up with solutions that actually protect all of the phone, even when closed and the hinge is exposed.

In our use of the Z Flip 4, the phone has proven to be a slippery device. The glossy metallic sides make for a loose grip and the matte glass back doesn’t provide a lot of friction. Adding a case can give that extra little bit of grip that’s necessary.

While the Z Flip 4 is durable, there are several surfaces to protect. Of course, you run the risk of breaking the UTG screen of the inner display when the phone is open, but even closing it and dropping it risks the outer display cracking. No matter how your Flip is oriented, you want it protected from most things you can throw at it.

The Spigen Tough Armor case might be one of the best Z Flip 4 cases of the bunch. It leans more on the thicker side of things, which is ok because the Z Flip 4 is remarkably thin, all things considered. With that, it doesn’t add too much to the foldable, yet it gives it a lot of grip and is still very comfortable to hold.

The cutouts are done well and don’t cover the side buttons, as some cases do. The bottom portion has a chamfered edge to make opening the Z Flip 4 easy to do. On top of that, the outer display cutout is done well and doesn’t impede being able to touch the display.

Perhaps the best part about this case is the hinge protection. Between the two pieces of the Tough Armor case is a thin piece of plastic that slides in and out of the bottom half of the case. The plastic is flexible enough that easily bends into the other piece, yet it would definitely offer some protection against the hinge if dropped.

With the Tough Armor case comes some pre-installed adhesive strips that help your Flip 4 stay in the case. Without it, the phone would slip out a little every so often, which gets extremely annoying over time.

Overall, the Spigen Tough Armor case is the best case we’ve been able to use. This is one that comes highly recommended to users, considering it isn’t extremely bulky, yet it adds some much needed protection and looks sleek while doing it. The Spigen Tough Armor comes in at $69.99, which isn’t cheap, but it’s well worth it.

If you’re looking for something extremely thin and easy to pop on and off, you might want to look into the Spigen Air Skin. The colored versions also come with adhesive strips, though the clear version comes with some well-hidden patches that don’t detract from the look.

First off, the Air Skin will not offer as much protection as the Tough Armor, which is a given. Besides that and without drop-testing it ourselves, the case feels like it could hold up to quite a bit of damage. If you’re prone to drop devices, go with something a bit heavier. The Air Skin feels more like a scratch-proofing method for the Z Flip 4.

If that’s what you want, the Air Skin does it well. The case is very minimal and feels really good in the hand because it doesn’t add much in the way of bulk. The adhesive patches and strips help the case stay in place, so I never had an issue with my Flip 4 slipping out at all.

Since the Air Skin is minimal, you won’t see hinge protection at all, so that’s something to be aware of when using it. Other than that, the Air Skin is a solid case that won’t add bulk to your device and will keep it safe from scuffs and scrapes.

True to its name, the Grip case does a fine job of adding some friction between the device and your hand. All along the side of the case are small three-point lugs that are supposed to add some grip when holding the Flip 4. In our testing, the lugs do provide a little friction, though when you first start using the case can be a little sharp around the edges. Hopefully, those lugs will round out a bit after some time.

The cutouts where the buttons are were done well, with the volume rockers feeling tactile and very clicky, which is what you want. Under those, the power button cutout is wide and gives enough from to comfortably scan your fingerprint.

Internally, the Grip case from Incipio has a couple of adhesive bars that run horizontally. Much like other cases, those help the Flip 4 stay in place. Incipio makes use of what it calls “impact struts” that act like springs in the device, which apply some kinetic energy to reduce the impact force when your device drops.

If I had to drop test with just a couple of cases, this is one of the ones I would do it with. Incipio has a track record of good cases, and the Grip case for the Flip 4 doesn’t seem to be any different in terms of durability.

The Grip case comes in at $69.99, though it’s worth it with how well it’s built and the lack of bulk it adds to the device. This is one of the cases that I’d have no issues dropping almost $70 on.

In general, you can either choose between good protection and a bland or boring outer shell, or you can go with a lively case and little to no actual protection. Well, cue the girl from the Old El Paso commercial because Casetify offers both.

Casetify’s Impact Series is a good blend between a lively case and great protection. The case itself is made from a gel-like material that feels good in the hand, but would stand up to a few good drops. With that comes a little bit of added bulk to the case, so it does lose that minimal feeling in a way.

One thing I did notice was the small space left for the fingerprint sensor. The case itself sort of gets in the way and unless you have smaller than average thumbs, it can be hard to get a quick fingerprint read. The buttons above it are nice and clicky, so there are no issues there.

Much like most cases, you won’t see any hinge protection. Besides that, the rest of the device is pretty well protected. The cutout for the outer display showcases Casetify’s trademark camera rim with the logo on either side. I got the “Acid Smileys” case, though there are literally hundreds of designs to choose from, so there’s no doubt you’ll find one you like.

Overall, the Casetify Impact Series makes for a good case with a well-protected shell. You can grab one from Casetify starting at $72.

If you’re stuck in the middle between something like the Spigen Tough Armor and Air Skin case, you may want to check out the Thin Flex case from Otterbox. The Thin Flex case is a great middle ground because it offers the optimal protection Otterbox is known for, while adding minimal bulk to the thin Z Flip 4.

The cutouts are well placed, though the Thin Flex case doesn’t offer the most tactile volume rocker buttons. Under that, the fingerprint reader and power button are given plenty of room to breathe. Something that stands out is the added chamfer on the bottom portion of the case so that when the case is closed, you can still access the power button comfortably.

Besides that, the Thin Flex is relatively straightforward. It feels good in the hand and offers a great amount of protection. This case comes in at $49.95 and comes in an antimicrobial version as well.

Of the manufacturers we’ve featured in this best of series, there are a few cases we tried that don’t quite fit under the “best” category. Here are some honorable case mentions we think are worth a look into but don’t quite meet our best expectations.

Otterbox is known for the thick ultra-protective cases that could take a hit from a car and still protect the device inside. That’s more or less what the Symmetry Series case is. It’s a thick case that offers incredible protection, even around the hinge. But that’s where the issue lies in the case.

Much like the Tough Armor case from Spigen, the Symmetry case from Otterbox has a piece of plastic that slides over the Z Flip 4’s hinge. Unfortunately, the plastic in the case that protects the hinge is just too thick. What ends up happening is that plastic piece actually pushes the case off of the Z Flip 4. About eight out of ten times this is the case, and closing the opening the Flip 4 from a shut position ends in having the readjust the case.

While the protection this case offers would be great, the issue comes up way too much for this case to be one of our recommendations, especially at $69.95.

Both Spigen-made cases in this best Z Flip 4 cases roundup have been recommended and meet our expectations. The Thin Fit Ring does as well, however, it isn’t for everyone. The case itself is very similar to the Air Skin, except t has a ring on the back for better grip.

This provides a couple of pros, with one being that the plastic holding the ring on acts as hinge protection. On top of that, you have something to hold on to when using the device so that it doesn’t go flying out of your hand.

Besides that, it really feels like the ring gets in the way more often than not. To add, the metal ring can be loud and I find myself hearing a heavy “clang” every time I put the phone down. Of course, maybe the ring just isn’t for me. If you like the idea of a ring on your Air Skin case, you might be into the Thin Fit Ring. The case comes in at $64.99.

Overall, we’ve only been able to test a small portion of the cases out there, but out of the Z Flip 4 cases we have tested, we’re happy with what we’ve found. The Spigen Tough Armor case remains our top tick with the Incipio Grip in a close second for best Z Flip 4 case. Besides that, you really can’t go wrong with any of the quality Z Flip 4 cases mentioned.