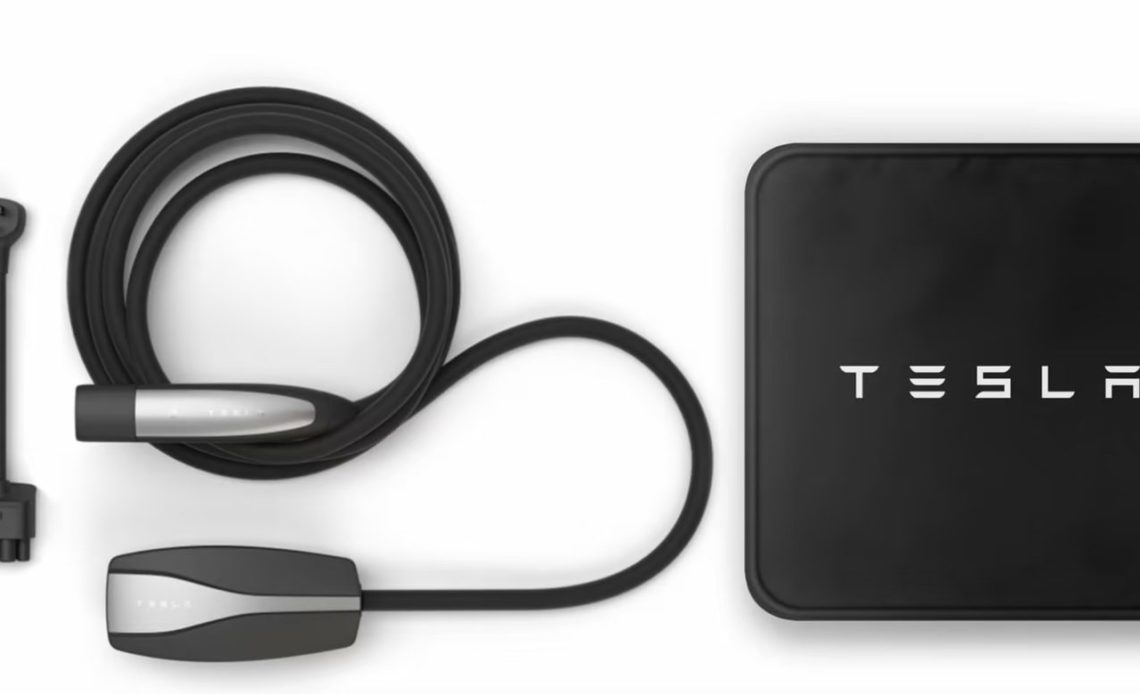 Tesla changed its long-standing policy to deliver every vehicle with a mobile charging cable and instead, it starts selling them separately for $400 for level 2 charging and $275 for level 1.

The move is reminiscent of Apple removing the included USB charging brick with the iPhone.

With charging being one of the biggest concerns for electric vehicle buyers, it made sense for Tesla to include a mobile charging cable with every vehicle sold.

The included charging kit evolved over the years.

Tesla used to include a charging cable with both a NEMA 14-50 (level 2) connector and a connector for a regular outlet (Level 1).

The automaker later decided to drop the NEMA 14-50 connector from the included bundle and only included the NEMA 5-15 adapter, which is for a regular outlet. You could buy the Level 2 connector separately.

With a max power output of 1.3kW, the included connector enabled charging speeds between 2-3 miles of range per hour. It’s not much, but it is still better than nothing and good for overnight charging.

For anything better, Tesla owners would have to install a level 2 charging station at home.

Now Tesla has gone a step further and decided to not include any charging cable with its new vehicles.

CEO Elon Musk said that Tesla believes that the usage amongst owners was too low to justify supplying the cable with every new car delivery:

“Usage statistics were super low, so seemed wasteful. On the (minor) plus side, we will be including more plug adapters with the mobile connector kit.”

The move is reminiscent of Apple’s decision to stop supplying USB charging bricks with new iPhones a few years ago and the company also cited wastefulness at the time.

However, the similarities stopped there. Apple could rely on the fact that most customers already had several USB/Lightning bricks, but that’s much less likely to be the case for Tesla buyers, especially those new to EVs.

Also, even if most users don’t use the mobile cables often, it might be extremely useful to keep in the car for a worst-case scenario or early in the ownership experience before you can get a home charging station installed.

Compounding the concern is that both of Tesla’s mobile connector are listed as “out of stock” on its website:

So for people taking delivery of new Tesla vehicles without included connector, they are going have to find an alternative somewhere else.

I’m not a fan of this move. I know everyone has a different situation, but I know a lot of owners who primarily use their included mobile charger – obviously more so when Tesla included the NEMA 14-50.

Personally, I did probably over 80% of my charging on my Tesla Model 3 with the included charger.

I think it just makes sense to sell an electric car with a charging device – even if it doesn’t end up being your primary charging product.

For what it is worth, Tesla isn’t the first company to do this. We learned earlier this year that Kia’s EV6 wouldn’t be coming with a charging cable and at the time we said:

The EV6 doesn’t come with a Level 1 or 2 charging cable, for better or worse. Talking to the team I think the thinking is, why add a $1,000 part and the complexity associated with it when people might already have a charging station at home, might not have a garage, and/or could probably pick one designed best for them for a cheaper price at an online retailer. For someone like me that has like five different EV chargers at the house already, that makes sense, but as a first-time EV buyer, it adds significant complexity to getting an EV. Throwing in a $200 charge cable would make a lot of sense

I know a lot of owners just like to carry the mobile connector in the car at all time in order to get a trickle charge somewhere if need be.

What do you think? Is Tesla being greedy here or is it a good move? Let us know what you think in the comment section below.