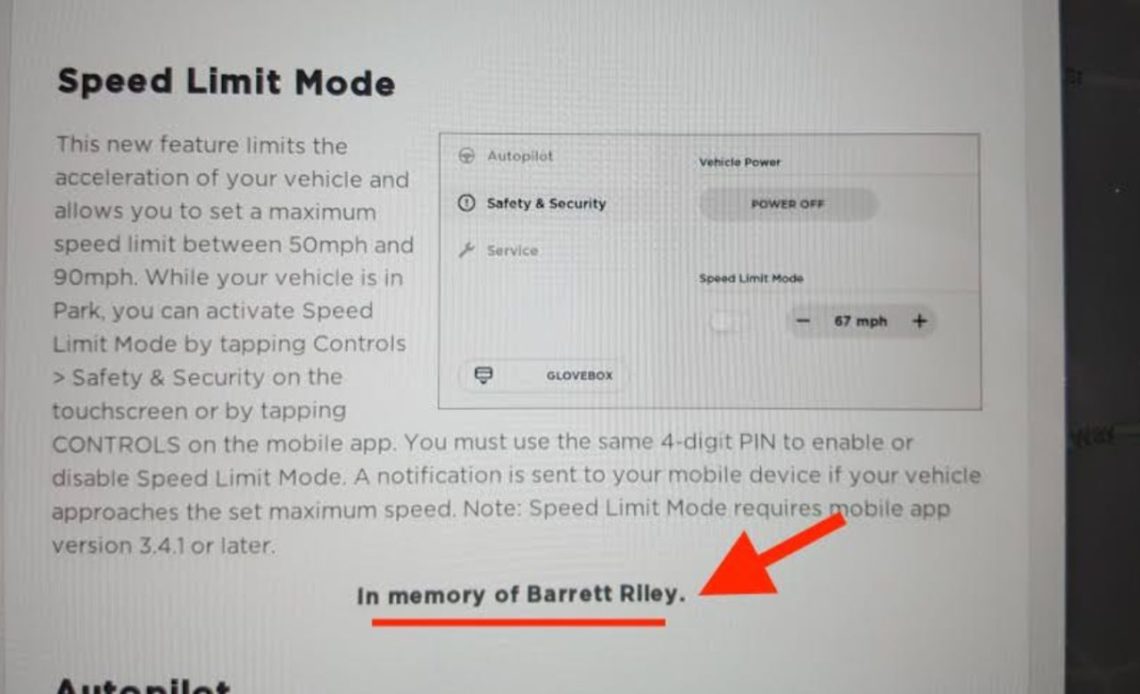 Tesla has been found only 1% liable by a jury in a case over a fatal crash of a teen, and dedicated a feature to his memory.

In May of 2018, two Fort Lauderdale teens were killed and a third was injured after the Tesla Model S driven by 18-year-old Barrett Riley crashed into a concrete wall at 116 mph.

The vehicle quickly caught on fire after the crash, which is not uncommon after violent crashes at high speeds regardless of its electric or gas-powered.

In 2019, Riley’s family decided to sue Tesla over what they claim was a defective battery pack that led to the fire and that Tesla “failed to warn purchasers of its vehicles of the battery’s dangerous condition.”

Furthermore, the lawsuit that Riley’s parents had a speed limiter installed at a Tesla service center two months before the accident, but Riley apparently had it removed at another service center without his parent’s knowledge, which they blamed on the automaker.

It took three years to go to trial, but the jury has now delivered its verdict and according to Law360, they awarded the family $10.5 million even though they could only put 1% of liability on Tesla with the rest going on the Riley and his father:

The jury found Tesla negligent for a crash in a 2014 Model S that killed two Florida teens and awarded the family $10.5M. However, that payout is the result of only 1% liability and the bulk of blame was assigned to the teenaged operator and his father.

Shortly after the accident, Tesla released a new speed-limiting feature in a software update dedicated to Riley. The feature allows any Tesla owner to input a speed limiter on its vehicles, instead of going through the company like Riley’s family did.

Tesla originally commented on the lawsuit:

Our thoughts continue to be with the families affected by this tragedy. Unfortunately, no car could have withstood a high-speed crash of this kind. Tesla’s Speed Limit Mode, which allows Tesla owners to limit their car’s speed and acceleration, was introduced as an over-the-air update last year in dedication to our customer’s son, Barrett Riley, who tragically passed away in the accident.

The automaker didn’t comment on the jury’s verdict, but Tesla no longer has a press relations department.