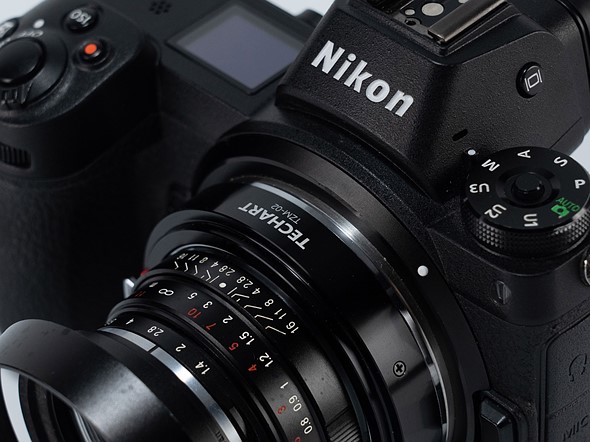 The Techart TZM-02 is compatible with Nikon’s latest APS-C and full-frame Z-mount cameras, including the flagship Z9 model, the Z6 and Z7 series, Z50 and more. The adapter can be combined with additional adapters to deliver autofocus for ‘literally any lenses,’ per Techart, including Canon EF, Nikon F, M42, Pentax K and more. Techart does outline a few restrictions, however. You can’t use LTM/M mount lenses with an infinity lock button. Additionally, when using lenses heavier than 500g (17.6 oz.), it’s recommended users supports the lens, either with their left hand or some camera support system. Lenses up to 2,000g (4.4 lbs.) can be used so long as there is adequate support.

The TZM-02 adapter itself is incredibly compact considering the features it offers, adding just an extra 4.5mm (0.18″) between your Z camera and an attached lens (or second adapter). Unlike the original TZM-01 adapter, which included a bulge to house internal components, the TZM-02 delivers a smooth external design so it won’t interfere with any accessories or the dual-grip design of the Nikon Z9. The TZM-02 is more rugged than the TZM-01, too. The original adapter only supported lenses up to 300g (10.6 oz.), which is a pretty lightweight lens, especially if you stacked a second adapter on the M to Z adapter.

The improvements don’t stop with the design. Compared to its predecessor, the TZM-02 sports an additional three servo motors (four radially-positioned motors versus a single larger motor in the bulge). The improved motor power delivers faster focusing speed and improved autofocus performance, including enough speed to deliver autofocus during video recording, a feature not possible with the original TZM-01. The TZM-02 also promises quieter performance, although specific decibel figures aren’t provided.

Many improvements and new features included in the TZM-02 adapter were first seen in last year’s Techart LM-EA9 adapter which allows users to attach M-mount lenses to Sony E-mount mirrorless cameras. The design and features are similar between the LM-EA9 and the new TZM-02, including support for AF-S, AF-C, Eye-detect AF and face detection. Both adapters support in-camera image stabilization and allow easy firmware updates using a built-in USB port on the adapter itself.

Techart has other adapters available for Nikon Z cameras, including the TZE adapter that adapts E-mount lenses to Z, and the TZC-01, a Canon EF to Z adapter. You can browse the full assortment of Techart’s adapters here, including products for adapting lenses to E-mount, GF-mount and XD-mount mirrorless cameras.

The Techart TZM-02 is available to order now directly from Techart for $399. Shipping should begin in late January. If you purchased from Techart, the adapter includes a one-year warranty. When converting a manual focus lens to autofocus, users should have realistic expectations regarding autofocus performance relative to native AF lenses. Techart wants prospective customers to read this information before purchasing one of its adapters.