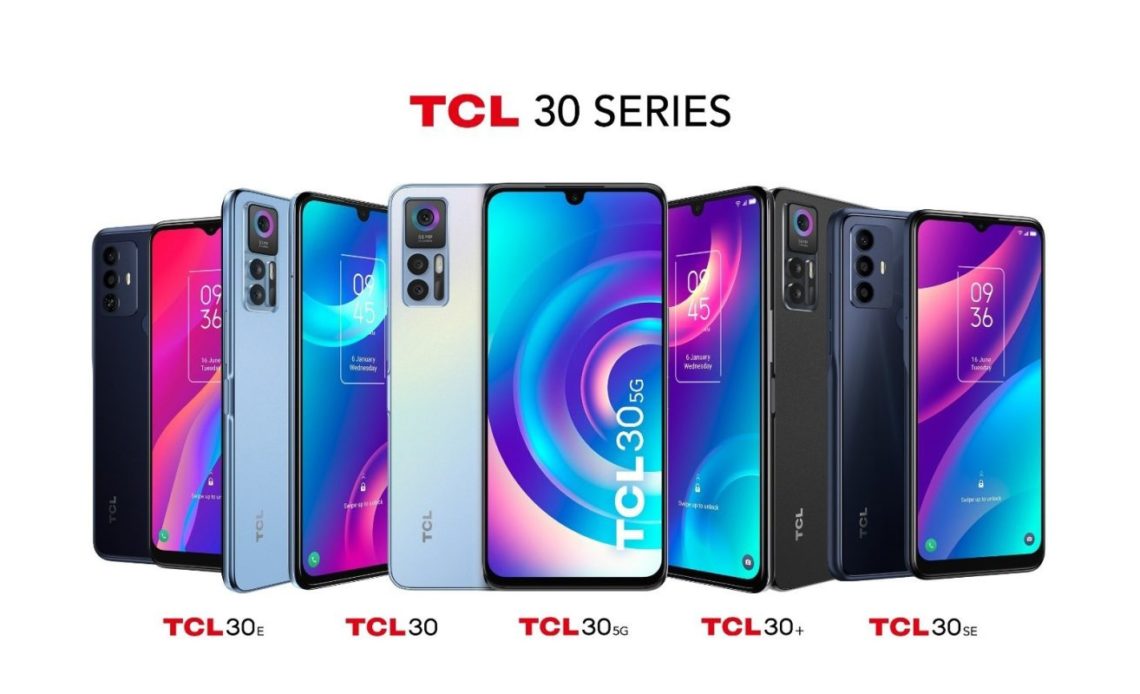 MWC 2022 brought the debut of a lot of new tech, and TCL arrived at the event with an updated Android portfolio of tablets, foldable concepts, and the rest of the TCL 30 series.

TCL announced the first batch of its 2022 smartphone lineup in January at CES. The 30 V and 30 XE have since debuted on US carriers, but the company was holding back its full lineup until now. The TCL 30 series has arrived with five new Android smartphones, all with affordable price tags.

TCL’s “flagship” at least for this batch of phones is the TCL 30 5G, which costs €249 and launches in April. This is the only new phone TCL is announcing with 5G support. It packs a 6.7-inch FHD OLED display, a MediaTek Dimensity 700, and a 5,010 mAh battery. There’s a 50MP main camera on the rear, 2MP depth sensor, and 2MP macro camera. A 13MP selfie camera can be found in the display notch.

Meanwhile, the TCL 30 Plus and TCL 30 both have the same display and camera array, but with some minor tweaks. First and foremost, neither device has 5G support. They also drop down to a MediaTek Helio G37 chipset and the TCL 30 has a 8MP selfie camera down from 13MP. Pricing lands at €179 for the TCL 30 and €199 for the 30 Plus, both being available today in Europe.

The TCL 30 E and SE are the cheapest of the bunch, at €139 and €149 respectively. Both phones use the same 6.52-inch HD display, the Helio G25 processor from MediaTek, and 5,000 mAh batteries. The only difference between these two devices is the camera, with the TCL 30 E dropping the 2MP macro camera. The rest of the camera array is identical to the rest of TCL’s lineup. 30 E launches in April, while the SE is available in Europe now.

TCL is shipping all of these new phones with Android 12, but has made no promises on future software support.

Next up, TCL also launched a batch of new Android tablets releasing in Asia under the “NXTPAPER” brand. The TCL NXTPAPER MAX10 comes in Wi-Fi only and LTE capable variants, with a 10.36-inch FHD display, anti-glare glass, and MediaTek 8788 processor.

The TCL TAB 10 HD 4G is launching today in Europe from €179, with a 5,500 mAh battery and an undisclosed octa-core processor. The tablet is, of course, LTE capable and designed for media consumption primarily. An FHD version will launch in Asia in March for €199.

The biggest catch with this new lineup is that TCL is launching its new tablets with Android 11, with no word on when they’ll get Android 12, or if further updates will come in the future. TCL also teased an upcoming 12-inch tablet that will join the lineup “soon.”

Finally, TCL also took to MWC to show off more foldable concepts. The company has still yet to actually release a foldable – though it did come close with a Galaxy Z Flip competitor last year – but has some great ideas for the technology.

While we didn’t get the chance to spend any hands-on time with these products, TCL showed off the “Ultra Flex” and “Fold n Roll” The folks over at Android Central and Engadget spent some hands-on time with these devices. The “Ultra Flex” is a foldable with a hinge that accommodates the device folding both inwards like a Galaxy Fold, as well as outwards like some older releases from Huawei. It’s certainly an interesting design, but on a personal note, I’m not sure where the form factor would actually be useful.

Meanwhile, the “Fold n Roll” is a foldable that… well it folds closed like a Galaxy Fold, but also has a rolling display to offer even more canvas. More screen is the entire point of foldables, so this one has obvious utility. TCL previously showed off this concept before it was actually a physical device, but it’s cool to finally see it in action.

Unfortunately, TCL still has no concrete plans to ever release these devices, much less release dates for either.