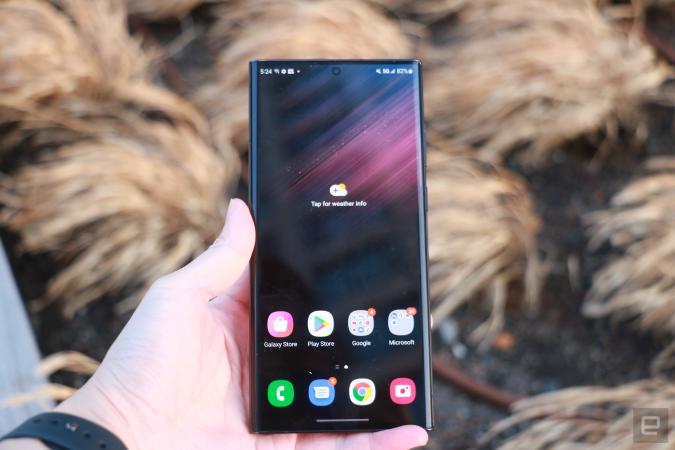 When we put together our ultimate list of current-model smartphones, Samsung’s Galaxy S22 Ultra easily won out as the best Android option. It’s on sale at Amazon right now for $300 off the list price, bringing it down to just $900. That’s only ten bucks more than its lowest ever price during October’s Prime Day — still a strong deal. We deemed the S22 Ultra “an excellent phone and the best premium Android flagship you can buy,” before awarding it a solid score of 89. And because Samsung has promised at least four years of updates/support, its an investment that won’t leave your phone high and dry in just a couple years.

Those who remember Samsung’s Note series will find a lot that feels familiar here, especially the S Pen, the on-board stylus that lets you jot notes, mark up photos, draw doodles and use it as a cursor. In fact, the S Pen is part of what differentiates the S22 Ultra from the S22+ and the S22, as neither of the latter include the stylus.

The S22 Ultra also offers a bigger camera setup, larger screen and longer battery life than its less-premium siblings. The Ultra’s cameras include a 108-megapixel main sensor, a 12-MP ultrawide option and a pair of 10-MP telephoto lenses. And while there’s a new Adaptive Pixel feature intended to capture more light and make images clearer, we didn’t find a huge difference in our tests. That said, the S22 Ultra photos held their own against those from comparable phones made by Apple and Google.

The huge 6.8-inch 120Hz OLED screen is smooth, quick and colorful (in fact, we called it “sumptuous”). In our battery tests, we got 17 hours and 16 minutes in a video rundown, which does happen to be a shorter lifespan than its predecessor, the Ultra S21 — an issue that may have to do with the fact that the S Pen draws power, even while stowed in its slot.

The tough exterior has an IP68 dust and water resistance rating — meaning it can handle a dunk in five feet of water for up to 30 minutes — and the display is wrapped in the latest Victus+ Gorilla Glass for improved crack- and scratch-resistance (it survived a dive off the top of a cabinet in our review and came out unscathed).

The $300 off deal applies to all three storage sizes, the 128GB, 256GB, and 512GB options. If you’ve been eyeing Samsung’s flagship premium Android, with all the features power users could need, this is a good time to buy.