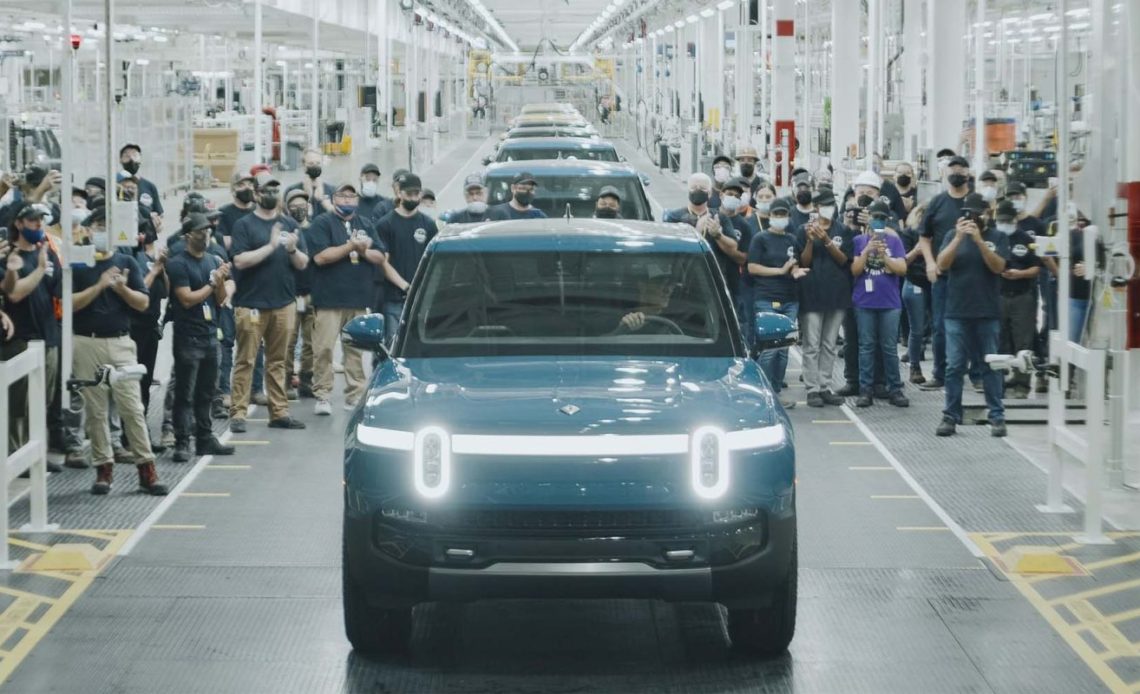 A Tweet by Rivian CEO RJ Scaringe shared a pivotal moment for the nascent EV automaker as its first R1T pickup destined for a customer rolled off the production line today. Images show a large group of Rivian’s staff at its Normal, IL facility cheering on the flagship EV completing assembly ahead of customer deliveries this month.

Rivian is an American EV manufacturer on the absolute cusp of delivering its first passenger EV to customers with the R1T pickup. Previously, Rivian has struck deals with companies like Amazon to provide commercial EVs to support deliveries.

With the backing of other major US companies like Ford, Rivian has been able to garner around $10 billion in investments over the last decade.

With the R1T beginning deliveries this month, followed by the R1S SUV later this year, Rivian is poised to make a splash in the EV market ahead of its recently announced IPO valued at $80 billion.

With “Launch Edition” versions of its two flagship EVs on the way this year and two more trims of each planned for this coming January, Rivian is gaining some serious momentum.

With today’s news shared by the company’s CEO, Rivian moves another step closer to hitting US roads with the R1T.

In a Tweet today from Rivian CEO RJ Scaringe, the automaker celebrated its first R1T pickup destined for an actual customer rolling off the production line.

After months of building pre-production vehicles, this morning our first customer vehicle drove off our production line in Normal!  Our team’s collective efforts have made this moment possible. Can’t wait to get these into the hands of our customers!

With the announcement, Rivian customers fortunate enough to snag a reservation of the Launch Edition R1T could soon be seeing the new EV in their driveway.

Depending on where the customer lives, the vehicles may make a pit stop at one of Rivian’s latest pre-delivery centers for a final inspection.

Still, R1T customers should be seeing first deliveries in the coming weeks with the Launch Edition of the R1S to follow later this year.

According to Rivian’s website, two additional trims of each EV model (Adventure and Explore packages) are still scheduled to begin deliveries in January of 2022.