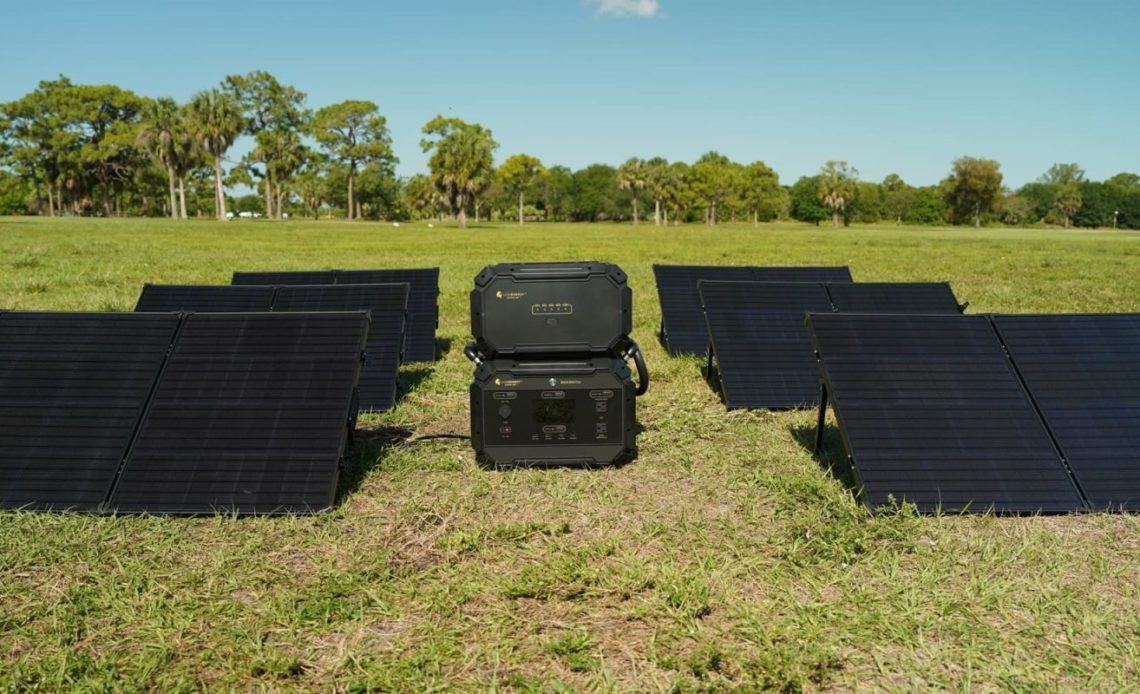 I recently had the chance to test out the Lion Energy Safari ME portable power station along with the massive battery expansion pack and solar panel package. I don’t say this lightly: This is THE high-capacity portable power station I’d want to bring with me to an off-grid cabin, campsite, or even to have in my garage in case of a natural disaster.

Having lived through nearly a week of Hurricane Irma-induced power blackout after taking a direct eye hit in September 2017, I have a certain appreciation for off-grid power generation.

At the time I charged up all the electric bike batteries I had on hand in the hours before the storm hit and jury-rigged a golf cart DC-DC converter to a 12VDC to 110VAC inverter to pull useful 110V power from the batteries.

But those e-bike batteries only lasted me a day and a half of sparing use, including keeping the box fans on low power setting (did I mention Florida in late summer?). The rest of the week was a hot and miserable mess until power was finally restored.

If I could go back and do one thing differently, it would be to have a time machine and bring the Lion Safari ME kit with me. Because this thing is basically everything you need to live like a king whether during a power outage or thriving miles away from the nearest electric lines.

The main part of the system is the Lion Safari ME itself. This is the fully self-contained power station, which includes a 922 Wh battery and a 2 kW AC inverter that can put out 4 kW of peak power. There are also a couple beefy grab handles on the unit, which make it easy (or easier) to lug the 45 lb (20 kg) device around.

It gives you two 110VAC outlets that are tied into its pure sine wave inverter, plus you get two USB-A ports, two USB-C PD ports (one for 18W and one for 60W), a 12V cigarette lighter outlet (rated up to 15A DC), and a 12V Anderson Powerpole outlet (rated up to 25A DC) for whatever 12V devices you want to power.

Each output has its own power switch to turn it on or off (saving power when not using certain outputs) and there’s a main power switch. There’s also a color screen that lets you know what’s going on in the unit.

So far everything is looking great, though I would have loved to see another couple 110V AC outlets. Two outlets seems a bit low, though of course you could also plug in a power strip.

While everything so far has been pretty standard among power stations, now it’s time to buckle up because we’re heading into uncharted territory. I’ve tested a pile of these power stations, but the Lion Safari ME has some very cool features that I haven’t seen on others yet.

First of all, there’s no charging brick to keep track of (or to lose). The AC charger for juicing up the device from your wall outlet is built into the power station itself. You just pull the AC plug out the back and jam it into your wall outlet. Done.

It’s also a super fast charger, filling the device in under and hour and a half! If you forgot to top it up and suddenly you get word of a tornado warning, you could conceivably have the thing fully charged before the first two-by-four comes through your living room window.

The unit is also built with LiFePO4 battery cells to give it a longevity rating of at least 2,000 cycles instead of the typical 500-800 cycles of Li-ion cells used in most other power stations.

Next, there’s a massive port on the back, which leads me to the next coolest part of this kit: the ME-XP expansion unit.

This expansion unit is sized to fit right on top of the main Safari ME between the carry handles and adds 2,048 Wh to give you a total of around 3 kWh of stored capacity.

The connector cable is built into the back of the XP, which sticks with the theme of including everything as connected hardware so you don’t misplace or lose bits and pieces of the kit.

There’s even a recess to store the chunky cable in the back when you don’t have the two units connected. That makes it easier to store against the back wall or your garage or in a closet, since the anaconda-thick cord won’t hang out of the back. They really thought of everything here.

With 3,000 Wh of combined capacity between the two units, you could run the necessities in your home for a full day or more, and you probably have way more capacity than you’d need for a typical off-grid cabin.

But I’m not even done yet, because the whole thing can be recharged with up to six solar panels daisy chained together.

Lion Energy’s 24V 100W solar panels are pre-wired to work with the kit (though you could plug them into anything that accepts a 24V solar panel, if you just wanted the solar panels themselves).

They have their own neoprene carrying case to protect them, and they use double-walled aluminum construction instead of the plastic housing I’ve seen in every other portable folding solar panel I’ve tested.

These panels are way more rugged than I’m used to, with full locking metal closures and a folding metal handle to make them easy to carry. The panels even have adjustable-angle aluminum support arms so you can get the exact angle you want to optimize the solar power generation of the panels. Most other companies have plastic support arms that don’t let you change the angle of the panels, and it’s quite obvious to me that the build quality of these panels is far and above anything else I’ve tested.

With a maximum of six panels connected together, the panels recharge at up to 600W of power. That would fuel up the main Safari ME unit in less than two hours or the combined Safari ME and ME-XP expansion unit together in less than six hours. In other words, a full day of sun would keep you always topped up with the ability to provide 4,000 watts of peak power and 3,000 Wh of energy at your fingertips. And since the unit can do well over 2,000 cycles, you could even use it for your primary, everyday solar energy device for years and years in an off-grid cabin scenario before you’d even begin to make a dent in its capacity.

There are even subtle design notes that are just great common sense inclusions, like the handle design on both units. The heavy boxes have nice big handles for a good grip, but they both remain either spread far apart or actually fold flat so you can still place other gear on top of the units. Many other power stations have molded handles in the top that prevent you from using the top as an impromptu table or prep surface. I love that Lion Energy doesn’t rob you a flat place to rest a book or a hammer or a (tightly closed) water bottle. The handles on the bottom unit are also still accessible when the expansion pack is sitting on top. The two boxes weigh 90 lb (42 kg) together, so carrying them piggyback style isn’t fun, but I could still pick them up and waddle them around like a heavy water bucket without needing to separate them thanks to the handles remaining accessible on the lower unit. That’s some nice design forethought.

I try not to be hyperbolic, but this is absolutely one of the best high-power and high-capacity solar power generators I’ve tested to date. The only real downside is this the price. You’ve got to pay for all of this convenience and quality construction, and you’ll pay handsomely.

The main Safari ME base station is priced at $2,349. If you add the expansion pack, the pair will cost you $3,995. Then there are those high-quality solar panels that are priced at $299 each. However, we’re told by Lion Energy that using our Electrek links above will apply an automatic 15% discount to the price, which worked when I tested them.

It is fair to say that in terms of dollar per watt hour on the power station or dollar per watt on the solar panels, this certainly is not the best bang for your buck. But then again, it isn’t meant to be.

There are cheaper ways to get energy storage or solar power. The Lion Energy system isn’t designed to be cheaper. It’s designed be better, as in more convenient to use and with higher build quality. It works better, lasts longer, and is probably even cheaper in the long run when you factor in the significantly longer cycle life. But up front, oh man, that’s a lot of dough to fork over!