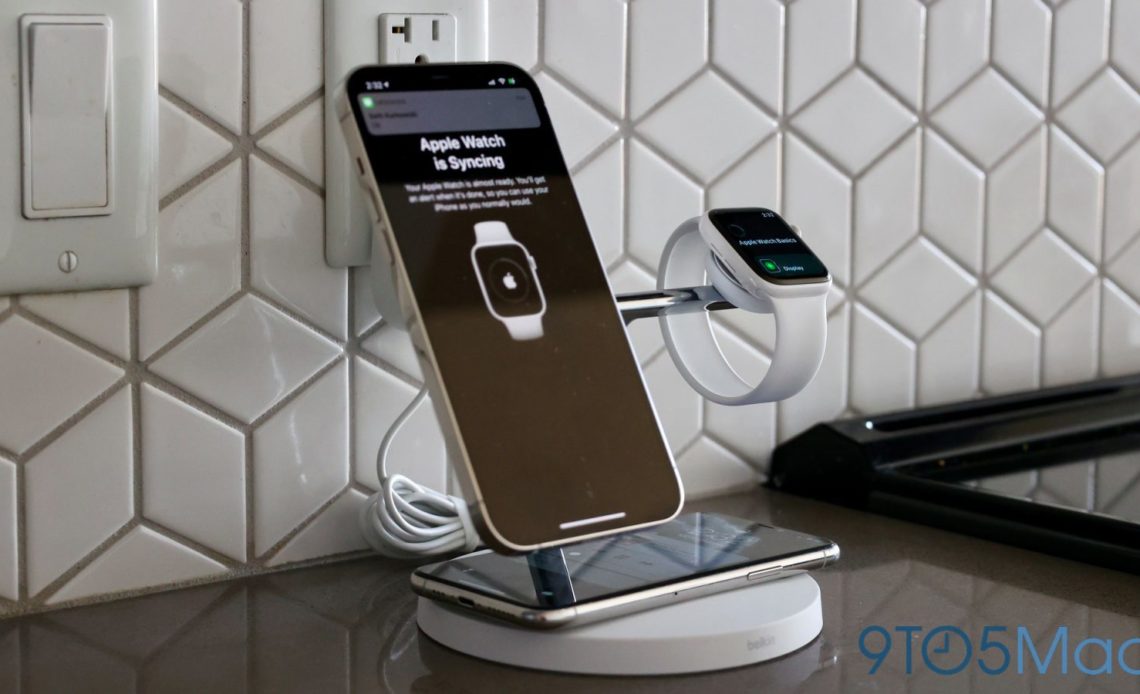 Belkin’s Boost Charge Pro with MagSafe and Apple’s MagSafe Duo chargers take very different approaches to solve a similar problem. In a world where everything has to be recharged, combination chargers that can reduce cables and plugs in our life are really practical. While Apple’s first-party combo charger is described best as a minimalistic travel charger, Belkin aces utility in what may be the best MagSafe combo charger.

Belkin Boost Charge Pro 3-in-1 Wireless Charger with MagSafe (that’s the full product name) turns one outlet into three wireless charging stations. While this has been done before with combination charging stands, the innovation with this product is using Apple’s new MagSafe technology.

Apple built magnets into the iPhone 12 family of phones, and this system called MagSafe wirelessly charges with up to 15W power delivery. Standard Qi chargers top out at 7.5W when used with iPhones. The secret to MagSafe is magnetically guaranteeing precise alignment between wireless charging coils. MagSafe is also a practical solution for creating a “hovering” stand as Belkin Boost Charge Pro does.

While I imagine many will use Boost Charge Pro as a nightstand charger, the “hover” design of the MagSafe side makes the charging station a great kitchen accessory too. The iPhone 12 magnetically attaches to the MagSafe charger and works in either portrait or landscape orientation. The slightly tilted back angle is great for charging your iPhone while using FaceTime and making dinner.

Belkin Boost Charge Pro retails for $149.99 and includes a power brick in the box.

I’m as enthusiastic about any new Apple product as the next person, but it’s no secret that Apple’s MagSafe Duo accessory is overpriced and under ambitious. While I’m a MagSafe Duo customer, I can best describe the accessory as a luxury travel charger.

Apple’s combination wireless charger is half iPhone 12 charger and half Apple Watch charger. While the iPhone must charge flat on a surface, the Apple Watch charging puck can lay flat or upright to easily charge open or closed band watches.

There’s no third charging pad, but you can use the MagSafe half to recharge any wireless charging accessory including AirPods and older iPhones — just not while charging your iPhone 12. The Apple Watch half can only charge Apple Watches. If you’re really in a pinch to power up a Lightning port-based device, you can unplug the USB-C to Lightning cable and charge directly with the wall.

While I much prefer the minimalist design of MagSafe Duo, the utility just isn’t there for it to be my primary charging station for my iPhone and Apple Watch. It touts a much smaller footprint and folds like a book for portability, but it’s no good for wireless charging your iPhone while using it — something even Apple’s standard MagSafe charger accomplishes.

MagSafe Duo retails for $129 and does not come with the required $19 20W USB-C power adapter.

9to5Mac will have a closer look at this accessory soon, but here are a few quick thoughts from me after testing:

Finally, the most lackluster part of a generally cool product for me is how the product mounts. As its name implies, Car Vent Mount Pro relies on attaching to your car’s vent system to hold the mount in place.

The manual suggests using the top part of the vent and not a vent blade due to the grip required to hold the mount in place, but my 2017 Honda Civic (a really common car) vent top was too thick to hold the clip. At the risk of damaging a vent blade, I attached the clip to the part that the manual says to avoid.

It works, and the iPhone gets really cool if you run your A/C, but I imagine the opposite is true if you need to run the heat. This is true of all vent mounts, of course, and my car has a built-in screen with CarPlay so this isn’t actually a product I need. Prior to having CarPlay, however, I could see myself appreciating the convenience of MagSafe and really enjoying this product despite the downsides.

My recommendation would be whole-hearted if a future version managed to incorporate passthrough charging from a Lightning cable. That feature alone would be more worthy of the ‘Pro’ moniker in the product name, and perhaps it could join the ranks of best MagSafe chargers.

As it stands, I do have a surprise use case for Car Vent Mount Pro. After testing Belkin’s mount in my car for a few days (the iPhone only fell to the floor once when I hit a curb on accident), I moved the Car Vent Mount Pro to my desk where it now doubles as an iPhone prop. The clip side adjusts to support any orientation which makes it ideal for holding up your iPhone 12 while watching a video or making a video call — just remember that it doesn’t charge the phone.