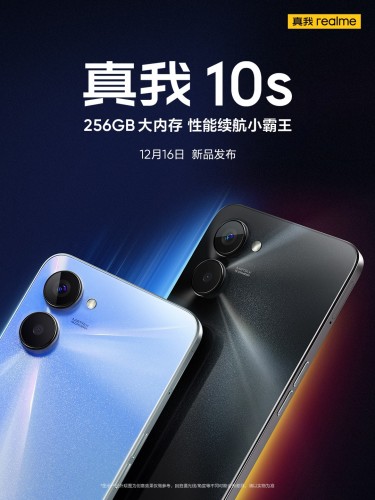 The poster shared by Realme reveals the Realme 10s will come in at least two colors. The smartphone has a flat back cover sporting two cameras, joined by an LED flash. It looks similar to Realme 10 4G, but upon close inspection, you can see it has different text – “50MP AI Camera” on the 10 4G and “Matrix AI Camera” on the 10s.

The picture also reveals the Realme 10s has the volume buttons and SIM card slot on the left-side frame, meaning the power button is on the right side. Although it’s unclear if it will be embedded with a fingerprint reader like the 4G and 5G versions of the vanilla model and the 10 Pro (Pro+ comes with an in-display solution).

Realme has confirmed that the Realme 10s will come with 256GB of storage and long battery life. Chances are it will pack a 5,000 mAh cell.

Realme hasn’t detailed the specs sheet of the Realme 10s, but there’s not much waiting to know more about its specs, price, and availability since the unveiling is set for tomorrow.