QuantumScape update: Solid-state cells will cut EV charging time in half and increase volumetric density over 50% 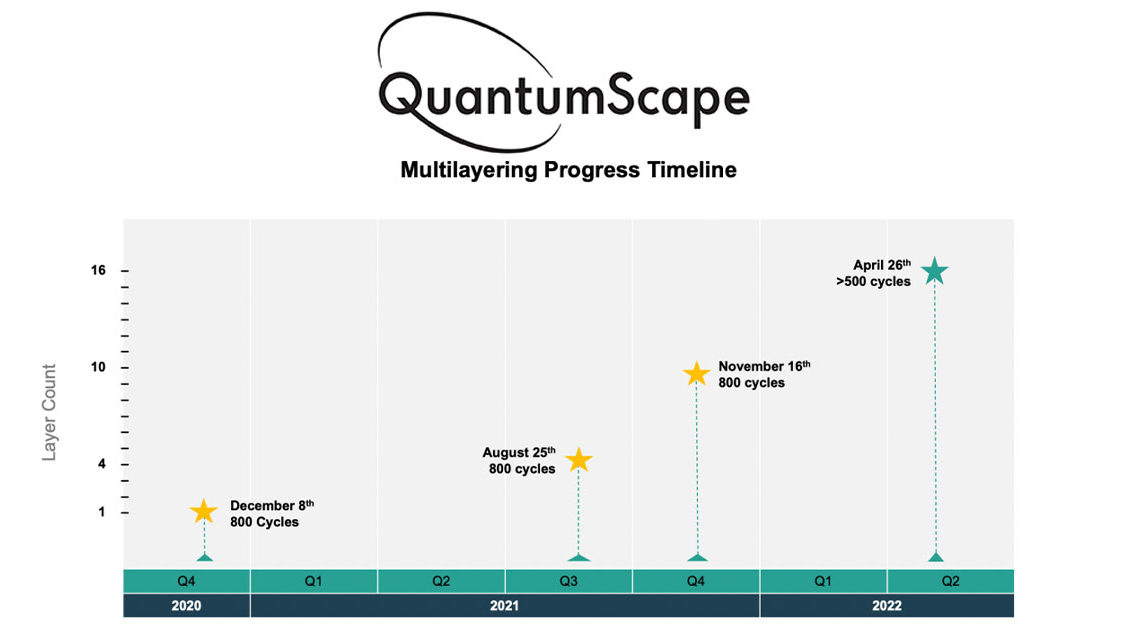 In a letter to shareholders outlining its progress through Q1 of 2022, solid-state battery manufacturer QuantumScape has shared some exciting updates. These include a new 16-layer, solid-state cell – an initial proof of concept of the company’s proprietary cell format. Additionally, QuantumScape shared news of scaled manufacturing and plans for increased production capacity. There’s lots to unfold here, so let’s hop in.

QuantumScape ($QS) is a battery technology company founded in 2010 with the goal of developing scalable, effective solid-state batteries.

In December of 2020, the battery developer announced it had reached a “major breakthrough” in its technology by utilizing a ceramic separator, leading to the successful testing of single-layer prototype cells. After doubling the size of its initial pilot manufacturing line, Quantumscape revealed it had also developed a 10-layer cell.

In February, QuantumScape shared another industry first with a single-layer cell that completed 400 consecutive 15-minute fast-charge cycles, replenishing from 10% to 80% capacity while still retaining over 80% of its initial energy.

In its latest Q1 letter to shareholders, QuantumScape has continued its momentum with a bunch of additional solid-state updates.

The following information was taken from QuantumScape’s quarterly letter to shareholders recapping Q1 of 2022. The details can be rather … dense, so we recommend checking out the full letter for yourself, but here are some of the key takeaways.

Continuing its trend of developing and testing multi-layered cells that perform under the company’s “gold standard” conditions, QuantumScape shared that it has developed a 16-layer solid-state battery cell that has already endured over 500 charge cycles. So far, the cell’s energy retention and cycling have behaved similarly to the cells that came before it (see graphic above).

In addition to containing more layers, this new cell is the first to showcase QuantumScape’s proprietary cell architecture, which is flexible enough to support an anode-free format. The company describes this initial cell as “an encouraging proof of concept” for the flexible format but admits much work still needs to be done before it can truly be commercialized.

QuantumScape also offered updates to the scale of its operations, including a ramping up of separator production – a key goal for 2022 to reach weekly starts over 8,000. This past quarter, the company recorded average weekly starts over 3,700, up from 2,000 in Q4 of 2021.

This increase was made possible by QuantumScape’s updates to production tooling on its Phase 1 engineering line. Speaking of which, the battery developer also shared a detailed strategy of its initial scaling of production capacity. It consists of three planned phases:

We can explain the rest, but QuantumScape offers its own production line updates best:

In Q2, we aim to complete production qualification for the majority of the tooling for the Phase 2 engineering line, including automated cell assembly tools, ultrasonic welders and cell testing systems. We continue to target delivery of A-sample cells to at least one customer in 2022. The A sample is planned to have dozens of layers and is intended to demonstrate the core functionality of the battery cells.

QuantumScape can offer updates to battery power and energy

In the letter, QuantumScape admits it does not believe it’s possible to improve both the power and energy of battery cells simultaneously given their current chemistry. However, its solid-state lithium-metal technology offers the potential to improve both. Not just simultaneously, but dramatically (see graph above).

According to QuantumScape, it has five consumer sampling agreements, three of which are with top-10 automotive OEMs, one of which has already reserved at least 5 MWh of capacity on the QS-0 pre-production line. Here’s another update as it pertains to automakers actually testing solid-state batteries:

We have shipped multiple generations of cells to various customers across automotive and other applications. In Q1, our 10-layer cells were successfully tested by one automotive customer and entered the testing phase with another. These intermediate steps represent concrete progress toward our goal of shipping A sample cells in 2022.

We know that one of those automakers is Porsche, which is owned by Volkswagen Group, an early funder of QuantumScape. The rest of the letter is financials, which aren’t too important right now as the company’s products are still very much in the developmental phase.

These are big goals for QuantumScape for 2022, but its latest updates provide evidence that the company continues to scale and improve its solid-state battery technology. Until next quarter!