Pixel Watch vs. Galaxy Watch 5: Which is the better Wear OS watch? [Video] 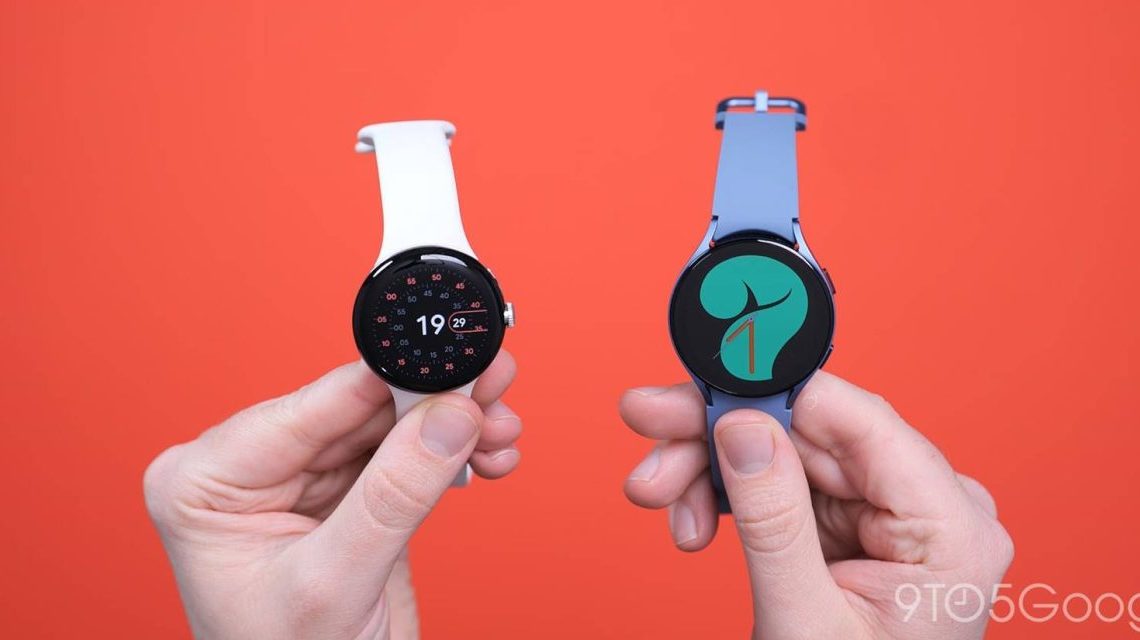 2022 — and by extension 2023 — is a big year for Wear OS with Google entering the market with the Pixel Watch, but how does it stack up against the market-leading Galaxy Watch 5? Here’s everything you need to know.

There is a lot separating the Galaxy Watch 5 and the Pixel Watch, not least the fit and finish. One major upside is that the duo both adopt “traditional” circular watch shapes and are what we’d describe as minimal in their respective chassis designs.

Google only has one size option and if you don’t like small wearables, then the 41mm torso might not be to your taste. Samsung offers the Galaxy Watch 5 in a smaller 40mm and larger 44mm option. We’ve compared the 44mm model to the Pixel Watch, and the difference is quite stark. That said, the Samsung watch looks “normal,” while the Google wearable looks positively small on most wrists.

If you have ever used the Galaxy Watch 4, the Watch 5 will be familiar. While circular, it’s boxy, angular and has a completely flat display. Meanwhile, the Pixel Watch is rounded, bubbly, and has a button-like aesthetic that feels more fashion-oriented; which you feel is better looking will depend upon your own personal preferences.

One major downside to the curvy Pixel Watch is that the display edges are fully exposed. This means that a drop or clash with a surface or object could be disastrous. Gorilla Glass 5 is fairly strong, but it won’t protect from major trauma. The aluminum chassis and flat Sapphire Glass screen of the Galaxy Watch 5 should fair better. You can scuff and dent the metal frame, but it should withstand more use and abuse by virtue of this design difference.

Because of the stainless steel build, the Pixel Watch is actually heavier than both Galaxy Watch 5 models. The difference is a few grams but that might be noticeable to you. The watch strap mechanism with the default Galaxy Watch band is more familiar, too, while the Pixel Watch uses a Fitbit-style band that clasps with a push-pin system. The usage of a proprietary connector means that bands are few and far between right now.

Samsung stuck with a standard pin connector. This allows you to use all manner of cheap bands and watch straps. Add in the wider array of colors and the Galaxy Watch 5 has an undoubted edge if you want to combine colors, styles, and more.

Interestingly, the Pixel Watch and Galaxy Watch 5 displays can reach a maximum 1,000-nit peak brightness. That is perfect for outdoor viewing but is very rarely active at this brightness level. What’s immediately evident is how well the Pixel Watch hides the sizeable bezels compared to the Galaxy Watch; each AMOLED is high resolution and looks great given the small size, but the Samsung smartwatch has the edge with a higher manual brightness level.

It’s no contest when we compare the lifespan of the Pixel Watch to the 44mm Galaxy Watch 5. However, the smaller 40mm option has a slightly smaller 284mAh internal cell that has a similar lifespan to the Pixel Watch. If you care about battery life, the 44m Watch 5 is capable of 36 hours on a single charge, compared to the Pixel Watch’s 24 hours best-case scenario.

One notable right out of the gate with the Pixel Watch that is exponentially better is the pairing process. Google Fast Pair is supported, which instantly recognizes that your wearable is ready to link with an Android device. This makes the process seamless on any Android phone that has access to Google Play Services. You still need to download the dedicated Pixel Watch application, but this is a quick and easy setup procedure with handholding along the way.

The process of linking the Galaxy Watch 5 to a non-Samsung phone is not seamless. Using the dedicated Wear OS app if fraught with issues. Downloading the Galaxy Wearable app requires a plugin for the Watch 5, too. It’s by no means difficult, it’s just less intuitive and can be frustrating with pairing failures quite common in our experience. If you use a Samsung Galaxy phone, the process is infinitely better. You’ll get a Fast Pair-style pop-up that allows you to instantly initiate wearable linking.

Both smartwatches run the very latest Wear OS 3.5. Google’s vision of this is clean, lightweight, and feels like an extension of the Pixel smartphone series. Samsung’s iteration is quite heavily modified. Some of this is beneficial. The app drawer is more visually appealing and Settings menus have handy hyperlinks to sections you may find useful.

Notifications are handled far better on Pixel Watch, making a scrollable list easier to manage and sift through — especially with the rotating crown. There is also the bonus of double the onboard storage. 32GB allows you to download and access more offline content like podcasts, music, and other files. At no point does the 16GB allowance on the Galaxy Watch feel like it needs to be expanded in our experience.

Google Assistant integration is baked into both, and the processing seems a little faster on the Pixel Watch, but it’s pretty much neck-and-neck in our testing. Disabling the “Hey Google” activation is certainly something we’d suggest for an expanded lifespan on both wearables.

The addition of Fitbit to the Pixel Watch is not quite what it probably should be. As it stands, it’s a nice but confusing addition that feels more tacked on than it should. You can track a number of workouts, and it’s a huge step up over the rudimentary Google Fit suite. Data is held within the Fitbit application on your phone, but historical data and in-depth metrics are held hostage behind a $9.99 per month Fitbit Premium subscription.

Samsung has made a few minor tweaks to BioActive Sensor on the Galaxy Watch 5 over its predecessor. The sensor is now larger and should make better contact with your skin resulting in more accurate readings and, therefore, fitness data tracking. To access this information you’ll be heading into the Samsung Health application, which is similar to the Fitbit application in layout and functionality. It does hold historical data without a fee though.

Overall, fitness tracking is far better catered for on the Galaxy Watch. The auto-tracking means that workouts a less likely to be missed and the wealth of modes exceeds the Pixel Watch. If you want all health tracking functionality, sadly, some of this is locked to Samsung Galaxy phones. ECG readings are available to all Android users with the Pixel Watch, but not on the Galaxy Watch 5. While the Galaxy Watch 5 has more sensors including a temperature sensor, if you can’t use some of these functions without a Samsung phone, it becomes harder to recommend.

Sleep tracking and heart rate measurements are available on both watches. The Samsung Galaxy Watch 5 does have the ability to check Body Composition too along with on-device snore detection when sleeping. Neither of these options exists on the Pixel Watch.

Pixel Watch vs. Galaxy Watch 5: Which is the right choice for you?

If you look at the raw specifications and hardware, it’s hard to suggest that anyone choose the Pixel Watch over the Galaxy Watch 5. Samsung’s wearable has several key advantages including better battery life, a more durable design, plus multiple size options to purchase.

It’s not all in Samsung’s favor here, though. The Pixel Watch impresses with its simplicity and ability to be used with any Android phone without losing out on features. Samsung’s annoying limit locks functions to those with a Galaxy smartphone. That means even if you choose the smartwatch, you’ll miss out on things like ECG functionality and more.

Where the Galaxy Watch 5 really shines is in its price. It’s far cheaper and will likely last longer because it has a more capable chipset and a longer support window. Add in longer fitness data records without subscriptions plus a wider potential array of health modes and the scales tip heavily in favor of Samsung’s wearable.

The Pixel Watch is being sold as a premium wearable, and it certainly looks the part. When compared directly to the competition, it becomes a harder sell, but still a solid companion nonetheless. Google may have put up a solid first smartwatch, but the sad fact is that the best Wear OS watch crown still belongs to Samsung.

Where can I get the best deal on the Galaxy Watch 5 or Pixel Watch?

The Google Pixel Watch retails for $349 and can be purchased direct from the Google Store, Amazon, Best Buy, and more.