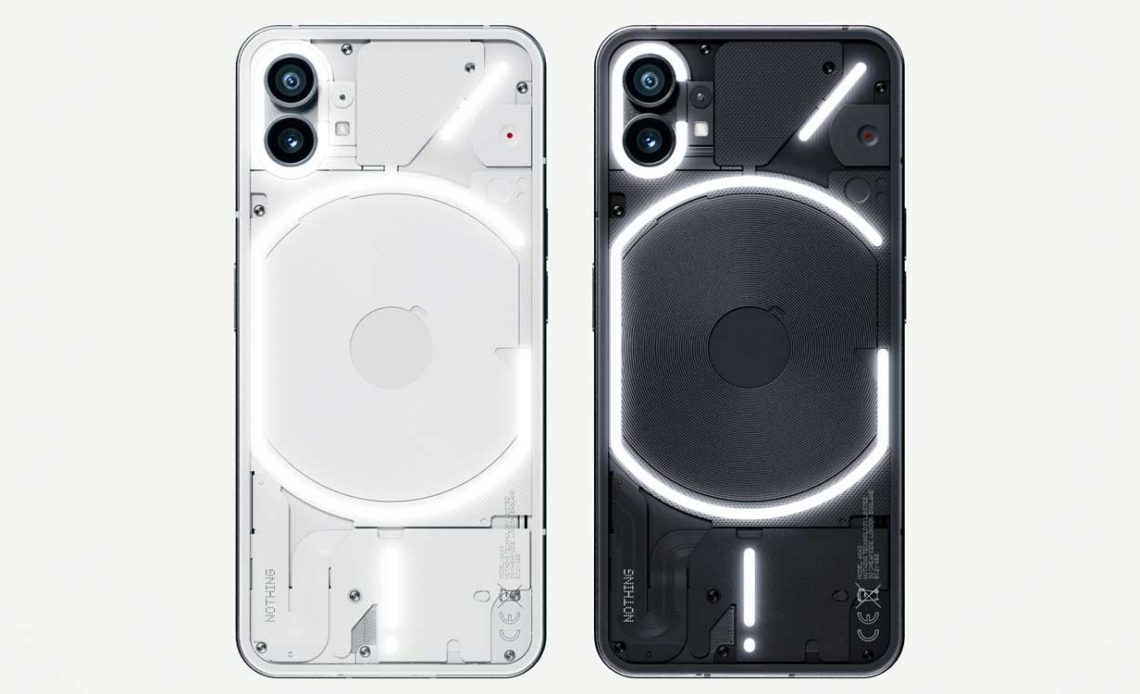 Some years on since its inception, Carl Pei’s Nothing has released its very first smartphone: The Android-powered Nothing Phone (1).

The London-based firm’s first handset offers a reasonably impressive spec sheet given its more affordable entry point. However, it is the design that is the most eye-catching aspect of this 6.55-inch Android as it carries over the transparent design hallmarks of last year’s ear (1) earbuds.

From afar, the Nothing Phone (1) certainly looks like the iPhone 12/13 series but it has dual glass panels but manages an IP53 water and dust resistance rating. The rear of which contains a unique transparent design and “Glyph” lighting bars. The LED strips are paired with the software and react to notification and status changes on your device such as a charge meter, while some level of customization is also offered.

At the front, the Nothing Phone (1) features a 120Hz OLED display with 10-bit 2,400 x 1080-pixel resolution at 402ppi. It has a fairly modest 500 nit maximum brightness and 1,200 nit peak brightness for improved outdoor use. The Nothing Phone (1) display also houses an in-display optical fingerprint scanner and has uniform bezels around all sides. Software-based Face Unlock is also available, which is also will work when wearing a face covering such as a surgical mask.

Under the hood, this is a mid-ranger through and through. The Nothing Phone (1) uses a slightly altered Qualcomm Snapdragon 778G+ to allow for wireless charging support. That is paired with either 8/12GB RAM and 128/256GB non-expandable UFS 3.1 storage.

At the rear, the Nothing Phone (1) camera setup consists of a 50-megapixel Sony IMX 766 main sensor and 50-megapixel Samsung ISOCELL JN1 ultra-wide with 114-degree FOV. OIS (optical image stabilization) is offered on the main sensor, while EIS (electronic image stabilization) is offered on both sensors. While using the rear cameras, the Glyph lighting can be used as a fill light rather than the LED flash. The selfie camera is the 16-megapixel rated Sony IMX 471 sensor.

Camera software modes include Portrait mode, Night mode, Panorama Night mode, Night Video, and Expert modes. Nothing has stated that the dual-camera setup was tuned using the 10-bit display, to ensure that images look as true to what is seen through the viewfinder as possible. Video recording modes are capped at 4K 30fps on the dual rear setup, while the selfie camera can record up to 1080p at 30fps. The Night Video mode is capped at 1080p at 30fps.

A 4,500mAh battery has been utilized which supports 33W PD3.0 wired fast charging but is limited to chargers compatible with Quick Charge 4.0. Qi wireless charging is available at 15W. Reverse wireless charging for earbuds and other accessories is capped at 5W. It is worth noting that the Nothing Phone (1) will not come with an in-the-box charger but a USB-C to USB-C cable is supplied.

The Nothing Phone (1) ships with Nothing OS atop Android 12. This lightweight launcher includes a number of minor tweaks to the version of Android often associated with Google’s Pixel smartphone lineup. Nothing has promised three years of Android OS updates and four years of bi-monthly security patches for its first device.

Nothing is backed by GV (formerly Google Ventures) and has partnerships with chipmaker Qualcomm which led to a unique version of the Snapdragon 778G+ for the Phone (1).