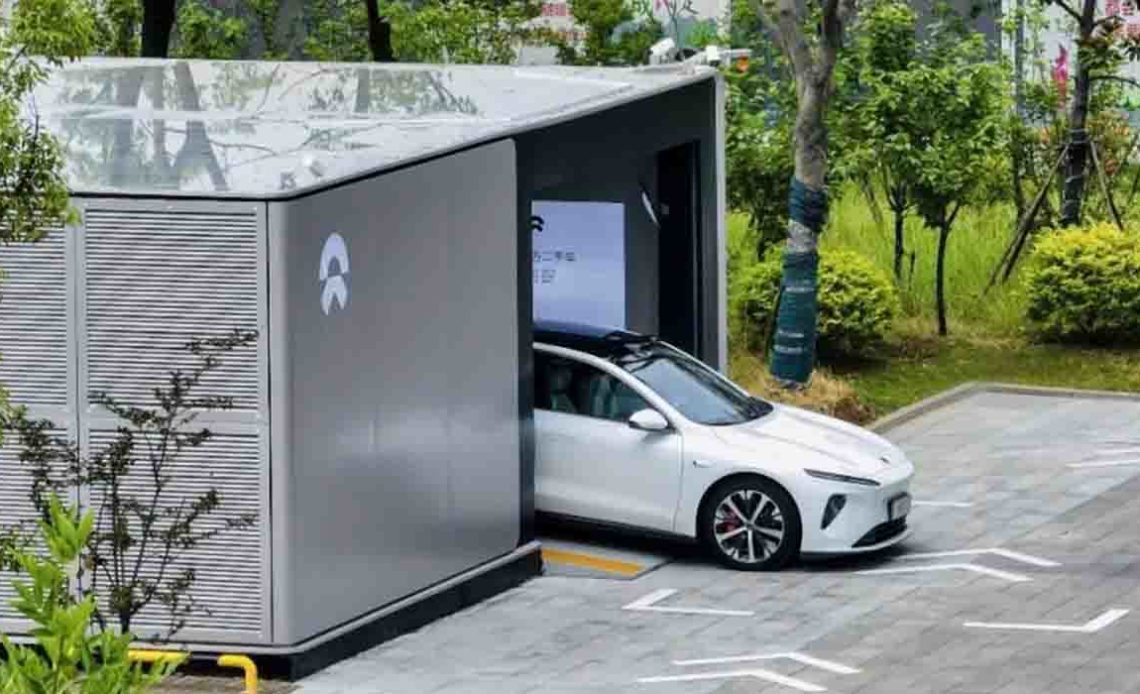 Chinese EV automaker NIO has already rooted its flag in the soil of Europe, yet is still merely getting started with its plans to expand beyond its home turf. The company’s president recently shared that NIO plans to offer battery lease programs and a huge expansion of available swap stations as a strategy to entice more EU customers and gain a larger chunk of the growing EV market overseas.

NIO is a Chinese technology company specializing in premium EVs that is now starting to expand outside of China into new markets in Europe. In addition to providing an all-electric range of SUVs and sedans, NIO remains at the forefront of implementing battery swap technology to support its EVs.

The automaker currently has over 1,000 swap stations in China alone and has begun implementing them in its newer markets. It may one day license the technology to other automakers as well. It recently announced its third-generation of stations have the ability to store energy and send it back to their respective electrical grids.

In Europe, NIO is already selling and delivering EVs in Norway and expanding sales to Germany this year. Furthermore, it has already shared additional expansion plans following the first shipments of its ET7 sedan overseas:

NIO ET7 set sail in Europe, and will be open for booking and delivery in Germany, the Netherlands, Denmark, Sweden, and Norway, providing more European users with a complete service system and enjoying a pleasant lifestyle.

As NIO expands its footprint in the EU, it looks to compete with local legends like Mercedes-Benz and BMW, but it has a unique strategy in place it hopes will set it apart from its EV competitors.

According to a recent report from Reuters, NIO is hoping to grab a larger share of the EV market in Europe by offering consumers lower pricing by way of battery lease programs, supported by an expanded network of EV battery swap stations.

According to NIO president and co-founder, Qin Lihong, the automaker is planning to erect 1,000 battery swap stations outside of China over the next three years, most of which will be in Europe to support its expansion of EV sales to markets like Germany and beyond.

Over the past year, NIO has been testing its battery leasing and swap station business in Norway with its ES8 SUV – its first model to be sold outside of China. NIO says it has sold 800 ES8s so far but has only installed two swap stations. Nearly all customers in Norway opted for battery leasing.

As a foreign company trying to compete with some European automakers approaching their centennials of existence, NIO wants to keep costs down so consumers give them a fair look. Regardless of this uphill battle for brand recognition, Qin remains confident in NIO’s technology:

We are comprehensively ahead of our competitors in terms of products and services. It’s true there will be more EV models to be launched in Europe in three years, but we are also making more progress.

Qin stated that NIO’s first overseas plant opened in Hungary this week and will manufacture battery swap stations for the European market since shipping them from China is too costly. If NIO can get sufficient battery swap infrastructure in place in Europe, it could offer a huge selling point to EU consumers, as they do not have to purchase a costly EV battery, are guaranteed a fully charged battery at every swap, and are back on the road significantly quicker than a stop at a charging pile, even if its a DC fast charger.

Lastly, Qin shared that part of NIO’s strategy for Europe includes a search for a partner that specializes in asset management to finance the ownership of batteries for leasing to EU customers, especially as those customers inevitably grow with its planned market expansion.

Next, NIO will begin rolling out its ET7 and ET5 sedans to Europe as it continues to build out its network of battery swap stations. Look out for Mercedes, BMW, and VW, because NIO’s president says it already has a lead in technology and is coming for you on your home turf:

It’s just like two runners on their tracks. If you have a great lead, you just need to keep your own pace.