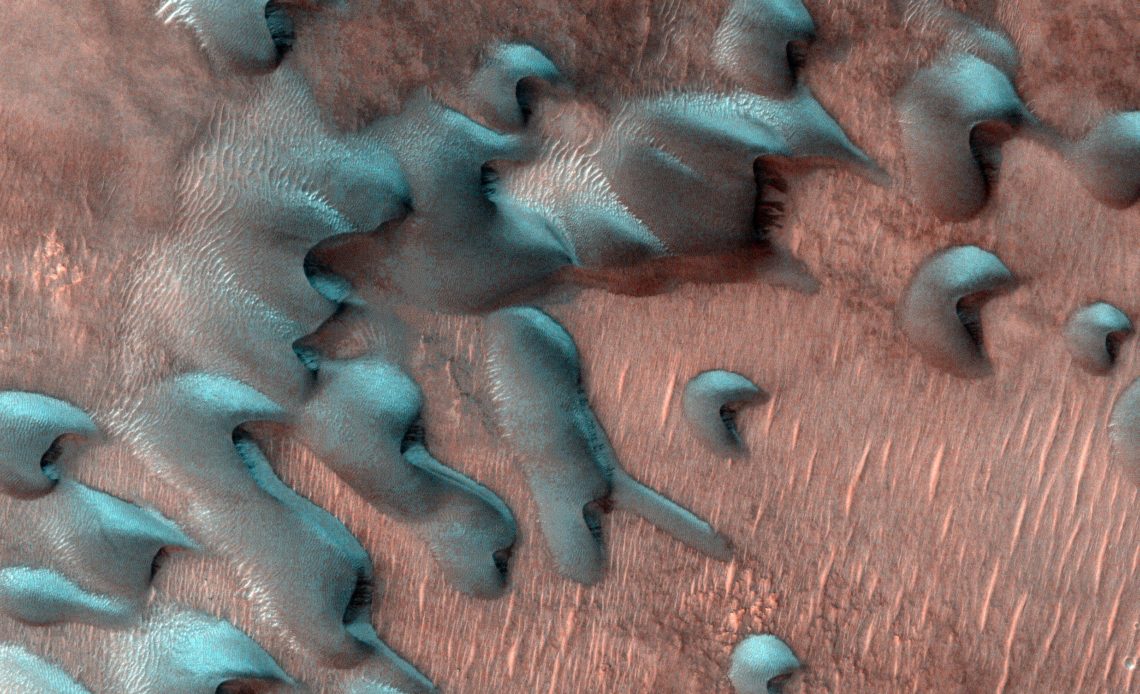 When winter comes to Mars, the surface is transformed into a truly otherworldly holiday scene. Snow, ice, and frost accompany the season’s sub-zero temperatures. Some of the coldest of these occur at the planet’s poles, where it gets as low as minus 190 degrees Fahrenheit (minus 123 degrees Celsius).

Cold as it is, don’t expect snow drifts worthy of the Rocky Mountains. No region of Mars gets more than a few feet of snow, most of which falls over extremely flat areas. And the Red Planet’s elliptical orbit means it takes many more months for winter to come around: a single Mars year is around two Earth years.

Still, the planet offers unique winter phenomena that scientists have been able to study, thanks to NASA’s robotic Mars explorers. Here are a few of the things they’ve discovered:

Martian snow comes in two varieties: water ice and carbon dioxide, or dry ice. Because Martian air is so thin and the temperatures so cold, water-ice snow sublimates, or becomes a gas, before it even touches the ground. Dry-ice snow actually does reach the ground.

“Enough falls that you could snowshoe across it,” said Sylvain Piqueux, a Mars scientist at NASA’s Jet Propulsion Laboratory in Southern California whose research includes a variety of winter phenomena. “If you were looking for skiing, though, you’d have to go into a crater or cliffside, where snow could build up on a sloped surface.”

How We Know It Snows

Snow occurs only at the coldest extremes of Mars: at the poles, under cloud cover, and at night. Cameras on orbiting spacecraft can’t see through those clouds, and surface missions can’t survive in the extreme cold. As a result, no images of falling snow have ever been captured. But scientists know it happens, thanks to a few special science instruments.

NASA’s Mars Reconnaissance Orbiter can peer through cloud cover using its Mars Climate Sounder instrument, which detects light in wavelengths imperceptible to the human eye. That ability has allowed scientists to detect carbon dioxide snow falling to the ground. And in 2008, NASA sent the Phoenix lander within 1,000 miles (about 1,600 kilometers) of Mars’ north pole, where it used a laser instrument to detect water-ice snow falling to the surface.

Because of how water molecules bond together when they freeze, snowflakes on Earth have six sides. The same principle applies to all crystals: The way in which atoms arrange themselves determines a crystal’s shape. In the case of carbon dioxide, molecules in dry ice always bond in forms of four when frozen.

Jack Frost Nipping at Your Rover

Water and carbon dioxide can each form frost on Mars, and both types of frost appear far more widely across the planet than snow does. The Viking landers saw water frost when they studied Mars in the 1970s, while NASA’s Odyssey orbiter has observed frost forming and sublimating away in the morning Sun.

Perhaps the most fabulous discovery comes at the end of winter, when all the ice that built up begins to “thaw” and sublimate into the atmosphere. As it does so, this ice takes on bizarre and beautiful shapes that have reminded scientists of spiders, Dalmatian spots, fried eggs, and Swiss cheese.

This “thawing” also causes geysers to erupt: Translucent ice allows sunlight to heat up gas underneath it, and that gas eventually bursts out, sending fans of dust onto the surface. Scientists have actually begun to study these fans as a way to learn more about which way Martian winds are blowing.