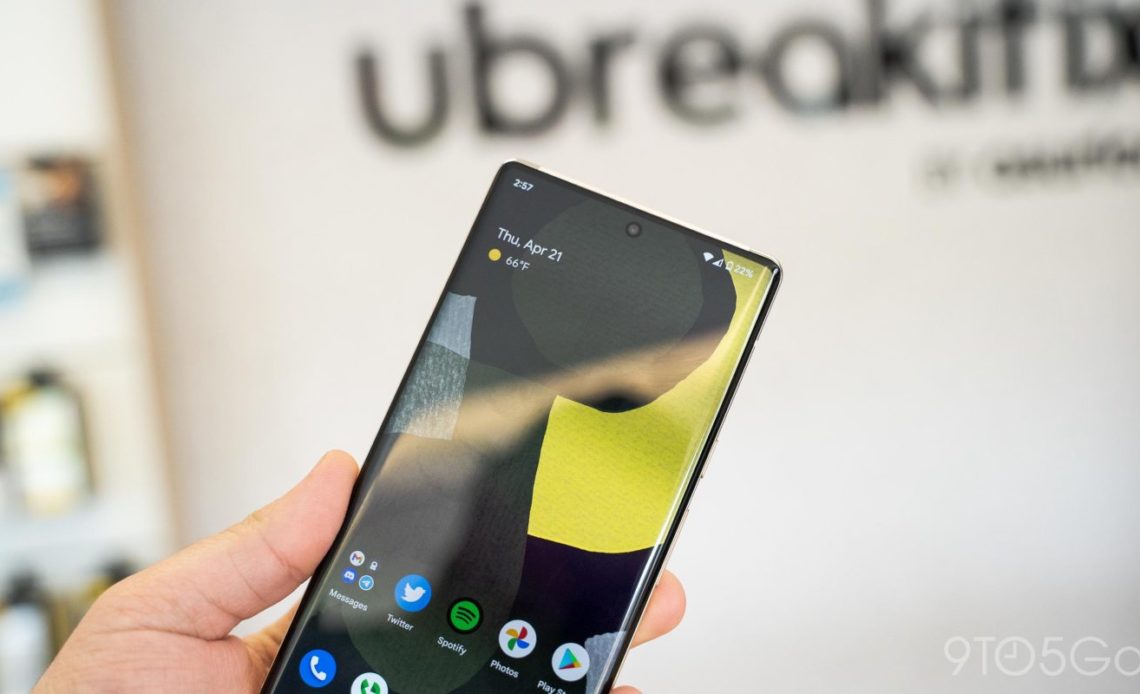 “Are you breaking stuff over there?” my wife said, seconds after my phone hit the ground. Sadly, though, I was. My Pixel 6 Pro’s display was dead and, for the first time in years, it was time to figure out the cost and time it would take to repair my daily driver. Here’s how that went.

Wrapped up in a case and Whitestone screen protector, I figured my Pixel 6 Pro would easily survive a drop from a small side table down around three feet to my wood floors, as it has a few times before. But somehow, this time was the exception. Turning on my screen revealed that there were no cracks or other signs of physical damage, but that the underlying display panel had died. The majority of the display went black, with only a small sign of life in the top left corner, and a black streak emanating from the selfie camera. It was left unusable.

As weird of a situation as it was, the next obvious step way to get a repair on the books. My first thought, of course, was to get a repair going with Google directly. However, because I didn’t have Preferred Care on my Pixel 6 Pro, I figured any repair would very likely be out of warranty, and through Google, that would probably mean swapping out the device entirely and waiting on shipping. I quickly came to the conclusion that it would be faster and probably easier to just do an in-person repair. Still, I decided to do a quick chat with Google Support to explore my options.

That chat went pretty well, with the representative taking my information and a picture of the display to offer some troubleshooting. The first suggestion was to perform a factory reset, which I found odd, but that turned out to be something I couldn’t actually do as I couldn’t even get the phone to fully power off. A few more exchanges later, and it was agreed that a repair would indeed be needed. I was offered the option to do a mail-in repair or a walk-in through Google’s partners. The chat also offered a glimmer of hope that the repair might be covered under my warranty.

As I had figured out earlier, an in-person repair seemed ideal. So, I went to uBreakiFix to schedule an appointment at my local shop which, notably, just opened up in my hometown in the past couple of years. Google has partnered with uBreakiFix since the original Pixel, but the two-hour drive to my nearest location previously made it not very useful.

Of course, I still didn’t know for sure if my repair would be covered by Google’s warranty or if I’d be shelling out for the full cost of a Pixel 6 Pro screen repair. At one time, uBreakiFix conveniently offered price ranges when setting up an appointment, but that’s no longer offered.

Getting to the uBreakiFix location, I explained to the employee what happened and mentioned that Google had hinted in-warranty coverage might be possible. He took a look, mentioning how this sort of display damage isn’t uncommon. He then got a second opinion from another employee that also thought it might be covered under the warranty.

When all was said and done, this damage did end up being covered. But your results may vary.

Had I not been covered under warranty, I was told that a screen repair would have cost $280 for the Pixel 6 Pro, while the regular Pixel 6 would have been $200. That’s not awful, but also not a charge anyone wants to have unexpectedly thrown at them.

Just a few hours after I’d dropped off the phone, I received a text saying that it was repaired and ready to go. When I arrived at the store, the new display was in perfect working order and the fingerprint sensor was too. After a quick conversation about the initial damage, look at the old panel, and a signature later, I was on my way. The employees at this store in particular were pleasant and impressively versed on Pixel issues in particular.

The last time I had to get a Pixel repaired, it was not fun. I was without my main phone for a few days waiting on shipping, and the replacement unit ended up being defective. Years before that, our former staffer Justin Duino reported on a nightmarish experience trying to get his original Pixel repaired not long after launch. And those two instances were not alone. It doesn’t take much to find horror stories stemming from Pixel repairs over on Reddit.

But clearly, Google has made progress. There’s a process that works, and it can work very well. Your results may vary by location, of course.

Google still has a long way to go to match the ease of getting an iPhone repaired. One can hope that the rise of Google-owned stores and the continued expansion of the company’s partners will only improve this process going forward. Plus, Google is improving your DIY options for getting a Pixel fixed. Just this month, the company announced a partnership with iFixit which will bring detailed guides and easy-to-buy parts to fix a Pixel at home.

It’s nice to know that getting a Pixel fixed isn’t as hard as it used to be.

This post was in no way sponsored by Google or uBreakiFix, and neither company was made aware of our intent to have this device repaired ahead of contacting support channels.