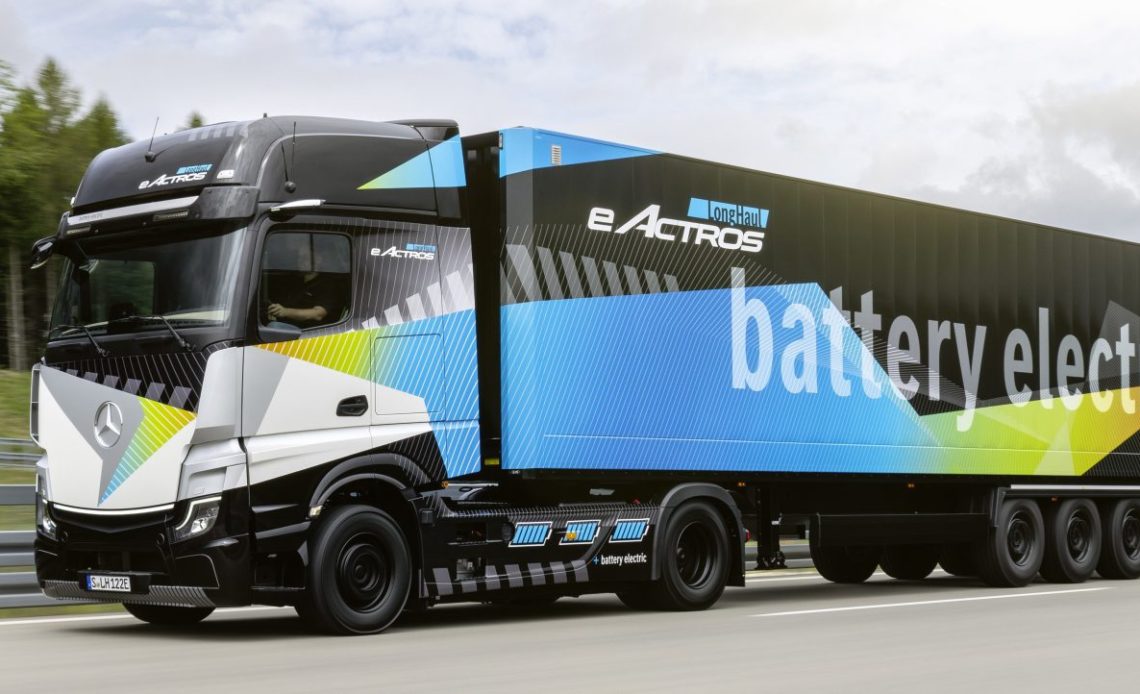 Mercedes-Benz Trucks has unveiled its longest-range electric truck yet at IAA this weekend: the eActros LongHaul.

Daimler Trucks, the commercial truck division of the German automaker that includes many brands like Mercedes-Benz Trucks and Freightliner, has been a leader in electrification with a growing portfolio of battery-electric trucks.

In 2020, Mercedes-Benz announced the eActros LongHaul, a new longer-range version of the eActros.

At IAA this weekend, the automaker unveiled the eActros LongHaul for the first time and released more specs.

Daimler has confirmed that it is equipped with three battery packs for a total capacity of “over 600 kWh”:

The eActros LongHaul presented at IAA provides a preview of the design language of the production vehicle with its clear contours and an LED light strip in the front area. Mercedes-Benz Trucks has also announced additional information on the eActros LongHaul series. Three battery packs provide an installed total capacity of over 600 kWh and two electric motors, as part of a new e-axle, generate a continuous output of 400 kW and a peak output of over 600 kW.

The company is talking about a range of “around 500 km” on a single charge. That’s about 310 miles. Mercedes-Benz didn’t confirm if that was with a full load, but we assume it’s the case.

The batteries used in the eActros LongHaul employ lithium-iron phosphate cell technology (LFP). These are characterized, above all, by a long service life and more usable energy.

While it might lose some energy density with the LFP cells resulting in a shorter range than say the Tesla Semi with 500 miles, Mercedes says it is gaining in longevity.

In addition to the tractor unit, Mercedes-Benz Trucks will also produce rigid variants of the eActros LongHaul right at market launch. This will offer customers numerous other possible use cases in fully electric transport. Development engineers at Mercedes-Benz Trucks are designing the eActros LongHaul so that the vehicle and its components meet the same durability requirements as a comparable conventional heavy long-distance Actros. That means 1.2 million kilometers on the road over a period of ten years.

Mercedes also notes that the truck’s battery pack can be charged from 20 to 80% in “well under 30 minutes” when using a charging station with an output of “about one megawatt.”

The eActros LongHaul will be built at Mercedes-Benz Trucks’ existing assembly line at the Wörth truck plant. The first prototypes are already undergoing testing and new “near-production prototypes” are going to be tested in real-world use cases by customers next year.

Volume production is planned for 2024.

Along with the eActros LongHaul, Mercedes-Benz Trucks announced a new variant of the eActros, eActros 300, which is equipped with three packs, with each about 112 kWh of energy capacity. It enables a range of “up to 220 km,” or about 137 miles on a single charge.

This new version will be available in the second half of 2023.