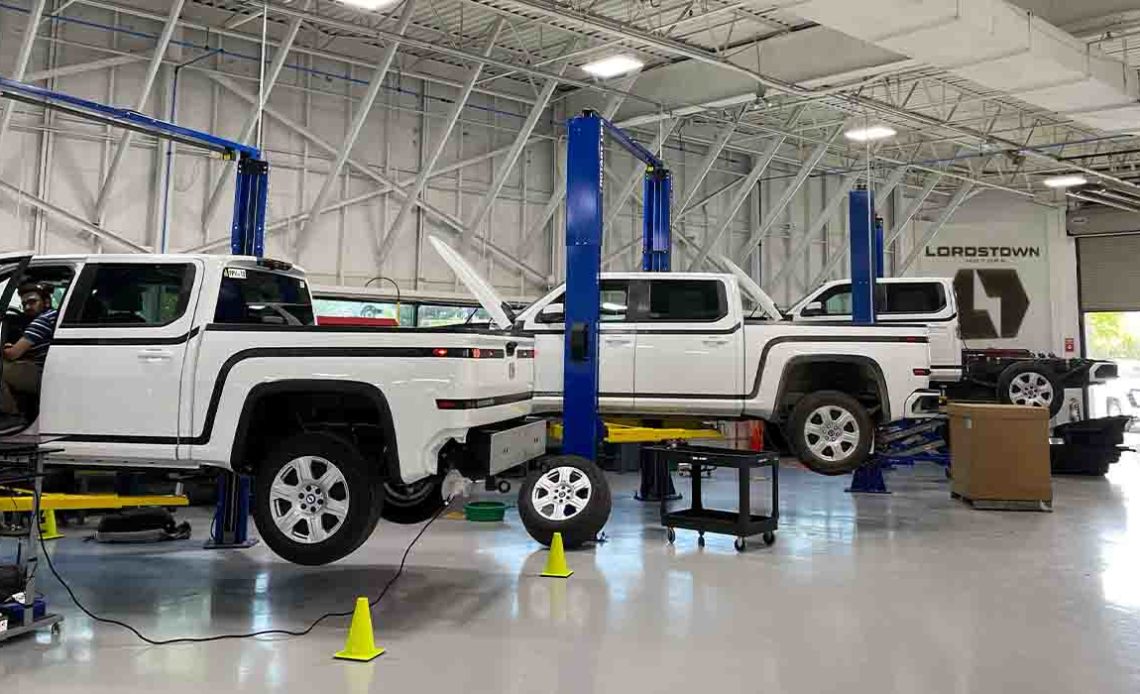 Back in an unassuming corner near the exit of the ACT Expo at the Long Beach convention center sits a black Lordstown Motors Endurance pickup. As at least two ACT attendees asked questions about the prototype, its manufacturers were publicly announcing the official sale of its assembly plant. Lordstown Motors has officially closed its deal with Foxconn, who will now build the former’s Endurance pickup under a new joint venture (JV) and manufacturing contract.

Behold the next chapter in the epic of Lordstown, Ohio, where an EV automaker stuck its flag in the ground and declared tremendous early success in the form of 100k pre-orders, only to tumble from “serious contender” to “oh yeah, I forgot about them.”

The first crack in Lordstown’s armor came when an Endurance prototype caught fire in March of 2021. This publicity put a keener focus on a damning report by notorious short seller Hindenberg Research, calling into question the veracity of the orders Lordstown execs were touting.

A month later, the Endurance pickup’s integrity was called into question again after the Lordstown team bowed out of the San Felipe 250 race after just forty miles. By June, the company’s CEO and CFO resigned amidst the questioning of orders, while its clever PR team spun the transition as a leadership change as the Endurance trucks entered commercialization.

Here we are nearly a year later, with little progress to share. That’s where Foxconn comes in as a potential savior to a down and out Lordstown Motors. Last November, Lordstown announced plans to sell its Ohio assembly plant to Foxconn – a Chinese manufacturer that has successfully built vehicles – with hopes it can step in and get the Endurance over the finish line.

Following months of negotiations and paperwork, the closing of the sale is complete and Lordstown Motors has entered into a joint venture with Foxconn to finally (hopefully) get those Ohio assembly lines humming.

Lordstown completes sale to Foxconn to finish what it started

The closing of the asset purchase agreement was announced by Lordstown Motors ($RIDE) in a press release outlining the terms of the deal. The official sale of the Ohio plant once owned by GM will send $230 million to Lordstown, plus a reimbursement of about $27 million in operating and expansion costs dating back to last September.

In return, Foxconn will take over the Ohio assembly plant and will build the Endurance BEV pickups under a manufacturing contract signed by Lordstown Motors. According to Lordstown, there will be no interruptions to the progress of the Endurance as Foxconn takes the reigns. The 400 current Lordstown employees will trade in their company badges and join the Foxconn family.

Additionally, both companies have formed a joint venture called MIH EV Design, LLC and will co-develop future EV products using Foxconn’s open-source Mobility-in-Harmony (MIH) platform. To get the new JV rolling, Foxconn is investing an additional $100 million while floating Lordstown Motors another $45 million to fill its capital commitment to the venture.

The closing of the Foxconn APA and the completion of a joint venture agreement for the development of new electric vehicles using Foxconn’s MIH platform are important milestones for LMC. Our strategic partnership with Foxconn provides LMC with a flexible and less capital-intensive business model, access to broad supply chain and software capabilities and an effective vehicle development platform to bring EVs to market faster and more efficiently.  I have always been a strong believer in what Foxconn is doing to accelerate the adoption of electric vehicles and we are proud to be their partner.

The commencement of commercial production for the Endurance pickup is targeted for Q3, with initial deliveries expected in Q4.

At its very core, this entire process has had have been a humbling one for Lordstown Motors, while providing other prospective startups and OEMs a parable on what not to do. Foxconn arrives as the true hero of this tale and has the expertise, infrastructure, and most importantly capital, to lift this once celebrated pickup out of obscurity and onto roads.

Its a win-win in my opinion. Lordstown gets the capital to actually (probably) live to see its first-born reach commercial production, while Foxconn cleans up on its revenues. If I were a young startup or OEM, I’d consider designing the EV myself and leave the scaled manufacturing to the pros. A strategy Fisker has adopted that appears to finally work in its favor.

Perhaps, slowly but surely, the hype train for the Endurance pickup starts to creak forward back into relevance thanks to Foxconn. The way this industry is moving, the all-electric pickup will arrive in a completely different EV landscape than it would have last year, with EV pickups already in driveways and several more on the way from some big OEMs.

The next question will be, “how does the Endurance compare?” Let’s subtly hold our breath as we approach SOP and hope to see more “show” soon. Based in the company’s history outlined above, we can’t just go off the “tell” anymore.