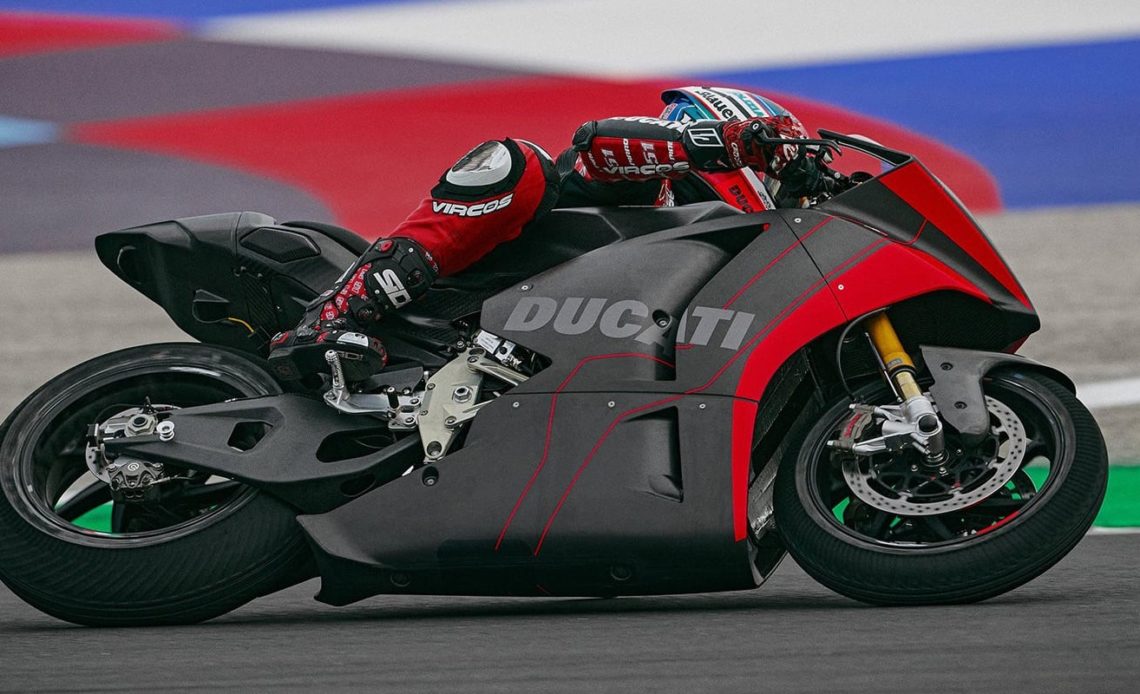 The newly released video from Ducati follows four long months after the company first showed us images of the Ducati V21L prototype.

Back in December of last year, the electric motorcycle prototype performed a number of laps on the Misano World Circuit Marco Simoncelli track without any of us getting an up close look.

That changes now thanks to a new promotional video that gives our first good look at the bike performing some hot laps with a highly trained rider atop and showing off Ducati’s own unique motor and chain sound for the electric motorcycle.

You can check out the video below.

[UPDATE: aaaand it’s gone. Ducati turned the video to “private” on its official YouTube channel shortly after this article was written. We’ll re-update if they give us the video back. Or you can check here to see if it’s back.]

That was confirmed earlier this year by Ducati North America CEO Jason Chinnock.

We don’t have any hard specs yet on how the Ducati V21L may perform, but we have a good idea of what the company’s benchmark is.

The motorcycle that Ducati will attempt to replace was the Energica Ego Corsa, which was known to hit speeds of up to 160 mph (257 km/h) during races.

Energica outfitted the bike with a 110 kW (147 hp) liquid-cooled electric motor helping lay down 220 Nm of torque. So Ducati certainly knowns the numbers to beat.

Ducati’s fully-faired V21L electric racing motorcycle doesn’t provide many glimpses of the technology underneath the panels. We are able to spot a single-speed setup with a chain drive running in line with the swingarm pivot, helping to give a few clues about the drivetrain. But the larger powertrain remains a mystery as the battery pack is hidden away from view.

The battery pack has been cited by Ducati before as the main reason they were previously unable to build electric motorcycles, despite companies like Energica seemingly having figured it out years earlier.

It now appears that Ducati has found the solution (and for its part, Energica has indicated that Ducati reverse engineered some tech from Energica’s bikes), with the proof being in the pudding as Ducati’s bike flies on the track.

We’ll be back with more info as soon as Ducati is ready to spill the beans on exactly what is going on under the panels of its first electric motorcycle.