Listen up, electric bike companies. You need to give your e-bike batteries USB-C charging, stat! 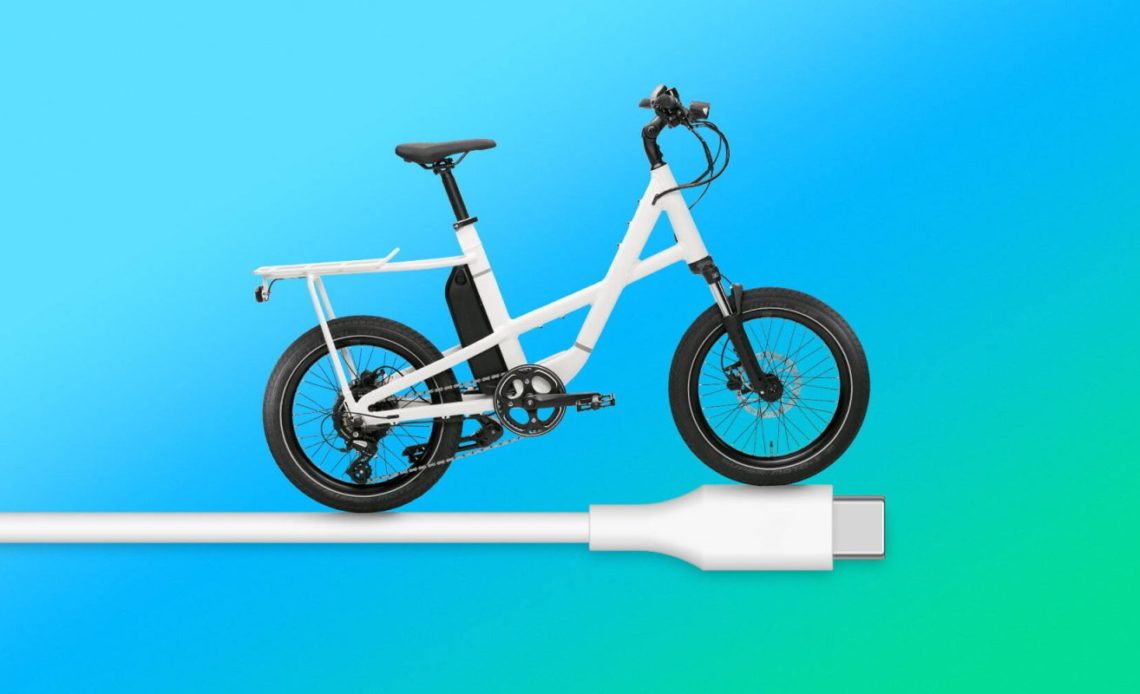 If you’ve owned an electric bike, e-scooter, or other personal mobility device (and especially if you’ve owned more than one), you know they all have a charger that pretty much fits nothing else you own. I have several electric bikes, scooters, skateboards, and other e-rideables, and almost none of them can share chargers. But don’t fret! There’s already a convenient solution here, and it’s called USB-C. Electric bike battery USB-C charging needs to become a thing.

So listen up, electric bike companies. This one’s for you.

We’ve seen this problem before

Remember a decade ago when every cell phone had a different charger? USB saved the day (or at least, micro USB did), finally ridding our kitchen junk drawers of the handful of various DC barrel plug chargers that were turning into a rat’s nest of e-waste.

Well thanks a lot, e-bike companies, because you’ve brought us right back to the dark ages with electric bike battery chargers.

Every e-bike has a different charger, and it’s even worse than the cell phone days because not only do they all have different connectors, but they also have different voltages. And using the wrong charger with the wrong voltage significantly raises the stakes of having a very, very bad day should the Battery Management System (BMS) ever fail.

Sure, there’s been some slight standardization with the 5.5 x 2.1mm DC barrel connector finding its way onto a plurality of batteries, though definitely not a majority. There are at least five or six common connectors across the industry, then more than a dozen less common options. If you stop by a friend’s house and want to borrow their charger to juice up while you’re there, the chances of being able to add a nickel to their electrical bill are incredibly low unless you’ve got the same model of e-bike.

The answer to this madness is simple though: the common, convenient, and powerful USB-C connector. Specifically USB-PD, or power delivery. Electric bike battery USB-C charging could be closer than you think.

The same USB-C charger that we already plug into our laptops could conceivably charge our electric bikes and electric scooters.

It could even do so decently fast. Until a year or two ago, USB-C could handle 100W. That’s more powerful than most electric scooter chargers and approximately equal to the power level of a basic 2A e-bike charger that comes with most electric bikes.

But last year the USB-PD Revision 3.1 increased the power potential of the protocol to a whopping 240 watts!

That’s as powerful as pretty much any e-bike charger you’ll find today, and it’s more than enough to make me and the rest of the electric bike community happy.

But you don’t even have to get fancy with the new higher power protocol for a fast charger. Even the old 100W protocol would be more than enough for us! We’d be spraining our wrists patting you on the back so hard for giving us simple 100W USB-C charging.

And it’s not even that hard. Seriously, I’ll help you out. Take your e-bike battery. Add a DC-DC converter to bump up from 20V to 54.6V (or whatever your battery voltage is). Connect it to a USB-C PD port. Done. Go play Xbox or something.

Many e-bike batteries already have a USB-A port on them for charging your phone. Give me a bidirectional USB-C port on my battery so I can charge my laptop or any other device from it. Boom, you’ve just made a portable power station out of your e-bike battery! Watch out, Jackery, the e-bike industry is coming for you!

OK, squeeze in closer here folks. I want to tell you a secret while the e-bike company CEOs are busy checking with their team to see if this is really as simple as I just described. We only have a few minutes until they come back.

There’s a simple reason they haven’t done this yet. The e-bike companies haven’t given us USB-C charging because most of them don’t design or build their own batteries. Most e-bike batteries are entirely designed and assembled in a Chinese factory, then purchased à la carte by the e-bike companies for installation on their e-bikes.

Some companies have actually taken the leap to doing partial assembly of their packs in the US, so there are exceptions. But by and large, they’re mostly all pre-built batteries that are chosen from an OEM’s catalog. They may be specced with the cells and the wiring and whatever other components an e-bike company wants, but it’s all menu items. There’s not a ton of original design going into these things.

That can change though. Money talks. And big e-bike companies have a lot of it laying around right now. With their buying power, they can force a Chinese battery maker’s hand and demand USB-C charging for their e-bike batteries. And they should. Do you know how many headlines that would grab?!

I’m not even saying USB-C needs to be the only charging option. Give me a 100W USB-C port on a battery and leave your DC barrel plug there too – I don’t care. Sell me a 200W fast charger that uses your own port, that’s fine. I might even buy it for times that I want to charge even faster. But I’m not going to carry that bulky fast charger around with me and that’s the whole point. I need a charger plug that I can find just about anywhere. And when you’re in a group of people these days, at least one of them is bound to have a USB-C charger.

OK, I have a confession to make. This isn’t quite as simple as I made it seem earlier.

It’s close, but there’s a bit more to it. You do really only need to add one small part to an e-bike battery: a USB-based DC-DC converter with a USB-C PD port.

But there are other issues here. You need to mitigate the heat from that converter with a heat sink. You need to isolate the converter. You need to weatherproof the connector. There’s a bit of work here.

But this is all pretty darn simple stuff. And Chinese electrical engineers are good. Like, really good. They designed most of the electronics you’re using every day. This is child’s play for them. They can have a USB-C e-bike battery finished in an afternoon.

All it takes is a push.

So what do we need? An X-Prize? Fine. Consider this me establishing the Micah USB-C E-Bike Charging X Prize. Or whatever. The first company to put an e-bike with USB-C charging in my hands wins. I don’t know what the prize is. How about $50 to the charity of your choice? Or a video of me riding your e-bike down the road in a pink tutu? Heck, I’ll do both.

Or whatever you want. Whatever it takes. Name your prize and get to work. Because this needed to happen, like, yesterday.