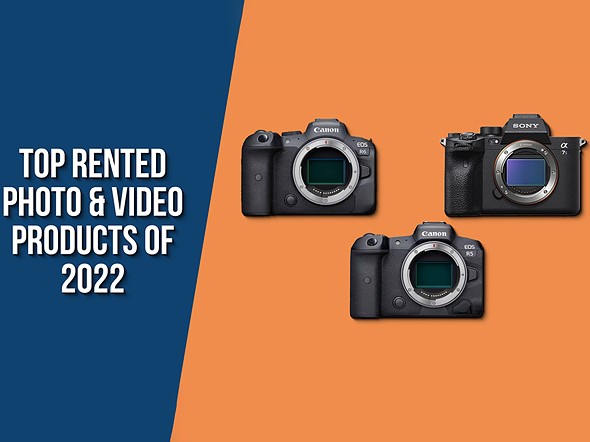 Lensrentals has published its breakdown of the top rented cameras and lenses of 2022. Like last year, the list is dominated by Canon and Sony, although the market share percentages for each have shifted in favor of Sony.

Looking first at the most popular photography and videography gear rentals of 2022, there aren’t many surprises. The top 20 list, which includes cameras and lenses, is jam-packed with Canon and Sony gear, with only the RED Komodo 6K video camera at #19 breaking up the Canon and Sony dominance. The story is remarkably similar to last year’s, when just a single product (The EF-mount version of Blackmagic’s Pocket Cinema Camera 6K) bucked the Canon and Sony trend.

More interesting is looking at what specific gear topped the list in 2022. 2021’s top five was the Canon EOS R5, Canon 5D Mark IV, Canon 24-70mm F2.8L II, Canon EOS R6 and the Sony a7S III, respectively. As you can see, this year’s top five sees the R6 and a7S III moving up the list, while the Canon 24-70mm F2.8L II and Canon 5D Mark IV have dropped to the bottom half of the top 10. There’s a theme we’ll see throughout this article that shows itself here – reduced interest in DSLR cameras and lenses. That isn’t surprising, but seeing it fleshed out in Lensrentals’ report is informative.

We see more evidence of reduced interest in DSLR gear when looking at fourth place, Nikon F, which has an 8.6% rental share, a 2.3 percentage point reduction compared to last year. Canon EF and Nikon F have the biggest decreases year over year, while Sony E and Canon RF have the largest increases. Of particular note, while Canon RF picked up about half of the Canon EF loss, Nikon Z made up less than a quarter of the Nikon F mount dip.

Considering lens brand, it’s no surprise that Canon continues to reign supreme. While it has decreased from 38.8% to 37.3%, it still maintains a huge lead over Sony (19.1%) thanks to weakened but still strong Canon EF demand and growing Canon RF demand. Sigma, which makes DSLR and mirrorless lenses for just about every lens mount, comes in at the third position, with Nikon, Zeiss, and Fujifilm rounding out the top 6. By far, the best year-over-year performance goes to Sony, which saw its market share increase by 3.5 percentage points.

Given the 20 most-rented gear chart at the top, it’ll come as no shock that Canon and Sony led the way in the camera brand market share charts, with 35.8% and 31.1% of the camera brand market shares, respectively. Those are massive numbers, far eclipsing Blackmagic in the third position with 5.8%. Nikon, Panasonic, Leica and Fujifilm follow, ranging from 5.3% to 3.2%.

Although Canon took the largest hit from 2021 to 2022, it still maintains a powerful position and garners the most consumer interest. However, it wouldn’t be shocking to see the trend reverse somewhat as Canon continues to flesh out its EOS R camera lineup and RF lens system. It will also be interesting to see how Nikon and Panasonic perform in 2023, given that Nikon is busily expanding its mirrorless Z system while Panasonic seems to be putting more eggs in the video basket, especially with its Micro Four Thirds system. Things have been quiet on the full-frame S system front for Panasonic. That could certainly change in 2023.

On the topic of video, it’s worth considering the emphasis on video in the top 20 most-rented gear list. The Canon EOS C70 cinema camera (RF mount) cracked the top five, and the Sony FX3 full-frame cinema camera featured in the top 10. We also see the Sony FX6 and FX9 in the second half of the list, alongside the RED Komodo 6K cinema camera. Compare that to 2021, when not a single video-first camera made the top 11. While there were cinema cameras featured, including the Canon EOS C300 Mark II Dual Pixel (EF), EOS C70 (RF) and EOS C200 (EF), in the overall list, they were far from the top. Of course, you can capture brilliant video with cameras like the Canon EOS R5 and Sony a7S III, but it’s interesting to see cinema-oriented cameras moving up the list in 2022.

To read Lensrentals’ analysis of its 2022 results, head to the Lensrentals blog. If you want to try out new cameras or lenses, browse the massive Lensrentals selection. The company also rents out drones and many accessories, including audio equipment and lighting. Speaking of lighting, it saw a sizable spike in popularity in 2022.