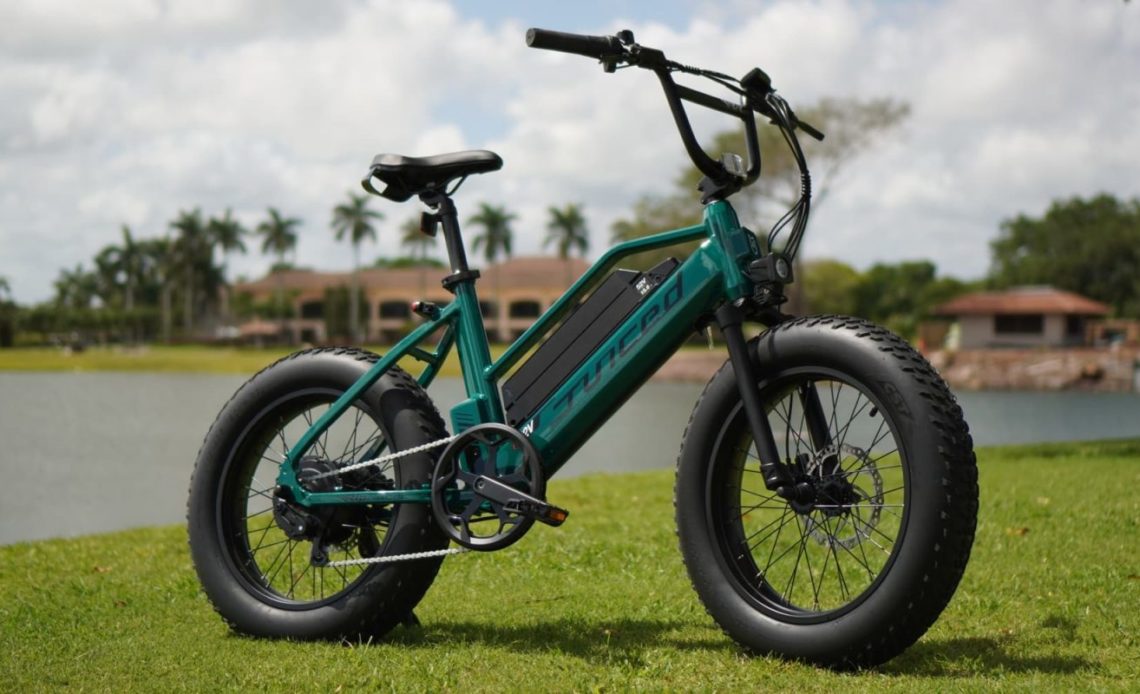 The descriptors “nimble” and “fat tire” rarely go together as well as they do with the Juiced RipRacer. This self-proclaimed fun-sized electric bike deftly combines the exhilaration of go-anywhere electric bikes with the convenience of small-format micromobility vehicles.

In doing so, it makes the RipRacer just as much of a utilitarian e-bike as it is a fun-loving adventure-riding runabout.

It may look small – and it kind of is – but the RipRacer still packs in everything we’ve come to know and love from . That means big batteries, big motors, quality e-bike components, and a general disregard for plain old boring e-bike design.

The bike also marks the first introduction of Juiced’s fancy-pants new second-generation electric bike batteries that come with added features, such as a carry handle and a hidden spot for an AirTag tracking device.

Take a look below to see my video review of the Class 3 version of the RipRacer, and then read on for my complete thoughts on this awesome new electric bike model.

A whole new type of e-bike

The Juiced RipRacer is something of an enigma for an e-bike.

But the RipRacer is actually fairly small and light. At 66 lb (30 kg), it’s not a lightweight e-bike, but it’s decently svelte compared to most fat tire e-bikes that pack on a few dozen more pounds.

And thanks to its smaller size, it easily fits in more places. It takes up less room in your garage, is easier to slide in the back of a truck or SUV, can wiggle itself into an elevator, and is nimble enough to weave through city traffic. The wheelbase is a mere 40.3″ (102 cm), meaning the bike turns on a dime (which, while we’re doing conversions, is 9.6 euro cents).

It’s not that we haven’t seen smaller fat tire e-bikes before. It’s just that Juiced’s is better. And a big part of that has to do with Juiced’s tech.

For starters, you get that highly detailed LED matrix display, or at least you get it if you opt for the . If you get the lower-priced , that bike comes with a more simplified display. Considering the Class 3 version can be unlocked to go 28 mph (45 km/h) compared to the Class 2 version’s limited 20 mph (32 km/h) speed, I highly recommend getting the Class 3 version for the extra speed and fun.

There’s also that awesome new battery. It’s a large capacity 52V 15.6Ah pack with a whopping 800 Wh of capacity (though it’s a smaller 540 Wh pack on the Class 2 version of the RipRacer). The big battery offers tons of range, up to 55 miles (88 km). But more importantly, it also offers new features, such as the ability to hide an Apple AirTag for tracking the battery and/or bike if it should, unfortunately, get stolen. Juiced is also planning on offering a charging dock and base station that turns your e-bike into a power station to run 110V AC devices and smaller USB devices, so this second-generation battery pack has some serious potential outside of just powering your e-bike.

Then there’s the bright LED lighting. Instead of going with cheap and dinky lights, Juiced Bikes outfitted the RipRacer with some high-quality and ultra-bright LEDs. The headlight puts out 1,050 lumens, for crying out loud! That’s enough to light up the road, not just shine into the eyes of some car drivers in a feeble hope that they notice you.

At the same time, there are a few compromises here that help lower the cost and production complexity. The front fork looks like a suspension fork, but that’s just a clever design. It’s actually a rigid fork, meaning there’s no suspension on the bike other than what you get from the 4″ of air and rubber between your rims and the ground.

Next, the bike is a single-speed. I hope you weren’t looking for a derailleur because that ain’t it. There’s a tensioner on the back, but it doesn’t shift gears. Instead, it just keeps your chain from flopping around and also makes it easier to remove the wheel to change a flat tire.

The bike also doesn’t include any fenders or racks as standard equipment. You can add front and rear racks/baskets, plus fenders and other accessories, but they’ll cost you extra.

Even so, there’s a ton to appreciate here with the RipRacer. It’s a powerful e-bike with well over 1,000W of peak power. It has a big ol’ battery with some awesome new features. Those hydraulic disc brakes are strong and grippy. And the geometry makes it just as much fun for hopping curbs as tearing up trails.

It’s the epitome of a go-anywhere e-bike, as long as you don’t mind the lack of suspension. But considering the small size and increased convenience, I’m quite happy with the RipRacer’s current package. The big tires are enough suspension for me, and the bike is so much fun that the term “fun-sized” feels even more appropriate than ever.

This is absolutely an e-bike to check out if you’re looking for high performance in a small package and want to get some pretty good quality components to boot!