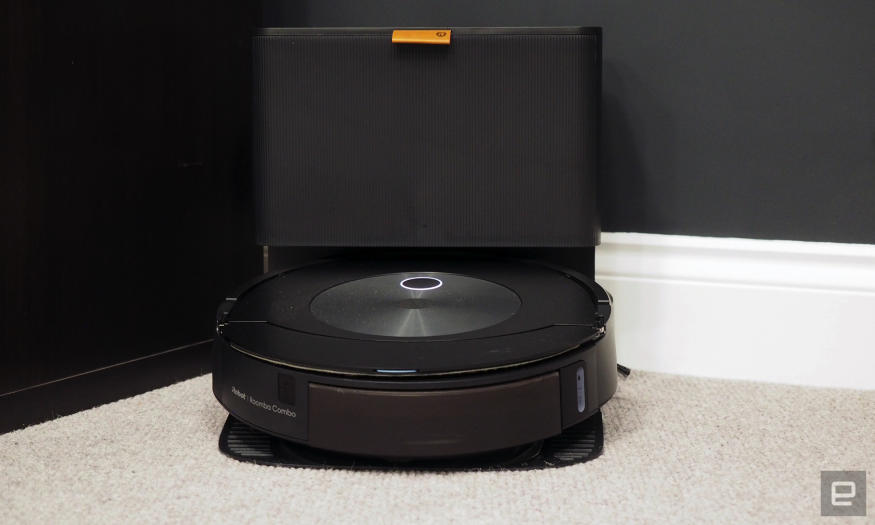 For most people, there’s no such thing as an essential Roomba if you can work your own vacuum cleaner. They’re nice to have, and do a job, but you’ll get better results if you can put the work in yourself. They also require more management than Rosie the Robot from The Jetsons or Red Dwarf’s Kryten. You’ll come to earth with a bump when you see this oversized hockey puck crashing itself into your baseboards, wondering where the future we were promised disappeared to. But, if you judge the new Combo J7+ on its own merits, it makes a far better case for itself than many of its rivals.

The Roomba Combo J7+ is iRobot’s first “true” two-in-one vacuum and mopping robot, doing both without intervention. There’s no need to add or remove a mop pad between missions, and none of the dreaded risk of cross-contamination. After all, if your two-in-one is infused with dirty water, it runs the risk of depositing its juices all over your freshly vacuumed carpets and rugs. That’s a first world problem, but one iRobot believes is a big impediment to people buying a premium floor-cleaning robot.

iRobot’s solution is to have the Combo J7+ hold its mop and pad on top of its chassis, only pulling it down when required. The machine’s sensors identify when it’s rolling over hardwood versus a carpet, and flips down the pad accordingly. It’s a fairly smart piece of engineering, and iRobot’s engineers deserve kudos for finding such an elegant solution. All you’ll need to do is fill the reservoir with water and some cleaning solution, and activate a mission from inside the iRobot app, choosing your dosage level (Eco, Standard or Ultra) before pressing start.

I’ve had the Combo J7+ in my home for three weeks now, set up in my entrance hall, since the ground floor of my home is a mix of hardwood, laminate and rugs. My kids, who have to walk down a dirt track to get to school, love tracking mud and debris into my hallway upon their return. Plus, it means I can send it out after dinner to clean the kitchen floor to deal with the usual raft of child-created crumbs. Although more commonly, I choose to clean the floors during the mid-morning, when my kids can’t complain about the noise the Clean Base makes.

The Combo J7+ is the first Roomba to ship with iRobot OS 5.0, which improves upon the company’s work to avoid dangerous hazards. (I don’t know if I can say “rolling into a pile of dog poop and smearing it all over your carpets” in a way that’s brand safe, so just use your own euphemism.) After each mission, you’ll be asked to review obstacles that the robot detected during the trip, letting it know if the pair of sneakers you left by the back door is a temporary or permanent fixture for the future. The big point, however, is for the camera’s computer vision to identify these hazards and avoid them without having to bump into them.

I will say, I did find the early mapping runs to be a little more frustrating than I may have expected. Part of this was because I had to tidy up everything after my kids before I could send the machine out for a run. And that it was outfoxed fairly regularly by both my welcome mat and the threshold between the hallway and the kitchen. I wish, really, there was a way I could use my phone – with its boat-load of location-aware tech – to help build the map. For instance, I’d be happy to trace a rough outline of the ground floor of my home with my phone using dead reckoning, which you’d think would help speed up the process.

To be fair, this power has grown exponentially over the period of time I’ve had the Roomba in my home. A few days ago, the system asked if I wanted to craft a dedicated cleaning zone around the kitchen table, without any prompting from me whatsoever. That’s obviously a great way to spot-target areas of dirt buildup without having to do the whole kitchen floor every night, too. Credit where due, the Roomba has picked up a good sense of where everything is in my house, and where it needs to direct its energies.

The machine does a great job removing small, loose particles from the floor, but it’s still leaving the odd outlier. Not to mention that, despite a lot of promises to not need much micromanagement, you’ll be filling the Roomba’s water reservoir very frequently. The container can take a fairly piddly 210 ml (around 7 ounces) of water, good enough for 40 square meters (430 square feet) of floor on high dose, enough just about for my modest, British ground floor. But if you’re in a McMansion with floors the length and breadth of a football field, you might need to refill the Roomba in the middle of a job.

In the US, the Combo J7+ ships with the clean base, which will set you back $1,099.99 – a fairly massive chunk of change. Elsewhere, you can pick it up base-free, but if you’re buying a Roomba for the convenience, the base makes plenty of sense. The base is not only where your machine will charge itself, but it has its own vacuum that sucks out any debris that the Roomba picks up and deposits it inside its own bag. If I have a complaint, it’s that I wish the Roomba itself had some of the power of the Clean Base’s own suction, which is about as powerful (and noisy) as a jet engine. I also wish there was a way to disable this feature.

There are parts of iRobot’s sales pitch that leave me almost petulantly shrugging in hostile indifference. Like being able to order your Roomba to clean a specific high-traffic zone by barking a command to your home’s voice assistant of choice. I think using a voice assistant became passé after the third time you tried to impress your neighbors by changing the color of your living room lights in 2013. Yes, for older people, and those with accessibility needs, a good voice assistant connection is vital, but it’s also something that leaves me cold. Especially when it’s a lot easier to just activate a mission from the app, which is beautifully simple to do.

But, despite my objections, I have found this gizmo worming its way into my regular routine more than I ever expected. It’s actually a pleasure to walk back from the school run, see a pile of dirt on the floor and be able to magic it away with the press of a button. And setting it up to mop the floor as well, means that the number times I have to clean it myself has dropped massively. It may not replace your vacuum cleaner, or your mop, but it will mean you don’t have to use them anywhere near as frequently as you normally do.