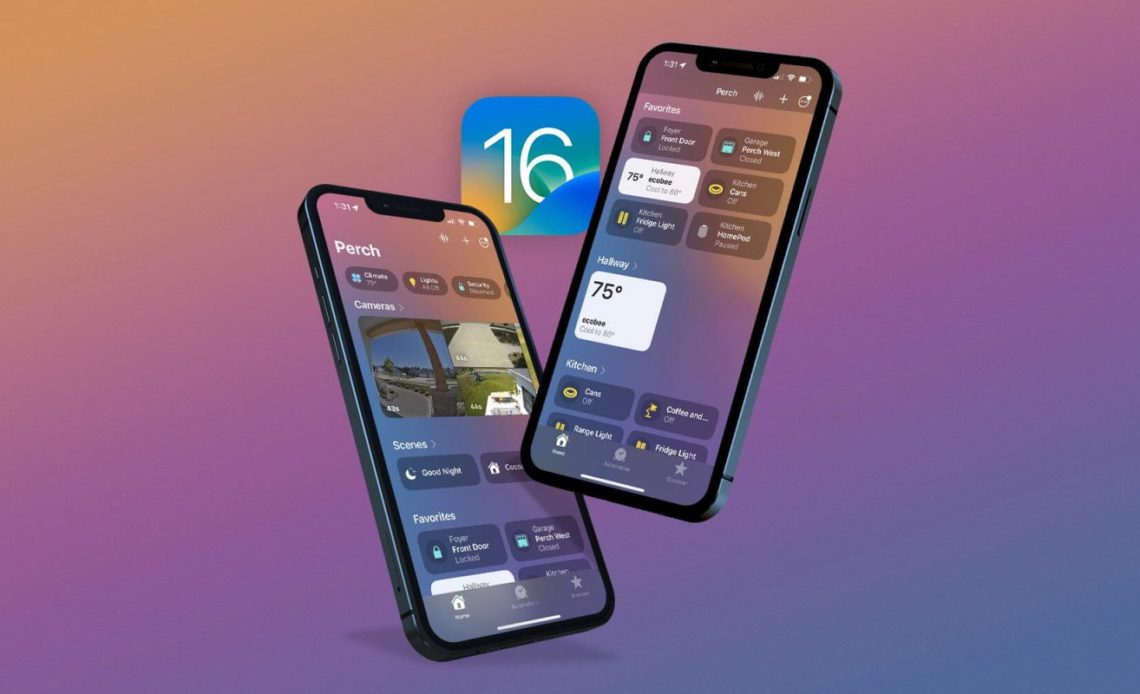 The Home app gets lots of attention in iOS 16 with a fully refreshed design. Additions and changes in the overhauled experience include a new UI and iconography, customizable sections, fresh wallpapers, a more seamless experience, and more.

The Home app has been ripe for improvements for a while and this year with iOS 16, Apple is delivering a major update for the HomeKit experience.

The default layout of the iOS 16 Home app now has:

For the new top category buttons, new functionality includes showing all HomeKit devices, Scenes, and data that are related to it.

For example, tapping the Climate top category shows my Ecobee smart thermostat, our HomeKit-enabled ceiling fans (Lutron Caseta), temperature and humidity, as well Scenes that include any of those “Climate” devices.

One of the notable updates in the Home app is a big shift in how the buttons work to control HomeKit devices.

In iOS 15 and earlier, you would tap a device tile to turn it on or off and long-press to get the more detailed control UI with things like colors, sliders, etc. for fine-grain control.

Now in the iOS 16 Home app buttons behave like this:

Another new feature is the option to resize device buttons, it’s a bit hidden but here’s how it works:

In iOS 15, the option to access the Home app’s settings was quite buried. Now in the iOS 16 Home app, Apple has moved overall settings and other customization buttons to the top.

The + icon in the top right corner includes the option to add an Accessory, Scene, Automation, Room, People, or a New Home.

A really nice improvement with the iOS 16 Home app is the ability to reorder sections. As shown in the image above, “Reorder Sections” lets you customize the overall organization. And choosing “Edit Home View” lets you reorder devices in a given category (previously available in iOS 15).

Another nice update is totally new wallpapers. The one shown off in the screenshots above is one of them with 10 total beautiful gradient choices – of course, you can still use a custom photo too. All of the built-in wallpapers appear to be new.

What are you most excited about with the new iOS 16 Home app? Share your thoughts down in the comments!