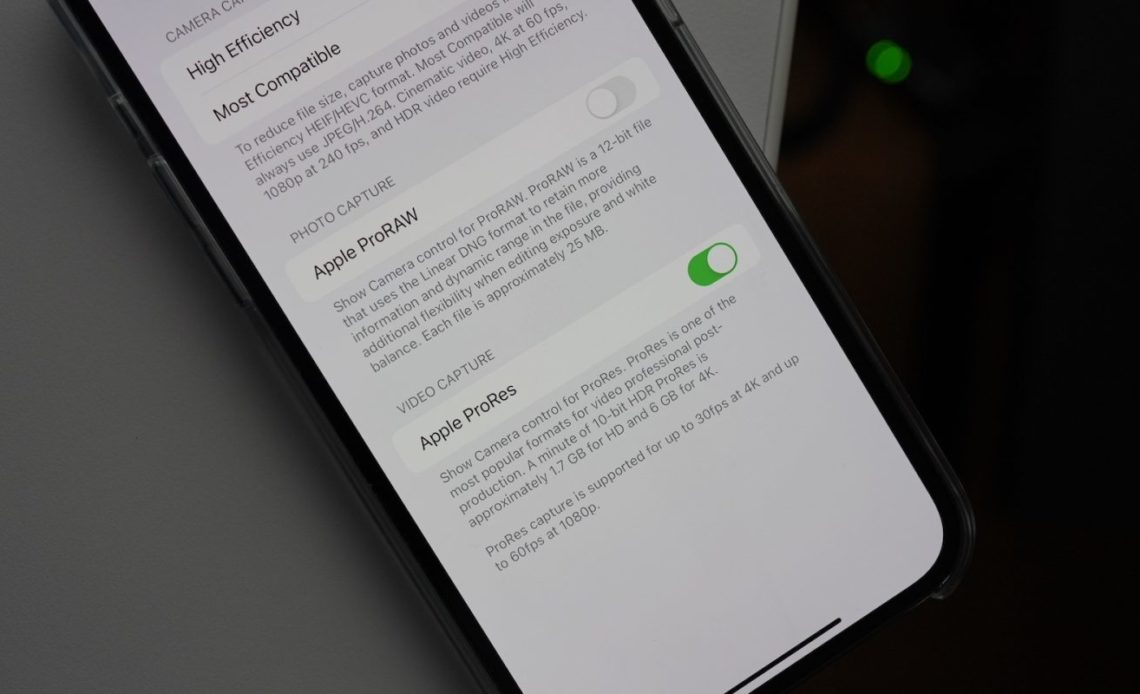 Enabling this switch will show the updated camera controls for Apple ProRes in the default Camera app. Keep in mind that ProRes footage consumes a lot of storage. Apple warns that a minute of 10-bit HDR ProRes is approximately 1.7 GB for HD and 6 GB for 4K.

Once the switch is enabled for ProRes capture, launch the default Camera app, switch to Video mode, and tap the ProRes button at the top of the interface to enable it. Because of the storage requirements, users will see a “Max Time” remaining at the top of the viewfinder that will change based on the resolution and frame rate that you choose to capture ProRes video in.

At the moment, it doesn’t appear that Apple allows users to differentiate between different flavors of ProRes video capture. Filmic Pro, as we noted on Monday, supports switching between four popular flavors in the ProRes family, such as ProRes Proxy, ProRes LT, ProRes 422, and ProRes 422 HQ.

Based on the time remaining estimates, it appears that Apple is defaulting to ProRes 422HQ. After exporting a test video to my Mac, I confirmed that that is indeed the case. As of now, it’s unclear if Apple will support switching to less storage-demanding ProRes family members as Filmic Pro can, or if it will stay locked at ProRes 422HQ for simplicity’s sake.

What definitely stands out between Apple’s implementation and Filmic’s is Apple’s support for Dolby Vision HDR. For those wanting to retain the ability to shoot HDR footage, but shoot in the highest quality, it seems that the default Camera app is the best option for now.

In addition to the adoption of ProRes video capture, iOS 15.1 also brings about the ability to disable the auto macro feature on iPhone 13 Pro devices. Having macro mode switch on automatically was super-annoying, so this is a welcome addition.

What are your thoughts on ProRes video capture on iPhone? Sound off down below in the comments.