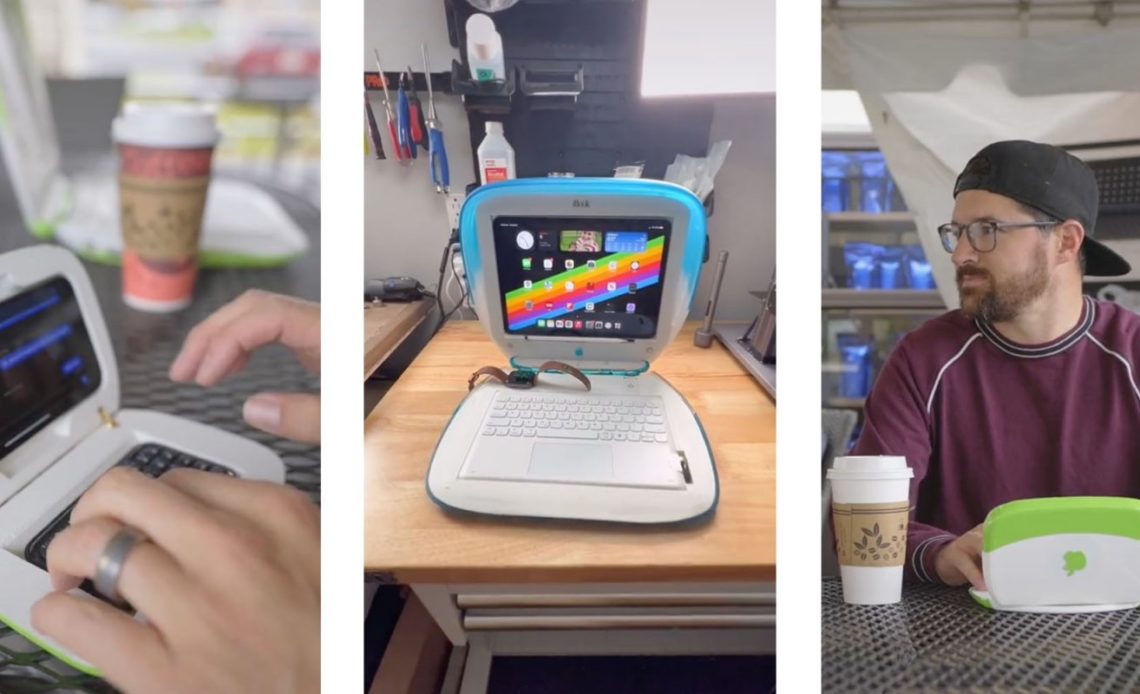 A video producer with a 3D printer has been creating and selling a range of iBook G3 iPad conversions – that is, a genuine iBook G3 case modified to hold a 10.9-inch iPad Air or 11-inch iPad Pro, complete with working keyboard.

Someone asked whether he could make tiny ones for iPhones, and Billy Skipper Hughes couldn’t resist the challenge …

What started as a fun idea for a TikTok video has now turned into a side gig for Hughes after people said they wanted to buy it.

The original video shows him walking into a coffee shop with what appears to be a working orange-and-white iBook G3. But the screen is really an iPad, and the keyboard has been replaced by a Bluetooth one, to make it a fully functional iPad case.

Hughes went on to offer a range of the units for sale, each made from a genuine iBook G3, which he gutted and fitted with a Bluetooth keyboard and 3D-printed parts to hold an iPad.

There’s a USB-C socket on the side, which connects to the iPad, and another one to charge the built-in battery, which powers the keyboard and the Apple Watch charger… Oh yes, he added a Watch charger above the keyboard!

Cute as they are, you do need to have a serious nostalgia kick for the iBook to actually buy one: They cost a cool $1,000 each – or $1,450 for a lime one. There’s also a waiting list. If you already have the iBook, he will do the conversion for $750.

You can watch a video walkthrough of the iPad case below.

A commenter asked whether he could make tiny ones for iPhones, and, sure enough, he did!

This is a completely fabricated casing, with 3D-printed parts, to look like a tiny version of the G3.

If you love the idea but don’t want to spend a thousand bucks, Hughes also offers an iBook-style skin for your 14- or 16-inch MacBook Pro – for a rather more affordable $25.

Check out all his TikTok iBook videos, as well as the iPad walkthrough below.