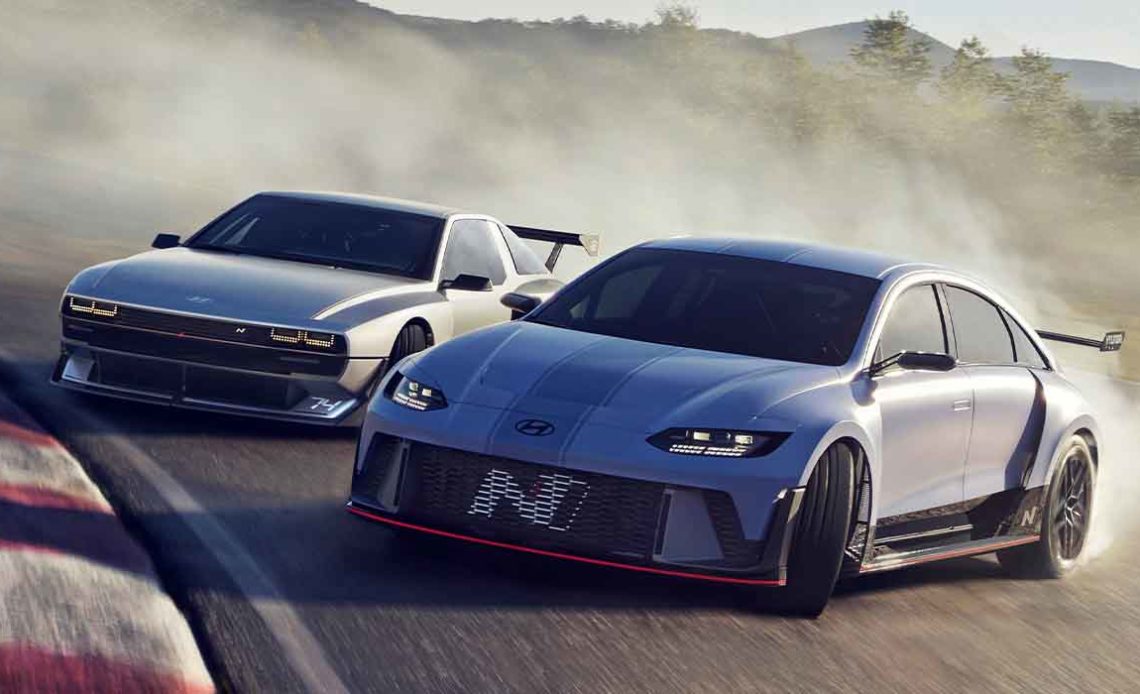 The dawn of performance EV tuning is upon us. After teasing an upcoming N series of EVs, Hyundai has unveiled two “rolling brand” concepts offering upgraded nods to both the automaker’s past, present, and future. These concepts should help wet our beaks until Hyundai officially launches the IONIQ 5 N next year.

IONIQ continues to grow and will join the N sub-brand

Two summers ago, Hyundai launched IONIQ as its own electric brand consisting of three initial models. This began with the IONIQ 5 crossover EV, which is currently available and remains in high demand in all its respective markets.

During the initial IONIQ brand launch, Hyundai shared details of two additional EVs to follow, the IONIQ 6 sedan and IONIQ 7 SUV. Earlier this week, Hyundai delivered the global debut of the IONIQ 6 with much hype.

At the end of one of its launch videos, all three IONIQ models are shown racing down a track side by side. Suddenly, from the other direction, another vehicle zooms by, followed by text stating that IONIQ N branded EVs are coming. Have a gander:

It’s true. Hyundai has confirmed plans to add the electrified IONIQ brand to its N and N Line of performance variants. This performance road car sub-brand was launched in 2017 with Hyundai i30 N. In a press briefing regarding the IONIQ 6 debut, Hyundai executives told us that N EVs were coming and we’d learn more this week.

Here we are, on the cusp of another beautiful summer weekend, and thanks to Hyundai, we have two new performance EV concepts we can tape up on our garage walls as we await the launch of the automaker’s first official performance EV model – the IONIQ 5 N.

Before then though, let us gawk over the two EVs Hyundai is calling “rolling lab” N models – the RN22e and the Vision 74.

Hyundai’s RN22e N EV concept based on the IONIQ 6

Hyundai unveiled the two concepts in a press release this morning as demonstrations of the automaker’s electric vision for its N performance sub-brand. Hyundai’s “rolling labs” are where the automaker tests and verifies its technologies with the goal of applying them to future models.

In this case, both of these Hyundai N EVs will remain concepts but feature much of the tech we will see in future N branded models, beginning with the IONIQ 5.

Moving on to the RN22e – this performance EV is based around the recently debuted IONIQ 6 electric streamliner and represents the first N model on Hyundai’s E-GMP platform. The name is derived from the “rolling lab” of the “N brand” developing an “EV” in “2022.” Per the release:

RN22e is tested to maximize N’s three performance pillars, starting with ‘corner rascal.’ N has been developing cornering capability since the brand launch and has been providing e-LSD, Corner Carving Differential, for most N models. RN22e elevates the corner carving feel with inevitably heavier weight, by exploring torque vectoring by twin clutch. Moreover, the 3D printed parts reduce weight and keep the rigidity for better corner attack. Equipped with AWD, RN22e provides optimized torque distribution according to different drive modes that allows drivers to choose the torque power on the front and rear wheels.

Next up is Hyundai’s high-performance EV/hydrogen fuel cell hybrid N concept called the Vision 74. This N concept combines new EV technology with a nod to Hyundai’s past in the form of the 1974 Pony Coupe concept.

Although the sports car concept never reached production, a four-door sedan version was produced from 1975-1990 and was Hyundai’s first mass-produced vehicle. The automaker recently celebrated its achievements with an all-electric concept version. Per the release:

Hyundai’s engineers developed a hybrid structure of a battery-electric in combination with an FCEV system, which is placed in an all-new layout. By having fuel cell system and battery-electric powering the N Vision 74 together, the cooling efficiency is improved, while the two different power sources can be used depending on different driving conditions. This fine-tuned logic system enables better torque vectoring by twin motors on the rear, allowing a precise and responsive cornering experience. Moreover, N Vision 74 explores the balance between the performance and cooling with a three-channel cooling system.

According to Hyundai, the Vision 74 is built on the most advanced hydrogen fuel cell system that the N brand has ever created. Here are some of its specs:

Hyundai’s next EV will be the IONIQ 5 N

Although Hyundai has barely touched upon the subject, it has confirmed that the IONIQ 5 N will be its first performance EV to reach production. It is expected to reach the global market sometime in 2023, with more details to follow.

We were hoping to learn more about the N version of the IONIQ 5 this week, since it has been all but confirmed in the last six months or so. But it appears we will need to wait longer. Luckily, Hyundai has provided us with two truly cool N EVs to rave about – even if they will remain concepts.

You can check both models in action in the full N Day launch video below: