Huawei’s FreeBuds 3 are noise-canceling AirPods for your Android

Huawei has been making truly wireless earbuds for several years now, inspired (if that’s the word) by Apple’s literally traffic-stopping AirPods. While we wait for Apple to upgrade its headphones (probably in a week or so), Huawei unveiled its third-generation Freebuds, and they're an interesting proposition -- especially if you're an Android phone owner.

For Huawei, IFA is usually the place where it reveals its latest mobile chips, and this year isn't any different. Alongside its latest phone chip, the company had a new slice of Kirin silicon -- the wearable and headphone-centric A1. It's apparently the world's first Bluetooth 5.1 and Bluetooth Low Energy 5.1 chip. Why should you care about having it in your next pair of wireless headphones? Well, the chip can offer a dual-channel Bluetooth connection, which means up to 30-percent lower latency and 50-percent lower power consumption -- crucial stats for tiny audio products. Because of the Huawei chipset, this functionality will only be enabled on this company's phones for now. 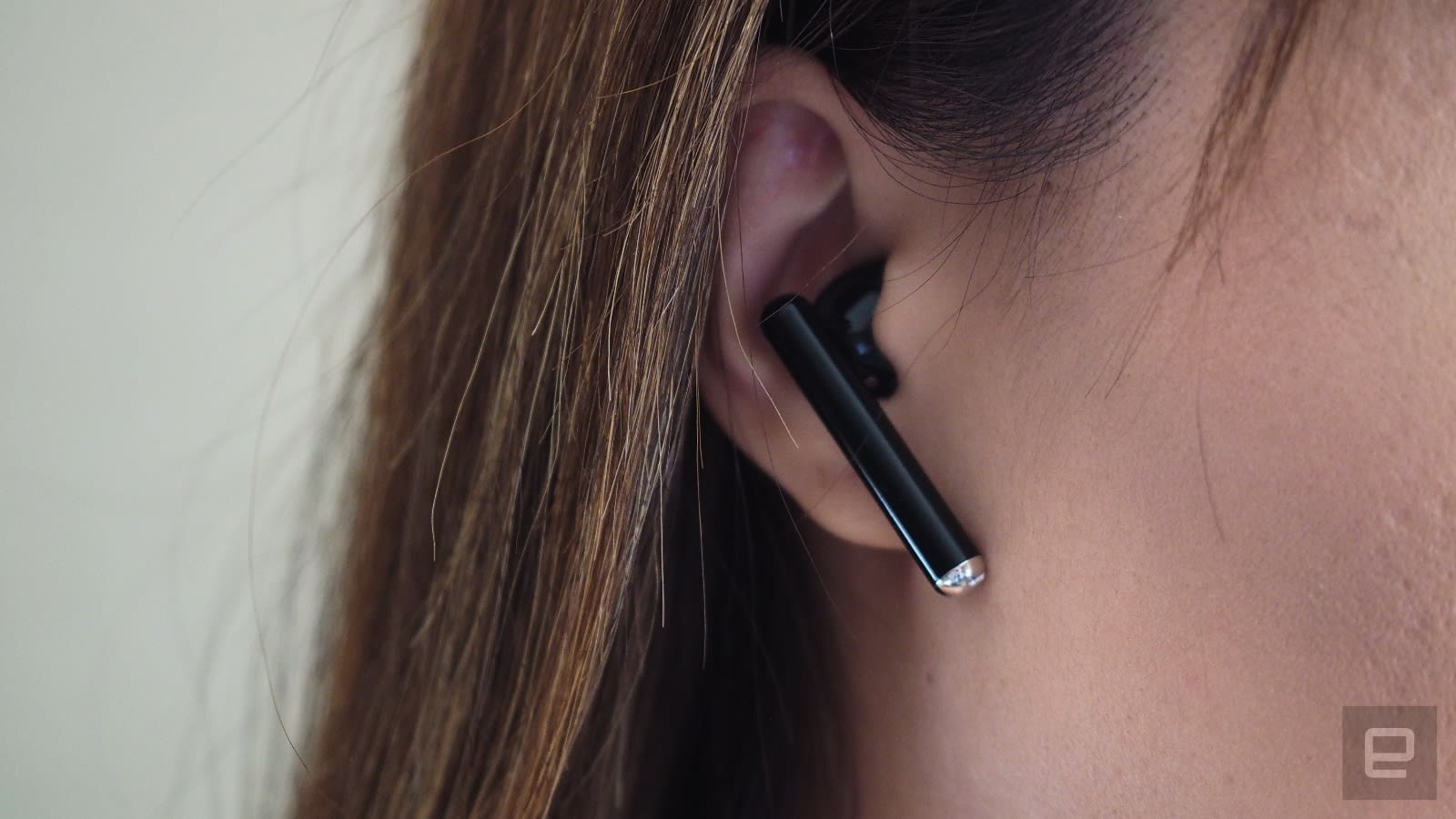 The FreeBuds 3 are the marquee product for this new chip, and instead of going for the in-ear bud design of most true wireless headphones, it's keeping the stemmed earbud design that sits just inside your ear, a la AirPods. They will come in a circular carry case, in black or white gloss color options, and this will top-up the headphones up to 20 hours. The FreeBuds themselves will run for four hours in your ears.

The killer feature is active noise cancellation (ANC), a rarity for this kind of wireless headphone design -- Huawei says they're the world's first open-fit ANC headphones. You can tell that the company has gone to efforts to ensure the FreeBuds 3 are comfortable for open-fit buds -- they're far more polished than the predecessors. I think the biggest deal-breaker is whether you can tolerate the open-fit. I prefer rubber-tipped buds, as I appreciate the seal in my ear and how it blocks out noise. Others will (and do) disagree.

Ambient noise cancellation here should help alleviate that though. Not only can the ANC handle up to 15dB ambient noise reduction for each ear canal, but Huawei says the tips of each headphone can capture vocal vibrations through a "bone sensor." This detects when you're speaking and helps clarify and amplify when you're talking on calls.

It's another Huawei claim at this stage, but the sensor paired with a specially designed mic duct apparently can work their magic so well you could conduct a "crystal clear" conversation while cycling at speed. Other specs worth noting is a 190ms latency, which trumps latency figures for Sony's incredible WF-1000XM3 buds and both iterations of Apple's AirPods -- it's an important thing for anyone using their headphones for gaming or watching videos. 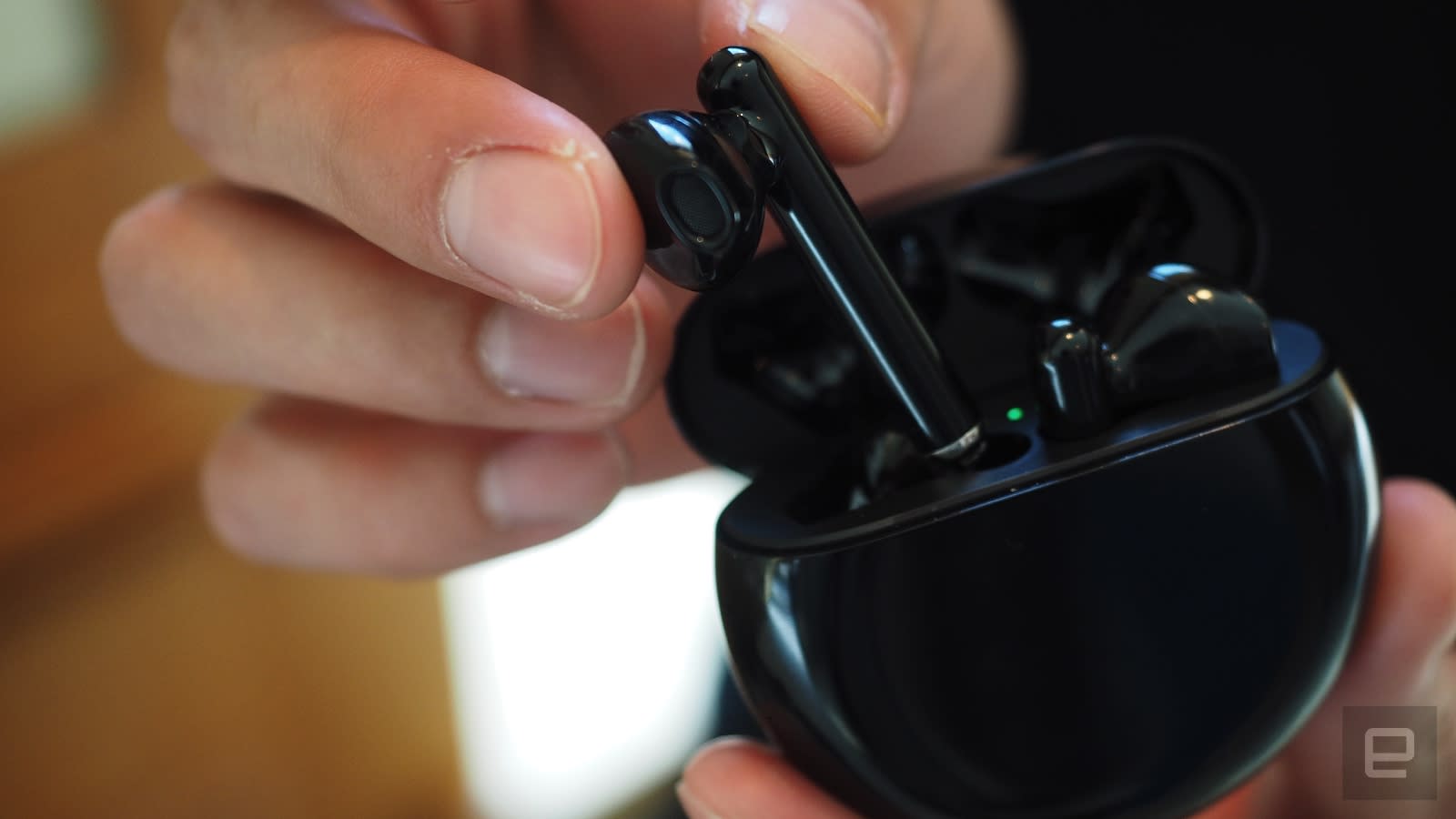 Perhaps the most interesting feature on the headphones comes from Huawei's companion app. While I only saw it in Chinese, it housed an ANC dial that, unlike sliders on Sony's headphone app and others, modulated the noise cancellation. It was less about affecting the level of noise cancellation and more about what it was cancelling out. (Yeah, I know I'm still a little confused myself.)

What this means is that users like myself (and Reviews Editor Cherlynn Low in the video above) could calibrate the noise cancellation to target what we didn't want to hear, whether that's less airplane hum or cafe chatter. It's pretty damn cool. A Huawei spokesman said that people might find some ANC works better than others and that it's down to how people's ear canals are all shaped differently. While Cherlynn found the ANC on our demo unit effective, myself and my questionable ears (I had a spate of tinnitus at IFA) could not detect any change. Once I could tweak the NC profile, however, I was in business.

Sound quality seemed on par with Apple's AirPods, though the ANC (which was a little bit too weak for me) helps Huawei's spin inch ahead. I've been spoiled by a few days of testing Sony's rather stellar in-ear truly wireless buds -- and its own ANC -- so I know sounds quality for this category is constantly improving. Sony's still sounded better, but if you're looking for open-fit buds, at this early stage, Huawei's buds seemed a strong contender. More testing is definitely needed.

Huawei's Alex Wang said that the FreeBuds 3 would be cheaper than the $199 AirPods but didn't state a specific price. And, perhaps unsurprisingly, no comment on the chances of US availability. In Europe and other territories, however, the headphones will launch next month.