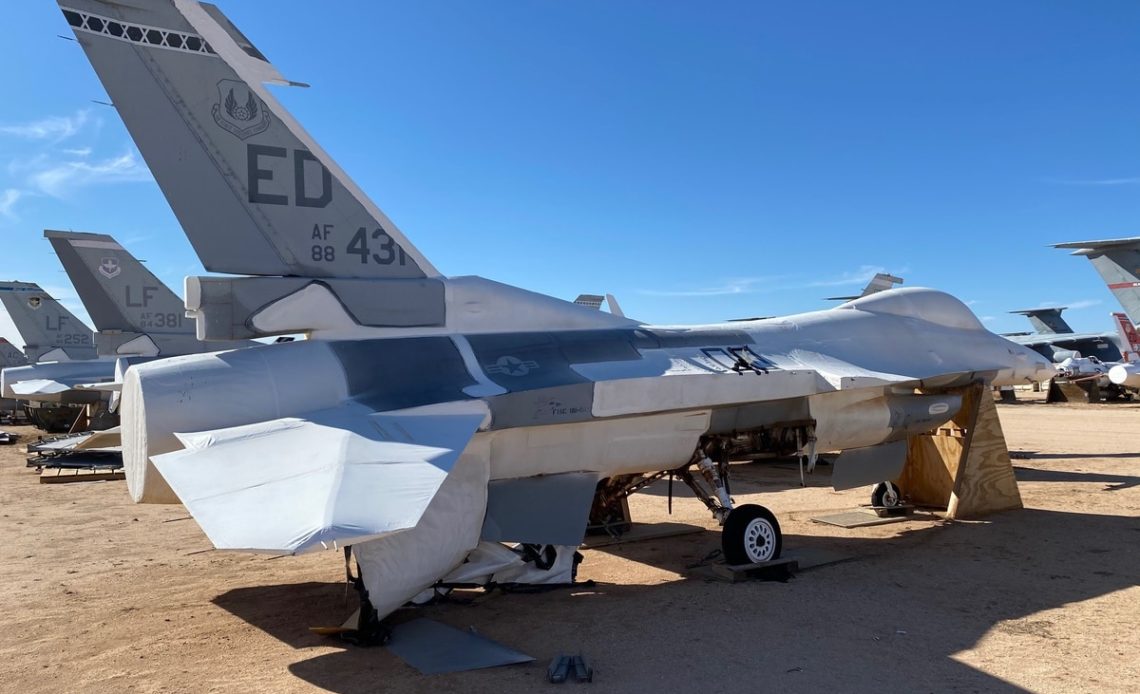 WASHINGTON — The U.S. Air Force wants to make a digital twin of the F-16, hoping to cut down the time and money it takes to sustain its most prolific fighter.

Over the next four years, the Air Force will pluck two F-16s from the boneyard, disassemble them, and use “digital engineering” to create an exact digital replica of the airframe and many of its major subsystems. The twin will allow the service to simulate future wear on the aircraft, maintenance and upgrades, as well as provide a path for the service to find new manufacturing sources for F-16 parts.

Wichita State University’s National Institute of Aviation Research, or NIAR, will create the digital twin for a projected cost of $27 million. The service intends to award a $19 million contract for the first phase of the effort by September, an Air Force Materiel Command spokesman said in response to questions from Defense News.

“Our goal is to create a full-scale 3D model of the aircraft, with the exception of the engine,” said 1st Lt. Connor Crandall, the program manager within the F-16 program office, which will oversee the digital twin effort. “The data will be used to help address future parts obsolescence and mitigate supply chain risks because we won’t have to rely on legacy manufacturing sources and processes. We’ll have the 3D models and designs that we can send to the manufacturers we choose.”

Lockheed Martin, the original manufacturer of the F-16, will receive access to the digital models in exchange for providing models and technical expertise as a subcontractor to NIAR, the command’s spokesman said.

The 1970s-era F-16 makes up the largest part of the Air Force’s fighter inventory, with more than 1,000 jets in service.

The F-16 isn’t typically thought of a problem child in terms of fleet readiness, as its mission-capability rates have held steady in the low 70 percent range over the past several years. However, the Government Accountability Office has noted that — because of the aircraft’s advancing age and continued difficulties in sustaining the aircraft — the F-16 program did not meet annual mission-capable goals from 2011 to 2019.

“Some F-16 aircraft are operating beyond their expected service life with maintenance and supply challenges,” the GAO stated in a November 2020 report. “Planned actions to mitigate these challenges include extending the service life of the aircraft, identifying all parts that need to be replaced during the inspection phase of maintenance, and identifying alternate vendors for parts.”

The service already identified two F-16s — currently in storage at the “boneyard” run by 309th Aerospace Maintenance and Regeneration Group at Davis-Monthan Air Force Base, Arizona — that will be transferred to Wichita and disassembled.

From there, NIAR will identify and catalogue each part, strip all paint and sealants from components, and then scan them using a high-fidelity laser scanner, the command spokesman said. After NIAR creates a digital model of each part using the scanned data and original engineering models, it will assemble those parts together, creating a digital version of the aircraft.

Although the Air Force will not create a twin of the F-16′s engine, it plans to model some systems that typically require frequent maintenance, such as the fighter’s environmental control, hydraulic and fuel systems.

Having a digital environment where engineers can simulate different ways to update and repair the jet will save money by helping maintainers eliminate ideas that are difficult or impossible to implement, said Capt. Jamee Boyer, an F-16 structural engineer.

“With a 3D model, we can model different solutions in a virtual environment and see if they work, before having maintainers remove parts that may not need to be removed,” Boyer said. “Consequently, this would reduce maintenance workload, provide an innovative tool for engineers and prevent aircraft being removed from the flying schedule.”

The two F-16s disassembled during the effort will not return to service, the command spokesman said. Instead, the service plans on using those parts to sustain other F-16s.

The Air Force is using digital engineering to build new systems like the Boeing T-7 training jet and Northrop Grumman’s Ground Based Strategic Deterrent — meant to replace the inventory of Minuteman III intercontinental ballistic missiles — from the ground up. But the service also found it can create digital models of portions of legacy aircraft to improve sustainment efficiency, said Darlene Costello, the acting assistant secretary of the Air Force for acquisitions, logistics and sustainment, during a Thursday event with the Potomac Officers Club.

For example, to re-wing the A-10 Warthog, the service made a digital model of a portion of the aircraft. For the B-52 engine replacement program, it modeled the engines, the interfaces and the engine’s integration with the bomber.

“It’s going to be important for us all to be supportive of that and work together … so that we can get to the solution that gives us the speed we need and the agility that we need to meet the war-fighter requirements,” Costello said.