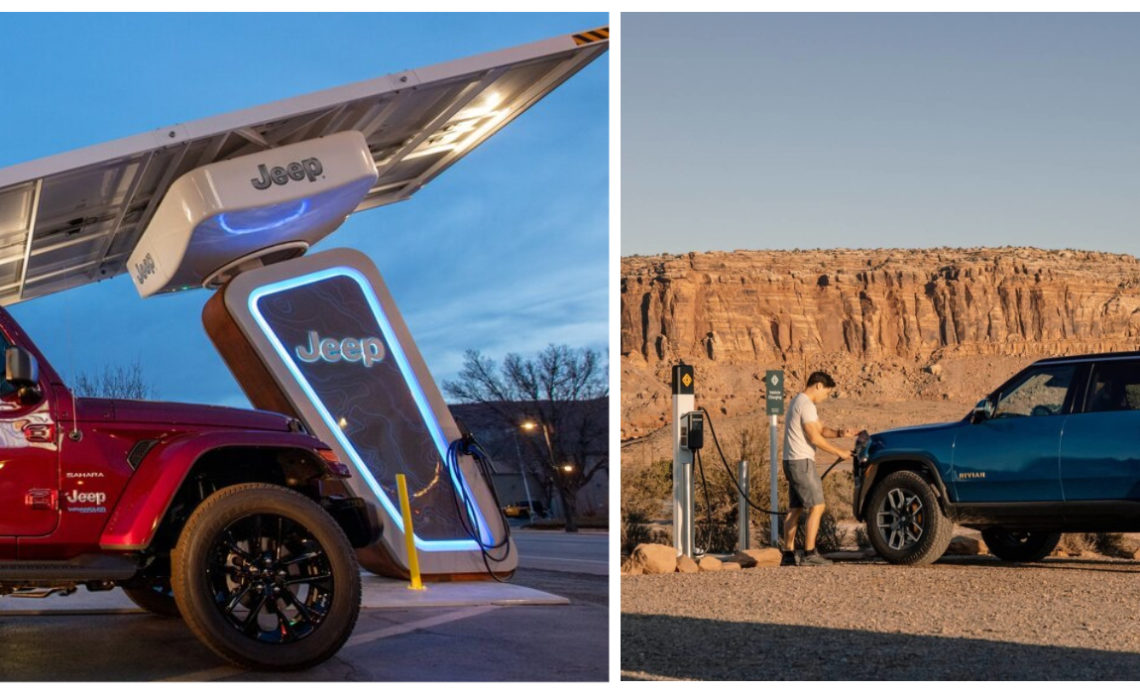 Owning a Jeep comes with the perk of being able to drive both on and off-road. To accommodate its drivers who tend to take the road less traveled, Jeep released plans to roll out solar-powered EV chargers across popular off-roading trails. Meanwhile, Rivian, a new favorite in the EV industry and expected competitor in the rugged SUV market, also plans to launch its own charging network for off-road enthusiasts. How do the two compare?

Jeep’s parent company Stellantis announced in March the rugged SUV automaker would be installing charging stations at Jeep Badge of Honor off-road trailheads to promote the launch of its new 4xe plug-in hybrid.

Since then, we learned more about Jeep’s electrification plans and how the company plans to take on incoming electric competitors such as Rivan, who is also targeting the adventure-vehicle crowd with its R1T EV truck and R1S electric SUV.

Jeep revealed its first fully electric vehicles earlier this month, alongside plans to “become the global zero-emission SUV leader.” The automaker will release four all-electric SUVs launching in North America and Europe by 2025. Jeep’s future electric vehicles will include:

However, as Tesla has proven, having a convenient charging network for drivers is essential to ease range anxiety and promote greater EV adoption. It’s a strategy that the majority of automakers, for some reason, have avoided until recently.

In 2020, Electrek learned Rivian was working on a charging network called the Adventure Network, which the EV startup later revealed in full. Rivian’s Adventure Network is a series of fast-charging sites along popular routes and trails that allow Rivian EV owners to charge up conveniently, much like what Jeep is planning. Let’s see how the two compare.

Jeep’s CEO spoke at the Detroit Auto Show, saying the automaker has, in collaboration with Electrify America, deployed four Level 2 (240V) EV chargers on some of the most popular off-road trails, including at Moab, Utah, Big Bear, California, and the famous 22-mile Rubicon Trail in Pollock Pines, California.

Electrify America is partnering with the automaker to deploy and operate the Jeep-branded EV chargers that will either use solar power or be connected to the grid across the United States. Jeep claims these are part of the initial 18 to be installed on “badge of honor” trails.

Jeep owners can use a custom app (by Electrify America) to find the chargers and monitor their session.

Meanwhile, Rivian plans to install over 3,500 fast chargers (level 3) across the 600 sites in North America for its Adventure Network. The EV startup will install chargers across offroad trails, parks, and other popular routes.

Rivian’s launched its first DC fast charging sites in June, starting in Colorado and California. The Adventure Network chargers are powered by 100% renewable energy and deliver a charging output of over 200 kW.

According to Rivian, the fast chargers will be exclusively for Rivian owners, but they also offer Rivian Waypoints, a series of level 2 chargers designed for any EV. Owners can find Adventure Network chargers through Rivian’s app.

As an electric vehicle enthusiast who also enjoys the occasional off-roading, these charging networks are essential to promote widespread EV adoption. As batteries advance, we will be able to drive electric vehicles much farther into the unknown than their gas-powered counterparts.

Until then, accessible chargers are essential in both populated and less traveled places.

Although Rivian’s Adventure Network is much more advanced and practical at this point, at least Jeep is doing something to try to convert its user base to electric.

It’s funny seeing both old and startup automakers taking a page from Tesla’s playbook and building a network that fits the needs of its drivers. Tesla is building a nationwide network of superchargers, while Jeep and Rivian target those EV drivers who look to get off the road with convenient chargers to power up.