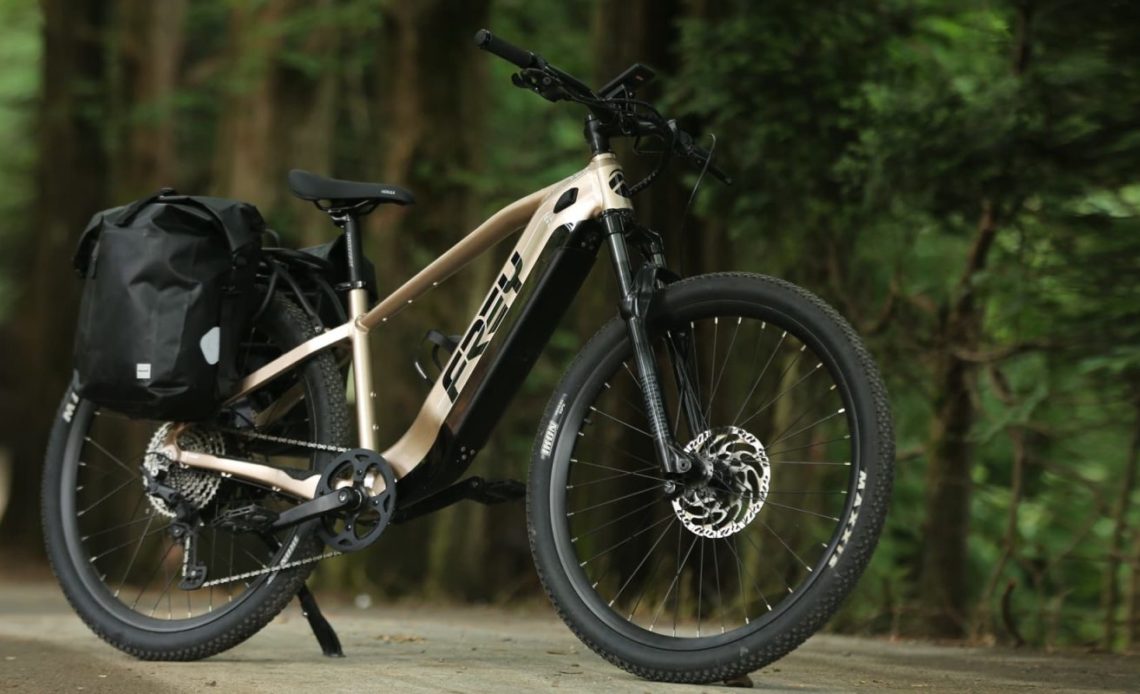 The move is significant because FREY has long been a high-end electric mountain bike manufacturer that has focused on powerful mid-drive motors.

That focus on high-end design has historically also pushed the brand’s prices into the $3,000 to $5,000 range for many of FREY’s popular electric mountain bikes.

But the new FREY Runner with a more economical hub motor drivetrain starts at just $2,580. That might sound like a premium over the many low-cost e-bikes on the market, but FREY has always specced their e-bikes with higher-end components designed to withstand harder riding.

My first run-in with FREY bikes was at a bike park in China where riders more skilled than myself sent these things soaring several meters in the air. Don’t try that with your local direct-to-consumer e-bike!

The FREY Runner is available with either 29″ or 27.5″ wheels, and there are three frame sizes for each wheel spec available: M, L, and XL.

The bike may offer a simplified drivetrain in the form of a hub motor, but that doesn’t prevent it from coming with many of the same higher-quality components found on the rest of FREY’s e-bikes.

That means a RockShox Recon fork (either 29″ or 27.5″ depending on the wheel size selected), four-piston Tektro HD hydraulic disc brakes, Maxxis tires, Shimano Alivio 9-speed transmission, and a huge 48V 21Ah battery for 1,008 Wh of capacity.

The battery is nicely enclosed in the aluminum frame’s downtube, though it can be unlocked and removed for transporting the bike or charging the battery remotely.

The battery powers three different motor options, depending on where you ride. Bafang hub motors rated for either 250W, 500W, or 1,000W are available as options. Europeans will likely have to settle for the smallest motor option due to local power regulations, while other areas will be able to take full advantage of FREY’s two larger motor options.

All of the motors are paired with a torque sensor in the pedal assist system to offer responsive and intuitive-feeling performance.

Designed for touring and bikepacking, the FREY Runner comes with an included rear rack. It is also rated for a load of up to 150 kg (330 lb), which means it can carry both large riders and large gear loads.

FREY hasn’t released speed specs yet, though the company’s other e-bikes are known to reach speeds in excess of 30 mph (51 km/h) when unlimited. The FREY Runner likely won’t be quite as fast, but we wouldn’t be surprised to see the 1,000W model still offering speeds high enough to max out the Class 3 or speed pedelec limits of 28 mph (45 km/h).

This type of touring electric bike has become a popular category, offering double-duty use as a trail bike and an urban bike. They are a bit more popular in Europe than in the US market, but the more rugged design required for trail riding has led some urban riders to favor this style for its longevity and higher build quality.

While I haven’t had the chance to test this specific FREY model yet, I’ve ridden a number of the company’s other e-bikes and have always been impressed with their value. The bikes combine high-quality parts with lower-cost production (and a nearly nonexistent marketing budget), meaning they can rival the bigger European brands in performance at a fraction of the cost. The downside though is that they don’t yet have a robust European or US dealer network and shipping times can sometimes be lengthy.

While we wait to see the first Runners head stateside, check out my last review of a FREY e-bike below.